"The issues are simple," Lennart declared. She repeated what she had said more than once at the conference table.  "Mirkheim is too valuable, too strategic a resource, to be allowed to fall into the claws of beings that have demonstrated their hostility.  I include certain human beings.  The Commonwealth has a just title to sovereignty over it, inasmuch as the original discoverers represented no government whereas the Rigassi expedition was composed of our citizens.  The Commonwealth likewise has a duty to mankind, to civilization itself, to safeguard that planet."

...van Rijn said, "what about those original discoverers of Mirkheim, ha?  What rights you think they have?" 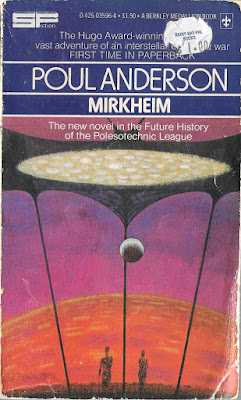 Back in December of 2014 I bought a pile of SF paperbacks while on a visit to Columbia, South Carolina.  Looking over the stack of twenty volumes via the magic of my incompetent twitter photography (the light in that hotel room was terrible!), I believe I have read (and blogged about!) seven of the novels--Sandworld, Day of the Beasts, Diabolus, Orbitsville, Night Walk, Gender Genocide, and The House That Stood Still--and at least something from eight of the short story collections--The Proxy Intelligence and Other Mind-Benders, Future Corruption, The Liberated Future, Infinity Two, The Astounding Science Fiction Anthology, Special Wonder: Volume 2, Seven Trips Through Time and Space, and On Our Way to the Future.  I sometimes fear I buy way more books than I will ever read, but in a little over three years I checked off 15 of the titles of this big binge purchase, which isn't so bad.  And this week I checked off a sixteenth, Poul Anderson's 1977 novel Mirkheim.

Mirkheim is a component of Anderson's sprawling future history which, at isfdb, goes by the name "Technic History," and, on the cover of this book and various others in my library, "Future History of the Polesotechnic League."  It was dedicated to Jerry Pournelle, and has been reprinted numerous times on its own, and as part of Baen's Rise of the Terran Empire omnibus.  Let's double check the seals on our spacesuits, toggle on our voice translators, strap on our blasters and check it out!

The 22-page Prologue, which describes in episodic fashion happenings in the decades before the events related in the main text, clues us in to some of the themes of Mirkheim, which include conflict between social classes and social and political change.  On Earth, interstellar merchant Nicholas van Rijn (we met van Rijn in the stories collected in Trader to the Stars and have since encountered him a few different places) complains about pending legislation that will give labor unions and the government more power at the expense of business concerns and individuals, and it is hinted such legislation is part of a galaxy-wide trend of increasing corruption and diminishing trust in large public institutions.  On planet Babur the primitive natives are gradually deepening their relationships with the Solar Commonwealth (the big space federation centered on Earth), the Polesotechnic League (an association of the galaxy's big interstellar businesses), and other outside entities, conducting interstellar trade and developing into a modern spacefaring society; the Baburites' main link with the universe beyond their own system is human scientist Benoni Strang, a commoner from planet Hermes who harbors resentments against Hermes's aristocrats and holds close to his vest his own grand and mysterious ambitions.  On planet Valya, Lord Eric Tamarin-Asmundsen, one of those very Hermes aristocrats (and van Rijn's illegitimate son by the ruling Grand Duchess of Hermes), tries to convince a big unscrupulous mining firm to stop running roughshod over the other, much smaller, colonial businesses on Valya as well as the stone-age native Valyans.  Van Rijn's protege, David Falkayn, another Hermes aristocrat (but one who has been away from home for a long time), also figures in the prologue--it was his team that discovered Mirkheim, a planet of unusual chemical and physical composition due to its proximity, half a million years ago, to a supernova.  (We met Falkayn in the tales collected in The Trouble Twisters.)  Mirkheim, over two weeks hyperspace flight from Earth, lies only a few days travel from Hermes and Babur. 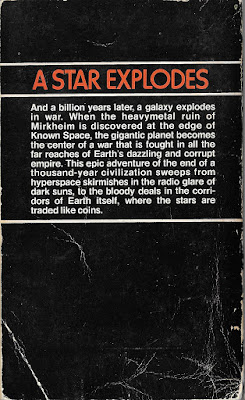 As the main text of the 216-page novel begins, Mirkheim is a catalyst for major trouble, as both the Solar Commonwealth and the young government of a newly united Babur claim the planet and its extremely valuable minerals; so useful are these minerals they have the potential to spark a technological revolution.  For years a company with ties to Falkayn and van Rijn has been mining the planet, keeping Mirkheim's existence a secret the whole time, but now the cat is out of the bag.  Van Rijn sends Falkayn's team, which includes Chee Lan the little cat-raccoon person and Adzel the hulking reptilian Buddhist, to the Hermes-Mirkheim-Babur region to gather information and hopefully prevent open hostilities that might threaten van Rijn's profits.

Mirkheim is classic old school SF, with space ships, space suits, hyperspace, aliens friendly and hostile, science lectures, and characters who defend the rights of the individual and the free market against the dead hand of government.  There is plenty of adventure stuff: people wear disguises, people get captured and escape, space ships chase each other, there are infantry firefights and a major space naval battle.  While the violence is exciting, Anderson makes an effort to keep things mature, realistic, and literary.  For example, rather than romanticizing war, he stresses the tragedy and pointlessness of it, airing standard libertarian arguments--Adzel ponders, "What does it [Babur] hope to gain?  As a world, a sophont species, it can only suffer a net loss by replacing peaceful trade with armed subjugation" and portraying politicians using war and security as an excuse to flout the law, increase their power and abuse their political opponents--and conjuring up scenes in which men bid sad farewells to their families before going into harm's way and people at risk in the battlezone think of the homes and families they may never see again.  I thought that in some of these scenes Anderson might be purposefully echoing passages from the Iliad; as he so often does, in Mirkheim Anderson advertises his own erudition and tries to turn us on to high culture, this time quoting Tennyson and Wordsworth and referring to sculptor Gustav Vigeland.

Along with the war we get the politics, and there are lots of negotiations between people with opposing interests and ideologies.  Anderson speaks the language of people (like me) who read the reason.com blog every day and follow the Cato Institute on twitter--he reminds us that all government is based on coercion, he depicts regulatory capture, he moans that so many people would choose security over liberty and that so many people are motivated by envy.  Remember when that letter writer to Fantastic in 1973 complained that Anderson was like the William F. Buckley or Ayn Rand of SF?--if he was still reading Anderson four years later, Mirkheim must have really made him grind his teeth! 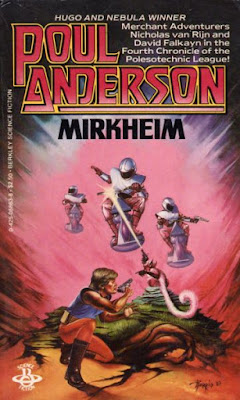 The foreground plot of Mirkheim can be summed up thusly:  There hasn't been a major interstellar war for generations, so the Commonwealth space navy is relatively small, and in a short period the hydrogen breathing Baburites have been able, with the help of some mysterious humans and other oxygen-breathers, to build up a navy that can rival those of the Commonwealth, the League, and the various independent human planets like Hermes.  The Baburites seize control of Hermes, and the Hermes fleet, led by van Rijn's illegitimate son Lord Eric, flees to Earth.  Another Babur squadron repels a Commonwealth squadron from Mirkheim.  By the time David Falkayn, Chee and Azdel arrive on the scene it is too late to prevent war, but they manage to escape capture by the Baburites and even collect some info from the wreckage of a Baburite vessel knocked out during the battle at Mirkheim.  When Falkayn and company get to Earth they find the left-wing elements of the Commonwealth government are using the war as an excuse to seize control of all space craft and rein in those independent business entities (like van Rijn's) which haven't been already co-opted by the government.  Lord Eric, van Rijn and Falkayn and his buddies work together to sneak Falkayn back to Hermes, where Falkayn finds that Benoni Strang has been given authority over the planet by the Baburite conquerors and is turning Eric and Falkayn's homeworld into a communist dictatorship.  Having figured out the identity of the humans behind the Baburite war machine and its conquest of Mirkheim and Hermes, Falkayn sneaks back to Earth and he and van Rijn lead a successful effort to drive a wedge between the Baburites and their human enablers/manipulators via guerrilla warfare and piratical raids, bringing them to the negotiating table and ending the Mirkheim crisis.

The larger, background, plot is about how the Commonwealth government and the Polesotechnic League have both become corrupt and incompetent to fill the roles for which they were created so long ago.  While the government has increased its power at the expense of individual citizens, many League businesses based in the solar system have essentially become an arm of the Commonwealth government--in fact, they now largely control the Earth government.  In response, many League businesses based in extrasolar space sought to build up a powerful government on Babur that could check the Earth government.  Founded to protect individual liberty and the free market against government interference, the League has fractured and its most powerful members have become the very thing they ostensibly exist to oppose, imperialistic and oppressive governments.  The Mirkheim crisis is a symptom, not a cause, of this galaxy-wide corruption, and while the independent businesses and independent planets lead by van Rijn and Falkayn have ended the Mirkheim war, they haven't stopped the decline of interstellar civilization.  Again and again the characters we are meant to sympathize with lament that the happy days of freedom and dynamic economic growth are ending, and a period of stagnation and intrusive government beginning.  (Anderson depicts this period of decadence and interstellar conflict in his Dominic Flandry stories, one of which we read last year.)

A superior specimen of what Poul Anderson's science fiction (in my opinion, at least) is all about, Mirkheim gets a big thumbs up from me.  I look forward to reading more of the prolific Anderson's many Technic History stories.
Posted by MPorcius at 8:57 PM