Trader to the Stars by Poul Anderson 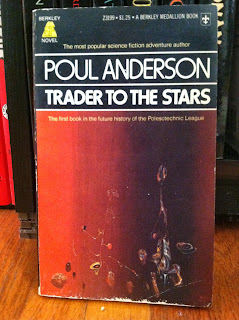 Poul Anderson is one of the famous “deans” or “grand masters” of science fiction, having had a long glorious career, written dozens of books and won millions of fans.  My attitude towards Anderson’s work has always been mixed; I almost always like his plots and his point of view, but his style is never better than average, and his later work can feel terribly bloated.  In September in an Ames, Iowa used bookstore I picked up the 1976 Berkley paperback of Anderson’s Trader to the Stars (Z3199) which has a red Powers cover and blurbs declaring Anderson to be the most popular SF author.

(I sometimes wonder about these Powers covers: why would marketing people think such an abstract piece would sell more copies than a realistic depiction of Nicholas Van Rijn, or of a space ship, or bizarre aliens, or men and/or women tensely gripping blasters?  Powers himself could paint and draw attractive and realistic people and space ships, as he did in profusion for Heinlein’s lamentable Number of the Beast – why not instruct him to? Maybe the abstract Powers covers were an effort to appeal to a more sophisticated audience?  Maybe the publisher knew the book would sell based on Anderson’s name, and used the abstract cover to save people embarrassment at the checkout counter or on the subway?  I know when I was on the New York subway I would wave a volume of Proust around like a banner, but bend and crush a Mickey Spillane collection all out of shape to make sure the cover was invisible.)

The bulk of the book consists of three stories featuring Nicholas Van Rijn, interstellar merchant during a period of history in which human beings are expanding their reach throughout the universe, meeting and trading with dozens of intelligent alien races.  There are also brief philosophical/historical passages that present a sort of background for the stories' libertarian capitalist setting.

I have to admit I expected Nicholas Van Rijn to be a slender or muscular hero type, either hard-bitten and blunt or sophisticated and flippant.  So I was surprised to discover he was an obese (we are told he has numerous chins) gourmand and lecher who splutters and complains at his employees like a sitcom boss.  This was an interesting surprise, though I did find Van Rijn's accent and speech patterns more irritating than amusing.

“Hiding Place,” the first story in Trader to the Stars, has detective story elements, and a charming gimmick: the human crew of Van Rijn’s vessel have a brief period of time to figure out which group of alien creatures on a zoo ship are the intelligent beings who have the information they need to escape death at the hands of space pirates.  This is a particular challenge because the intelligent aliens have mistaken the protagonists for the murderous pirates, and are trying to hide every indication of their intelligence.  This is a fun and appealing story.  The intelligent alien race turns out to be quite reminiscent of the aliens described by Burroughs in Chessmen of Mars, written in 1921, making me wonder if Anderson had read that work.

I found the other two stories in Trader to the Stars, “Territory” and “Master Key,” less appealing and less memorable.  In both of them Anderson painstakingly develops preindustrial alien societies with complex social relationships, but the details about these societies faded from my mind as soon as I finished reading the story.

In “Territory,” Van Rijn is center stage, marooned on an alien planet when the spear-wielding natives rise up and drive off all the humans save him and a beautiful female do-gooder.  Van Rijn figures out the natives’ culture and society, gains their respect by defeating their champion in hand to hand combat, and then negotiates a business deal which will benefit himself and the natives, making Anderson’s point that private business and the profit motive are a better way to solve problems and order life than government and charity.  “The Master Key” has two first person narrators, a man who is visiting Van Rijn in his luxurious apartment and a Van Rijn employee who relates the main story, which is about his difficult experiences trying to establish trade with the natives on a newly discovered planet.  So sagacious is Van Rijn that he is able to figure out what makes the alien society tick just from his employee’s description.  Then Van Rijn passionately laments that most people do not truly desire freedom and independence, but prefer to be told what to do, provided for, and protected from others and from themselves.

Trader to the Stars is a readable, enjoyable, but average SF book, distinctive only because of its libertarian sensibilities, which will endear it to some but irritate others, and because its hero is fat (though being fat doesn't stop him from outfighting other men and getting the girl.)
Posted by MPorcius at 2:08 PM