In his introduction to The Best of Jack Vance, important SF critic Barry Malzberg praised James Schmitz, saying he was “the greatest portrayer of total alienness in science-fiction.”  I could not recall hearing of Schmitz before, and Wikipedia was full of praise from Gardner Dozois for Schmitz’s prominent female protagonists and well-developed , psychologically complex characters.  Sounded good, so I hunted down Schmitz’s Hugo-award-nominated story “Lion Loose.”  I read the Baen Books e-text (a free sample chapter from Trigger & Friends), because it popped up first during my search, but the Gutenberg version, which reproduces the Schoenherr illustrations from the story’s 1961 appearance in Analog, may be preferable to some. 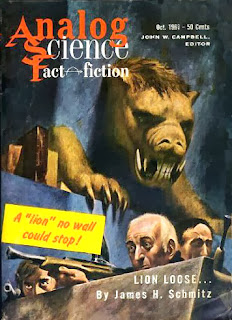 Broad-shouldered muscleman Quillan, some kind of interstellar G-man in disguise as a space pirate, is staying at the Seven Star Hotel, a space station hanging out in the middle of interstellar space that serves as a trade depot and luxury hotel, when he is approached by Reetal Destone, a sexy blonde he has worked with in the past.  She is a private detective/industrial spy, and, like Quillan, she is armed to the teeth with ray guns and espionage equipment.  Reetal informs Quillan that the manager of the hotel and the head of hotel security are in cahoots with the Brotherhood, a sort of space mafia, and, after making some kind of transfer of illegal goods, they are going to blow up the hotel and the thousands of people in it!  Unbeknownst to the hotel guests, the corrupt half of the security force has already murdered the honest half, taken over the control room of the space station, and planted the bomb nobody knows where.  Quillan, Reetal, and a handful of armed guests and hotel staff have just six and a half hours to retake the station from 70 ruthless criminals before the ship with the illegal cargo arrives.


Quillan easily infiltrates the criminals’ group, and, thanks to his fame in the underworld (the murderers and thieves know him by his nickname, “Bad News”) and his fast talking ability, is soon made one of the leaders of the criminal enterprise.  The head criminals reveal that the illegal cargo is fifty ogre-sized carnivorous monsters that have the ability to pass through solid matter.  The crooks had a sample monster on the station already, but it has escaped and it is now free within the hotel.  Quillan is given the job of recapturing the creature.

The style, characters and tone of "Loose Lion" are bland and pedestrian.  The plot, as Quillan hunts the dangerous monster and sows dissension between the two groups of criminals, isn’t bad, but it isn’t stellar.  Action fans may complain that almost all the fighting takes place “off screen,” and that the resolution of the monster portion of the plot is anti-climactic.  Most of the story consists of conversations.
So, a middling pulpy story about space pirates, alien monsters and ray guns.  I have to admit that it did not live up to Malzberg and Dozois’s praise. It wasn’t particularly “alien”; in fact the characters sling tired 20th century clichés like “out of my cotton-pickin’ mind” and “it was big as a barn door!”  The woman protagonist gets captured and tortured by one man and then rescued by another.  And I thought the characters pretty cardboard.  Presumably Malzberg and Dozois had other Schmitz stories in mind; hopefully as I read a few more Schmitz tales I will encounter one of them.
Posted by MPorcius at 1:23 AM