The Other Side of Nowhere by Murray Leinster

Recently I had a brief twitter exchange with other SF fans about Murray Leinster in which it was suggested that Leinster’s work is pleasant but forgettable.  I had an unread Leinster, The Other Side of Nowhere (Berkley 1964, F918), on my shelf, so I dug it out and over the last two days have read and enjoyed its 142 pages. 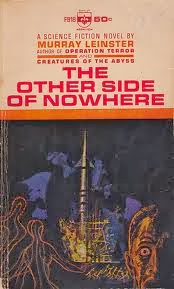 Interestingly, Leinster in this novel portrays interstellar travel in the far future as a dreadful experience.  Space ship crew members are crude brutes who never ship out on the same vessel twice because they routinely grow to hate each other over the course of a single voyage.  It is against the law to bring weapons on a space ship, but most crew members and officers carry a blaster or a knife to defend themselves from each other.  Leinster repeatedly describes conditions in a space ship as being like a prison, and the design of a space ship as not streamlined, but bulbous and ungraceful.  During an interstellar voyage the officers and crew have little to do because the ship basically flies itself, and spacemen do not love a space ship the way sailors traditionally love their boats and ships, perhaps Leinster’s commentary on the psychological cost of our automated, mechanized society.

The ship on which the story takes place is the largest ever built, and is on a dangerous mission, carrying the heaviest cargo in galactic history and planning to land on an uncivilized planet not via the usual foolproof force field, but on old-fashioned rockets.  The captain is grossly obese, and the crew, five thugs, tries to beat up the main character, who is signing up to be the ship’s second in command, on the second page of the book.  Luckily the main character is better at fighting than the crew, because he is from a high-gravity planet.  Just hours after he signs on somebody burgles his blaster from his quarters, so he starts a brawl and outfights all the crew members (the second time in one day!) and steals all their blasters.
The ship has passengers, who are also trouble: the passengers on a space ship are supposed to remain in their quarters the entire voyage, but these passengers consist of movie stars and a film crew who want the run of the ship to do shooting in its corridors.
This bizarre and cynical milieu, in which mutiny is the norm and everybody hates each other and is ready to argue or fist fight on any pretext, only gets more crazy as the book proceeds.  The various people on the doomed ship all have their own agendas, and take irresponsible risks to further them, leading to tense struggles in which the officers, crew and passengers pit their wits and ray guns against each other.

Leinster’s plot and characters are not complicated, but they are engaging, as is the book’s hard-boiled tone.  Where Leinster lets the reader down is in his writing style.  The sentences are often clumsy, and I kept rewriting them in my head, like when I am copy-editing a student’s paper, which was distracting.  Still, The Other Side of Nowhere was a fun read; the best Murray Leinster I have read.
Posted by MPorcius at 5:32 PM