A few days ago I read Robert Heinlein’s Red Planet in the 1990 printing that declares on its cover, “FIRST TIME IN PRINT!  The entire, uncut novel.” 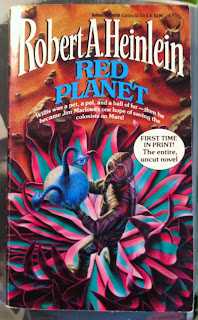 Much of Heinlein’s earlier work is, to me, close to the platonic ideal of good traditional science fiction: space ships, space aliens, space colonies, at least a little danger and violence, and some kind of thought provoking comment on life and society, written in a comfortable and engaging style.  Everything in moderation: there’s science, but you don’t feel like you are reading a technical manual; there’s adventure, but it’s not page after page of blood, gore and ludicrous cliffhangers; there’s a point of view about politics and government, but you aren’t reading a manifesto; there are characters with personalities, but you aren’t grappling with someone’s inner life like in Proust or Nabokov.  Heinlein’s early work thus has a broad appeal, and deserves its wide readership and high reputation, and Red Planet is a decent example of these works.

Red Planet is good and I enjoyed it, but I’ve read a lot of early Heinlein in the last few years, so seeing so many elements in Red Planet that are to be found in other Heinlein books did “take me out” of the novel a bit.  These include the alien pet who unexpectedly turns out to be female and a sort of messiah or monarch, the parallels to the American Revolution, and the enlightened peaceful natives who secretly have a higher level of technology than the human colonizers.  This is just a minor criticism, probably not applicable to most readers.

The cover blurb promising the first ever complete text makes one wonder what was changed by the publisher for the original 1949 publication.  Wikipedia suggests Heinlein’s advocacy of the right to bear arms was toned down, and that the ending was made a little less bittersweet.  Maybe these were good business decisions, but I suspect they weakened the novel as a piece of art.  I wonder if the publisher tinkered at all with the scenes regarding how eager the main character is to shoot one of the book’s villains, and the episode in which he does shoot down an unnamed agent of the villains, and is not sure if this person has survived being shot.
Posted by MPorcius at 3:57 PM