Besides The Other Side of Nowhere, which I finished today, I have read three Leinster novels.  All are worth reading for fun or to learn about SF history, though none are without flaws and none made a lasting impression on me. 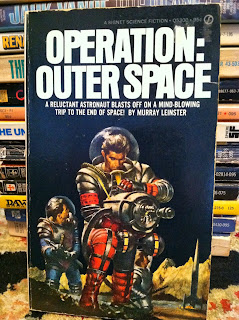 I read Operation: Outer Space in early 2012, and posted the Amazon review below on February 2 of that year. I obviously enjoyed reading the book, but today I can’t remember anything about it.

Operation: Outer Space is a fun sf novel, published in 1954. Through a strange concatenation of events, a TV producer comes to organize man's first trip to another planet. Leinster, with admirable economy, creates an interesting future Earth, likable characters, and sends them on an interesting journey, from Earth, to a space station, to a small moon colony, and then out of the solar system. There is quite a bit of material about TV programming, psychology, and biology that may be outdated, but this does not detract from the book's charm.

I read Signet Q5300, with the very cool astronauts on the cover.

I read an e-book version of Murray Leinster's The Forgotten Planet, appearing in Planets of Adventure, edited by Eric Flint and Guy Gordon. I believe it is the same text as the 1954 edition published by Gnome Press, but I can't vouch for that.

Looking around the internet for a few minutes leads me to believe that Forgotten Planet is a beloved classic that generally receives glowing reviews, but I am going to have to play dissenter here. The style is acceptable, the plot not bad, but the book is two or three times longer than necessary, and gets very repetitive. Most of the book consists of the protagonist, an illiterate savage, fighting against or fleeing from giant arthropods. There must be 30 or 40 fights with ants, spiders, mantises, crayfish, wasps, etc. An even dozen would have been sufficient. Leinster breaks up the narrative a bit by relating some biological facts about insects and doing some theorizing about the psychology and sociology of primitive people and their rise to civilization.

I read the free Gutenberg version of Leinster's 1953 novel Space Tug, I think over three years ago. This was the book I had in mind when I tweeted that Leinster was “pleasant but forgettable,” and I don’t recall much about it.  A search through my archives has not turned up any notes, so I don’t have much to say. I believe there are Cold War elements, with the Soviet Union trying to blockade or destroy the world’s first space station, and that one of the heroes of the novel is a Native American astronaut (called "Chief" by his friends, as you might expect), so SF scholars interested in Cold War issues and race/ethnicity issues might want to peruse it.