Dissenting Reviews: Rogue Moon, Hyperion, Out of the Silent Planet

Algis Budrys, Dan Simmons, and C. S. Lewis are three highly intelligent and well-educated men who have won critical acclaim and penned volumes that are widely considered classics.  But in late 2007 I didn’t let that stop me from announcing to the world via Amazon.com that I thought their books were crummy. 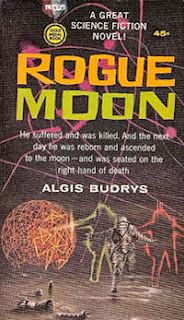 This book has a very high reputation, so I was surprised by how weak it was. Maybe the original story upon which it is based is better.

The SF premises at the core of Rogue Moon are compelling: teleportation, the duplication of human beings, and the exploration of a structure on the moon that is so alien that the human mind can only dimly comprehend it and human photography can only capture the most vague image of it. However, these issues take up rather little of the book's 176 pages; the actual exploration of the deadly alien structure takes up less than 10 pages. Mostly, Rogue Moon consists of long soap opera conversations between passionate, driven men and women who are trying to psychologically manipulate each other. Budrys isn't writing an adventure story here, but using the SF elements to explore what a "man" is, in the physical sense (if a computer scans your body and makes a duplicate perfectly identical down to the last molecule, is it as much a man as you, the original, are?) and the macho sense (one of the characters is a daredevil who takes insane risks in order to prove to himself and others that he is a "man.")

Unfortunately, the characters and their dialog are all way over the top; every character is insane or on the very edge of sanity, prone to making a long histrionic speech or punching a wall or bursting into tears at any moment. The characters and their relationships thus ring false, and, because every conversation is supposed to be tense (even buying gasoline in this novel is a psychological battle between gas station attendant and motorist) the novel has only one tone and the reader feels none of the tension Budrys was trying to convey.

I read the 1960 Gold Medal paperback. If you like the idea of an alien death trap that must be explored I recommend Robert Silverberg's Man in the Maze. 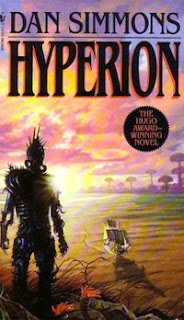 Dan Simmons and his Hugo-winning "Hyperion" in particular are very highly thought of, so I guess I will be providing a minority viewpoint here. I found the writing to be extravagant, histrionic and melodramatic, with the sex and fights like those in a run of the mill thriller or a Schwarzenegger movie. I also didn't particularly appreciate the by now cliched anti-imperialist/anti-globalist themes of the novel nor the banal government conspiracy plot line, though I know that sort of thing is very popular.

The element that alot of people (I suspect) love about "Hyperion," the pervasive literary and cultural references, are way way overdone and way too "in your face" for my taste. It seems like there is a reference to Keats or Virgil or Jack Vance or some other luminary on every page, and entire chapters are pastiches of (chapter 5 is an unsubtle tribute to (or imitation of) hardboiled mysteries) or homages to (chapter 6 includes a scene identical to the famous sword fight in "Romeo and Juliet") earlier works. I cringed when the characters started singing "We're off to see the wizard, the wonderful wizard of Oz!" in the very final scene.

SF fans should probably read "Hyperion" because it is important, and because it is widely revered, but I cannot count myself among the reverent ones.

This is the first C.S.Lewis I've read, and I have to say it is a bit of a disappointment. I didn't know what to expect, but I didn't expect what I got, a rather typical and traditional SF story about a guy who unexpectedly goes on a trip through space to another planet, where he meets some wise aliens. (Their wisdom consists of a sort of Christian Stoicism, an eager submission to the will of God, which is contrasted with the overweening ambition of humanity.) Lewis's writing is a little flat, and while he seems to be trying to inspire wonder in the reader at the beauty of his alien planet, he just as often inspired boredom in this reader. I have to admit, I prefer stories in which the alien planet is the scene of heroic battles or grim terror, as in Edgar Rice Burroughs's Mars books or Jack Williamson's The Legion of Space; Lewis is aiming higher than they did, but whereas they hit their targets squarely, he misses his mark.

I read the 2003 Scribners trade paperback, which is a disaster. Many paragraphs appear to be lacking their proper indentation, and it looks like in the process of Americanizing the punctuation many apostrophes were turned into quotation marks. Whoever managed the preparation of the text should be ashamed.
Posted by MPorcius at 11:40 PM