The Birthgrave by Tanith Lee 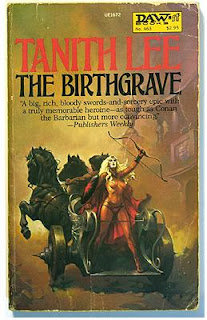 Over the years I have read several stories by Tanith Lee, enjoying some and not enjoying others.  Lee is a competent writer, and she is ambitious, generally trying to do something new and different, or at least odd, which is commendable and makes even those of her stories which I didn’t like memorable.

I read Lee’s breakout novel The Birthgrave in May of 2010 and wrote the Amazon review pasted below on May 27 of that year.  This is one of my more “popular” reviews; as of today 5 of 5 votes are “helpful,” a vote even Saddam Hussein might envy.

Tanith Lee's first adult novel, the Birthgrave, is quite well-written, but feels very long, like a trilogy of shorter novels. In a lot of ways it reminded me of some of Gene Wolfe's novels; it is the tale of a first person narrator of dubious morality and identity who has great power but doesn't really know what is going on, and its tone is mysterious, ambiguous, and sad. A lot of typical fantasy adventure stuff goes on, like bandits attacking merchant caravans, a chariot race, walled cities and castles besieged, priests, lords, wizards and barbarians waging war and engaging in court intrigues, but Lee's protagonist is a woman, and Lee addresses a lot of topics related to women's relationships with men, with each other, and women's larger role in society. These political and social observations are woven seamlessly in the narrative, and Lee is never dogmatic and her characters are never single-faceted archetypes, so you don't feel like you are reading a feminist screed or a grad student lecture, but rather a nuanced piece of literature. There are strong sexual themes in the Birthgrave, and they are all odd and/or disturbing, ranging from unrequited desire and a mother's hostility to her own unborn child to bestiality and incest.

The Birthgrave is a successful and intriguing fantasy/SF novel, but it is no fable of good vs evil or picaresque romp; readers are more likely to describe it as challenging than fun.

I read the 1975 DAW paperback, UE1776, with a cover by Ken Kelly (narrator as archer on a chariot) and an interior illustration by George Barr (topless man and woman entwined with a huge snake.) This edition has the two page intro by Marion Zimmer Bradley that I am told earlier editions advertised but lacked. Bradley informs us that she read the Birthgrave's 185,000 words in less than five hours; feel free to post your own speed records here at Amazon.
Posted by MPorcius at 8:19 PM