Two former friends meet as if by chance, and the dominant, taller, friend, Jeanie, convinces the subordinate friend, the narrator, to accompany her to her parent’s old house.  After a long train ride out of the city into the suburbs, they walk through a quiet, almost deserted town at night, to a house which is under construction, where Jeanie ritualistically murders the narrator.  Much of the story’s 16 pages are taken up by flashbacks, such as to when the narrator broke off her friendship with Jeanie some years ago, and by Jeanie’s philosophical musings about insanity – could it be that insane people have had parts of their minds co-opted by invisible predatory or parasitic machines, machines that consist of cobbled together fragments of the minds of their many victims?  I think there is the suggestion that Jeanie has shifted her consciousness to the narrator’s body while the narrator slept on the train, and imprisoned the narrator’s mind in her own body, and that she has been switching from one body to the next for a long time, but maybe I am mistaken. 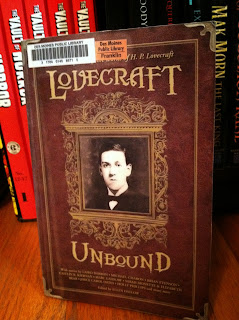 The story is readable and thought-provoking, and a few things resonated with me on a personal level – for example, I was reminded of how much I enjoyed riding trains when I lived in New York, how relaxing it was to lean my head on the window of the Metro North commuter train and drift off to sleep. The idea of unexpectedly renewing a relationship with an old friend is also compelling.  However, I don’t think the story is as well-crafted as “Violence, Child of Trust;” Cisco has included lots of poetical descriptions of things (trees, the sky, light and shadow, etc.) that don’t necessarily add to the story, and I am not sure the talk of predatory machines causing insanity is integrated with whatever it is that Jeanie does to the narrator.  Maybe we can read the narrator's first person tale, even though she is dead, because Jeanie is one of those machines and has preserved part of the narrator's mind?

Still, while not a great story, “Machines of Concrete Light and Dark,” is a worthwhile read.  I read it in the 2009 anthology Lovecraft Unbound, edited by Ellen Datlow.
Posted by MPorcius at 12:14 PM