"World Without Children" by Damon Knight 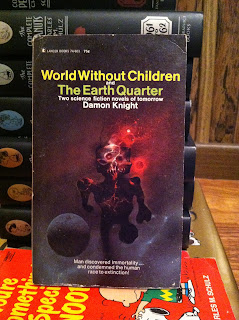 Today I read the 1970 version of “World Without Children,” a 65 page story by Damon Knight.  I’m not crazy about Knight’s fiction, and I bought the anthology it is in (Lancer 74-601) largely because I loved the cover, which I thought at the time was by Richard Powers. Like everybody, I like Richard Powers’ work, but I often find it flat and cold, lacking in depth and in emotion.  But this cover, I thought, overcame those criticisms: the sphere and the bizarre figure both have a three-dimensionality to them, and the figure and colors used provoke strong emotions of fear and dread, mystery and unease.  A few minutes research online today suggests that nobody knows who painted this masterpiece, but whether this cover is by Powers or not, I love it.

As for the story “World Without Children”, it is mediocre.  In the middle of the 20th century, some 300 years ago, man achieved immortality, but to control population pressures having children is now forbidden – taking birth control pills is mandated for both sexes by the world government.  But a scientist has just discovered that the human race is going totally sterile – if the human race is to avoid extinction, the small percentage of people still fertile must start breeding, and fast!  The world government will not allow this, as it is believed that any population growth will lead to such upheavals as wars, famines, and revolutions, so the scientists must participate in spy fiction shenanigans, like fleeing from the police, using coded messages, having secret meetings in restaurants and safe houses, etc.

All this is kind of boring, but even worse is the ending, when it is revealed that women have been secretly having babies, millions of them, so the whole sterility/extinction issue is moot, and when a minor character off screen convinces the world government to stop chasing the scientists.  Ugh.

Not only is the story a nonsensical drag, but sensitive types will likely find the joke on page 49 to be homophobic and the ending speech to be sexist.
The most interesting thing in the story is the idea that Pablo Picasso and Greta Garbo are still alive after 300 years and still producing work – what kind of art would a talented person with 300 years of experience come up with?  Knight, pessimistically, suggests that an artist who was in his or her fourth century would create work that was stale and tired.  Bummer!
Posted by MPorcius at 9:03 PM