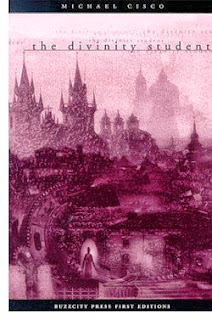 Some years ago, back in New York, I read Michael Cisco’s award-winning The Divinity Student.  I had mixed feelings about the book; I liked elements of it, but wished I liked it more.  The book’s partisans describe it as “hallucinatory,” and for me The Divinity Student was just too surreal, too difficult to figure out.  A Gene Wolfe story will often puzzle me, but I will enjoy working at the puzzle; The Divinity Student was a puzzle that was too hard, and frustrated me.  I finished it and grudgingly admired it, but felt like I had missed out, that it had defeated me.

In 2010 or 2011 I read “Violence, Child of Trust,” a 9 page story by Cisco, and had a much better experience.  Today I reread “Violence, Child of Trust,” which is available in editor S. T. Joshi’s volume Black Wings.  The Des Moines Public Library has copy of Black Wings, and that is where I read “Violence” the first time, but today I found that their copy has been checked out, so I had to talk to a librarian at Drake University Library and gain access to the copy in their Special Collections.

(As a side note, Joshi, an expert on H. L. Mencken as well as H. P. Lovecraft and an atheist activist, seems to have a very interesting career.)

“Violence, Child of Trust” is a brilliant horror story, written in the voices of three freakish brothers living in the backwoods who are doomed to worship alien extradimensional monsters.  The story is as much about family relationships as it is about three creeps who kidnap and enslave girls and then sacrifice them to alien gods, and in return are granted visions of “palaces.”  The three brothers must work together to appease the monstrous alien gods (if the gods are not appeased the brothers will be destroyed, or worse) but the brothers all seem to hate each other and suffer severe cases of sibling rivalry.

The story is full of minor details which give the reader a glimpse into the horrific world Cisco has created to serve as background to the tale; for example, one of the brothers in his youth was mentally and perhaps physically warped by the alien gods, and one of the favorite slave girls is forced to memorize alien texts and conjugate in the alien language on command.  References to racism and that the brothers are doing what their father taught them perhaps indicate that the tale is also meant to be a bleak satire of our racist, sexist, patriarchal society and its religion.

“Violence” is short but dense - every sentence adds to the story, and rewards careful reading and rereading.  Even the title has thrilling multiple meanings.  Cisco is to be applauded for writing “Violence, Child of Trust,” and Joshi for putting together the volume in which it appears.  Highly recommended.
Posted by MPorcius at 12:53 PM