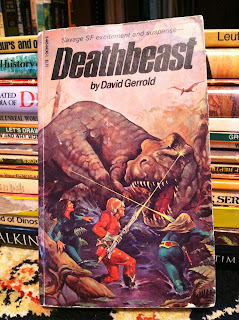 I loved dinosaurs as a kid, and I still love dinosaurs.  One time when we lived in New York I dragged my wife to a museum in New England specifically for the purpose of seeing old Charles Knight paintings and sculptures.  And I have enjoyed three or four of David Gerrold’s novels, in particular Yesterday’s Children (which I thought strongly reminiscent of an A. E. Van Vogt story) and A Matter for Men (which reminded me of Heinlein.)  So, when I saw a copy of Deathbeast on the shelf at a Missouri used book store, I did not hesitate to snap it up.

Gerrold does not waste time with a lot of preliminaries back in modern times; the book starts in the Cretaceous, with a flash and the appearance of the eight time-travelling hunters.  A minute later comes a dinosaur attack, and the hunters are blasting away with their energy weapons.  Gerrold also dismisses any concerns about time paradoxes or changing the past; whereas the hunters in Bradbury’s famous “Sound of Thunder” must keep to an elevated path and only shoot a dinosaur which would have died that day anyway, the hunters in Deathbeast trample the landscape, leaving a trail of dead animals and high-tech refuse behind them.

The plot is what you might expect: led by an obsessive macho man with some prostheses and a name (“Ethab”) that sounds suspiciously like “Ahab,” the eight hunters recklessly pursue a tyrannosaurus rex, suffering periodic losses to the canny beast and squabbling among themselves.  Gerrold tells his tale of modern human vs prehistoric beast with enthusiasm, describing in detail the hunters’ various scanners, ray guns, and other devices, and marshalling a blizzard of adjectives and metaphors to convey the might and fury of the terrifying monster.  (The tyrannosaur is “the furious god of dinosaurs” who “moved like cannon fire…like something evil and possessed…” on page 48; on page 179 the “stench of his breath was fire laced with graveyards.”  On page 186 the dinosaur “came on toward Megan like doom engraved in acid.”) Over the top, but fun and at times funny.  I do wish Gerrold had refrained from committing some of his more groan-inducing jokes to paper, such as page 66’s “Somewhere, something large was saying a lot of very bad words in dinosaur.”  He uses this dinosaur-language joke several times. 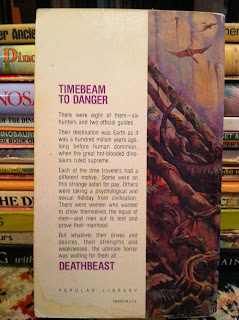 Gerrold informs us in a foreword that he has based the behavior of the dinosaurs in Deathbeast on a book by Adrian Desmond, The Hot-Blooded Dinosaurs, and an episode of Nova, the PBS documentary series.  Still, he commits some blunders that could have been avoided; for example, asserting that feathers had not yet evolved in the Cretaceous.  I’ll blame the editor for the fact that one hundred pages after telling us that grass has not yet evolved the text has a character throw her knife down into the grass.
Deathbeast is not a serious book, you don’t really identify with or feel for the characters, and it certainly doesn’t show the polish and literary ambition of the other Gerrold books I have read, but it is a wild pulpy adventure story and I enjoyed it.
Posted by MPorcius at 8:55 AM