“For All the Poor Folks at Picketwire” by R. A. Lafferty 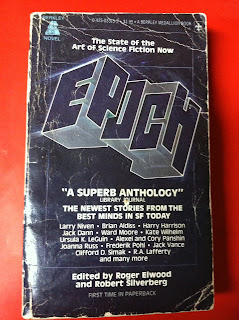 A few days ago I was very pleased to find the anthology Epoch in a Missouri flea market.  Edited by Roger Elwood and Robert Silverberg and published in 1975, Epoch, which contains 24 original stories, purports to be a sample of “the state of the art in science fiction” and “the definitive SF book of this decade.”   The front and back covers are full of such charming declarations (“the culmination of centuries of imagination”?!)

Anyway, the first story I have read in Epoch is R. A. Lafferty’s “For All the Poor Folks at Picketwire.”  This is another folksy downhome tall tale adorned with jokes that didn’t make me laugh.  I don’t really care for this sort of thing, but I try to keep an open mind and give writers a chance to grow on me.  (I always have in the back of my mind the knowledge that I was unimpressed by the first books I read by Gene Wolfe and Jack Vance, both of whom I now consider among my very favorite writers.)  This story is about a backwoods inventor, a super genius who doesn’t care about money.  All his life he has dreamed of being able to develop and manufacture items in a perfectly neutral environment, one without gravity, temperature, UV rays, etc. 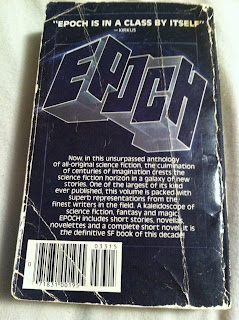 If I am interpreting the clues correctly, the inventor makes a deal with the Devil (or maybe some demon or angel) who allows him to start inventing and manufacturing in Purgatory, with a legion of kobolds and goblins as workmen – these kobolds and goblins are, in fact, the souls of the dead who are working off their sins.  The inventor’s big new invention is edible rocks and clay, which is perhaps some Christian symbolism which is escaping me.  Before the inventor got to Purgatory the kobolds and goblins were creating coal and petroleum.  The story includes allusions to Virgil and Dante; there is a Sibyl, for example, and Purgatory is accessible through caves on the Earth’s surface.

Immediately after reading “For All the Poor Folks at Picketwire,” I thought it deserved to be ranked as merely average, but the more I think about it, the more I like it.  The story is a sort of puzzle that I am still trying to figure out, which is a good sign that it was a worthwhile read.  So I’ll have to give “For All the Poor Folks at Picketwire,” a thumbs up and continue scrounging the libraries, used bookstores and flea markets of the Middle West for the stories of R. A. Lafferty.
Posted by MPorcius at 9:45 PM