The Trouble Twisters by Poul Anderson 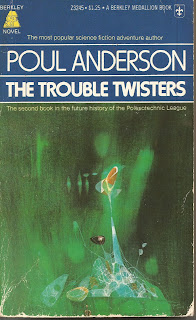 This is the second volume in Poul Anderson’s future history (at least that is what it says on the back cover of my 1976 Berkley Medallion paperback), this one containing three stories written in the 1960s that follow the adventures of David Falkayn, interstellar merchant. The first volume, Trader to the Stars, starred Nicholas Van Rijn, an established, overweight interstellar merchant late in his career.  Falkayn, in the period covered in The Trouble Twisters, is young and fit, the younger son of an aristocrat.  Having been expelled from the military academy because of a prank, Falkayn was apprenticed to a space merchant.

“The Three Cornered Wheel.”  In this first story, Falkayn is a 17 year old apprentice on a ship with a crew of four.  The ship’s power plant fails and is marooned on a planet whose native inhabitants have a sort of medieval level of technology and culture.  Luckily, an earlier human expedition left a small base on this planet, and if the base’s atomic power plant can be moved the thousand kilometers to the disabled ship, the ship can be repaired and all will be well.  Unfortunately, the natives are ruled by a class of priests who not only fear that the space merchants are a cultural threat to their theocracy, but have been preaching for centuries that the circle is sacred, so nothing round or spherical can be made.  Even the hafts of the natives’ axes and spears are octagonal instead of round.  If the space crew tries to build a wheeled wagon to move the nuclear reactor, the local peasants will massacre them.  And time is running out:  humans cannot eat the food on this planet, so if Falkayn and his comrades don’t get the ship fixed in a month or so, they will starve.

Falkayn enlists the help of a member of the native knightly caste, and, after surviving a murder attempt by the stick-in-the-mud priests, comes up with a wagon design that doesn’t use wheels; Anderson describes the geometry of this machine in detail but it went way over my head.  Meanwhile, the merchant Falkayn is apprenticed to, who is also a student of intellectual and scientific history, teaches some young native priests about Keplerian and Newtonian physics, and the Jewish Kabbalah.  These new ideas, he believes, will, over the course of time, undermine the conservative native religion and lead to new thinking and thus social, economic and political progress for the natives. 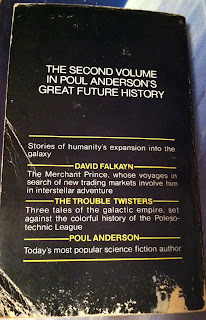 This story is pretty boring.  The characters are stock, the pacing is bad, the one action scene is uninteresting, and the long passages describing how to calculate planetary orbits, the secrets of the Kabbalah, and worst of all the complicated geometry of the wagon without wheels, are tedious or incomprehensible, and sometimes both.  Anderson also inflicts on us passages that describe in detail the landscape and fauna but add nothing to the plot or the atmosphere of the story.  I’m sympathetic to the story’s ideological content, the idea that inflexible religion can retard progress, but as entertainment or literature, the story is quite weak.  Thumbs down.

“A Sun Invisible.”  This second story is far better than the first.  Falkayn is 20 years old, his apprenticeship behind him, and he is assigned his own small space ship, and a diplomatic mission representing the merchant league.  Some aliens have built a fleet of warships and are threatening to take over a sector of space.  The technology for the warships, and advice on how to use them, is being provided by an aggressive group of aristocratic humans of German descent.  These Germans hate merchants and will drive the merchant league out of the star sector if they conquer it.  Falkayn is to negotiate with one of these Germans, try to defuse the situation and prevent a costly war.

The merchant league can put together a war fleet that can overpower these aggressors, but the alien-German alliance has a big advantage: their home system is a secret, so in any war they can use all their ships for offense.  If Falkyan can get enough clues about the invaders’ home system during the negotiations, maybe he can figure out where it is and, by taking away the alien-German alliance’s advantage, convince them to call off their invasion.

This is a decent plot, and the characters in this story (including a non-human merchant Falkayn has to work with and the German representative, a beautiful woman who has traditional aristocratic disdain for businesspeople) and the science Anderson includes are far more entertaining and understandable than the characters and science in the opening story.  The action scene, star ships chasing each other, is also better.  So, thumbs up for “A Sun Invisible.”

“The Trouble Twisters.”  This story is about 100 pages long, as long as the first two tales put together.  Falkayn is now a full Master Merchant, and working for Nicholas Van Rijn.  He travels in a small ship with a crew of two other merchants, both nonhuman, his mission to discover and make contact with new planets to trade with.  He encounters yet another alien civilization with a medieval level of technology, and is surprised to learn that these short and frail sword-wielding natives employ as mercenaries a battalion of humans, the descendents of the survivors of a ship wreck some 75 years ago.  These humans have rebelled against their native paymaster, and Falkayn has to try to do the right thing for his fellow humans while at the same time maintaining good relations with the natives, with whom he wants to begin a lucrative trade relationship.

The plot is good, the non-human characters (including the ship’s computer) are fun, and the native culture is pretty interesting, so “The Trouble Twisters” deserves a thumbs up.

I’m happy to recommend The Trouble Twisters; two of the three stories, 75% of the page count, are worthwhile. When I have the opportunity I will read the next book starring David Falkayn, Satan’s World.
Posted by MPorcius at 12:13 AM