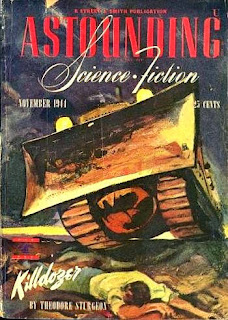 A few days ago Joachim Boaz started a conversation on his blog and on Twitter about Theodore Sturgeon, asking what people considered Sturgeon's best short work. (I advocated for “Microcosmic God” and “The Other Celia.”) A few people, including admiralironbombs, who has a wide-ranging blog on vintage genre fiction, mentioned “Killdozer!”, which was one of those stories I have heard about many times but never read.

Last night I decided to give “Killdozer!” a shot. I was able to access an Adobe PDF version of The Mammoth Book of Golden Age SF through a university library; this anthology of ten stories, first published in 1989 (I had a PDF of the 2007 printing) includes the original version of “Killdozer!” from 1944. There is a 1959 revision which is less widely anthologized and which I would have read if it was as close at hand. 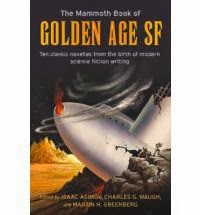 “Killdozer!” is what you would expect from the title. On a small island in the Pacific, a team of eight men, with the latest construction equipment, are building an airfield. Knocking over an ancient ruin with a bulldozer, they awaken the last survivor of an antediluvian civilization riven by war, a creature made of pure energy (“an organized electron-field possessing intelligence and mobility and a will to destroy”) which can take over machines. It takes over the bulldozer and starts killing the eight construction workers.

Sturgeon makes an effort to describe all the workers. One of the men is a racist troublemaker from Georgia, a former accountant with a “womanish walk” and a propensity for back-stabbing office politics. (In just one character Sturgeon gives us all the race, class, gender, and sexual orientation issues we could possibly need in a story about a murderous bulldozer.) One is a young Puerto Rican (the troublemaker calls him a “monkey”), another is old and has wisdom born of experience, another is the troublemaker’s simple-minded sidekick, and so on.

The more we know about the men the more we care when the creature from a pre-human age tries to massacre them. But Sturgeon also describes the operation of the bulldozer and other machines in great detail; Sturgeon apparently was very familiar with such machinery. (Sample sentence: “The clutches involved were jaw clutches, not frictions, so that he had to throttle down on an idle before he could make the castellations mesh.”) I’m not convinced all this technical detail adds to the effectiveness of the story, but all the talk of voltage, foot-pounds, compression, et al, may interest those who read science fiction for the science and engineering.

I guess you could analyze “Killdozer!” as a story about the fear man has of being at the mercy of his machines; this is strongly implied in the prologue about the origins of the electron-field creature. (The odd epilog also seems to suggest that technology, especially military technology, is nothing but trouble.)  But mostly this is a fun slasher-style story: a killer takes down the members of a group one at a time, the survivors blame each other until finally the true killer is revealed, and then the story climaxes in a desperate battle. Probably overrated, certainly not representative of what I think Sturgeon is all about, but entertaining.
Posted by MPorcius at 9:20 PM