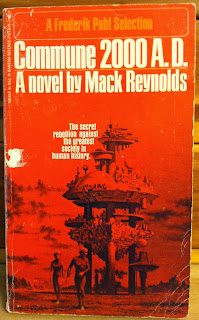 SF blogger extraordinaire Joachim Boaz tweets that today is Mack Reynolds' birthday.  In late 2011 I read Reynolds' novel Commune 2000 A.D., a Frederick Pohl selection with a very cool red cover.  My copy also has an eight page ad for the novel All Creatures Great and Small bound inside, which is much more fun than the cigarette ads you sometimes find in these old SF paperbacks.

I didn't recall very much about the book, but fortunately I had my Amazon review of December 27, 2011, pasted below, to refresh my memory:

Published in 1974, Mack Reynolds' novel, Commune 2000 A.D. depicts a North America in which 90 percent of the population is unemployed and on government assistance, and yet everyone leads a comfortable lifestyle, with plenty of food, beautiful spacious housing, efficient public transportation, and an array of electronic devices (including what we would now call cell phones and internet access.) Crime and envy are almost entirely eliminated, and there is no paper money or coins, all transactions being done through what we would call debit cards. There is no pollution and the landscape has been restored, with factories and highways underground. Computers and automation make this utopia possible. In fact, every year people take an intelligence/aptitude test, and the government computers select the best individuals for the tiny number of jobs available.

The fact that everyone has a middle class income and lifestyle without working allows them to leave the cities and band together into communes of the like-minded (for example, a commune of homosexuals, a commune of artists, a commune of people who like to get high on drugs every day, etc.) The main character, a graduate student in the social sciences, is tasked by his graduate adviser to write his thesis on the communes, and he travels from commune to commune, interviewing communards and taking notes.

There is not much plot to the book. The main character travels from commune to commune, and, because he is very skilled in bed and this is a very promiscuous society, he has sex with a beautiful woman in every commune. In the last 20 pages or so we suddenly get some plot momentum, with the conspiracy behind the communes, and the conspiracy in the government, both revealed, and the main character having to choose which one to ally with. What are the chances that he will join up with the conspiracy that has been throwing beautiful women at him?

This is a talky book, with lots of dialogue about life in the various communes and lots of anthropological and historical trivia - early in the book we read about the sexual positions favored by different civilizations, and get a lecture on the history of the mobile home in 20th century America. Later we get a recipe for cannabis brownies and a boring description of an LSD trip.

The book is also devoid of passion; most books about a socialistic future will be bashing your head in trying to convince you that our current market economy is horrible, or bashing your head in trying to convince you that the socialist economy we are headed for is horrible. In Commune 2000 A.D. there are some mild criticisms of a society in which 90% of people are on the dole, and some mild criticisms of 20th century exploitation of the environment, but neither the book's characters nor Mack Reynolds seem very exercised over anything (with the possible exception of homosexuals, both gay men and lesbians, who are portrayed in a rather unsympathetic light.)

Lacking in the plot department and the point department, Commune 2000 A.D. is a limp, tepid read. It is not offensively bad, but when you are done you wonder why the hell it was written or published.

Oh yeah, now I remember why I haven't read the other Reynolds book I own. 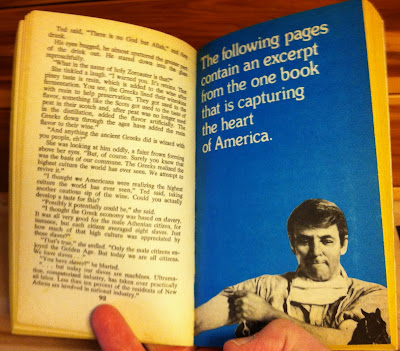