Way Out stories from the early '50s by Alfred Coppel, Dave Dreyfoos and Poul Anderson

We're going Way Out!  (That's where the fun is!)  In our last episode we read the first four stories from Belmont's 1963 anthology of early 1950s stories, Way Out, and today we finish up with the last three stories, contributed by Alfred Coppel, Dave Dreyfoos, and Grand Master Poul Anderson.

Back in late 2015 I read a short story by Coppel about which I had both good and bad things to say.  That story's tone also reminded me of the movie Gremlins. Let's see if this story reminds me of anything. 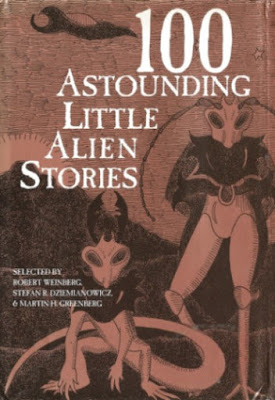 The galaxy is full of planets colonized by Earthlings centuries ago which were then lost, so that the colonists' descendants have fallen into savagery or barbarism.  When these planets are rediscovered by the space empire their inhabitants are ferried back to civilized worlds to work in factories!

Kenyon and two other men are on just such a mission, and have landed their starship on an island on a planet covered by ocean to collect the human tribe there, by force if necessary.  This island is covered with "trees" that look like giant feathers or plumes, and when Kenyon is taken back into the deepest part of this "forest" by a beautiful woman, he learns the horrible truth: the island is a kaiju-sized monster and the primitive humans live as its parasites!  After the monster devours the starship and its three-man crew, the primitives will feed off their Earthling blood by sucking at the "ground."

Like H. B. Fyfe's story in Way Out, this is an anti-imperialist or anti-colonialist story (it sounds like the Earthling space empire abandoned the colonists 400 years ago and the monster came from another world to support them), but mostly it is a pedestrian horror story.  It lacks the Fyfe story's engaging character and at-times surprising plot.  "Blood Lands" also doesn't make any sense.  There is no hunting or agriculture on the island, so the humans have to suck the blood of the giant monster to live, but what does the monster eat?  Starships don't come by every day, do they?

"Blood Lands" is one of the many stories in Way Out to first appear in Dynamic Science Fiction--in fact, the cover illustration of the December 1952 magazine depicts Elyra and the plume forest, though it makes no sense for her to have a space helmet on. "Blood Lands" is also one of the few stories in Way Out to be reprinted after 1963--Robert Weinberg, Stefan Dziemianowicz and Martin H. Greenberg selected it for 1993's 100 Astounding Little Alien Stories.

Dreyfoos's name joins Coppel's, del Rey's and Fyfe's on the cover of Dynamic's December '52 issue, but who is Dreyfoos?  It seems that he was a California lawyer and hospital administrator who wrote a score of SF stories in the 1950s after serving in the Pacific in the Second World War.  Let's sample this gentleman's work. 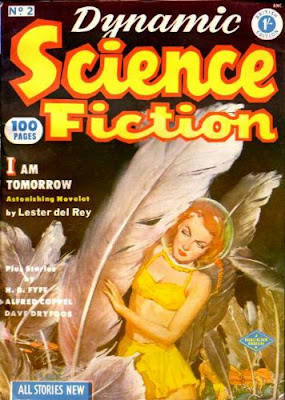 Sam and his pregnant wife Sally are sociologists left alone on Altair 3 to study and make friends with the natives.  The natives are three-foot tall people with four legs and two arms who make elaborate abstract cliff-paintings.  This bland and inoffensive 23-page story is all about how the natives don't realize the humans are intelligent beings and so ignore them, and how Sam, through his blunderings, changes their minds and even gets them to help him when an accident destroys the humans' food supply.

The intellectual core of the story is the question: how would you distinguish between social insects like ants, who work together and build things but have no intelligence or will and merely act on instinct and primitive drives, and intelligent willful beings like humans, if you were from another planet?  The humans can tell the Altairians are intelligent because they create art, and the Altairians eventually learn the humans are intelligent when Sam makes stupid mistakes.

"Honorable Enemies" first appeared in an issue of Future Science Fiction; we've already read a story from that issue, Milton Lesser's "A as in Android." 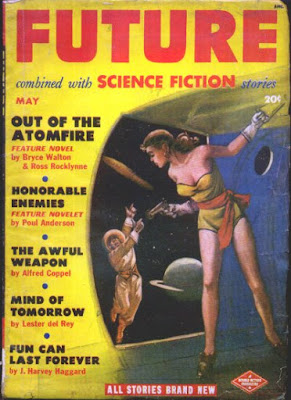 "Honorable Enemies" is one of Anderson's Dominic Flandry stories; Flandry lives in the same universe as those businesspeople with whom we are familiar, Nicholas Van Rijn and David Falkayn, but in a later time period, and he's not a merchant, but a public employee!

The Terran Empire of four million suns is old, unambitious, decadent, just trying to maintain the comfortable status quo.  The Terrans are currently in a cold war with the young and ambitious empire of the green and scaly people of Merseia, who hope to bring the entire galaxy under their rule.  Lying between these two great space empires is the small empire of the blue-skinned people of Betelgeuse; the Betelgeusians are wealthy and have a powerful space navy, and if the Merseians can win them to their side, the Merseians will feel free to turn the cold war hot and launch a direct attack on the human empire. So, the Betelgeuse system is crawling with Terran and Merseian diplomats and spies, trying to sway the locals to see things their way.

Among the Terran delegation at court are two ace intelligent agents, Flandry and a beautiful woman, Aline Chang-Lei.  Their primary foe is Aycharaych, one of the bird-people of the Chereion system (the Chereionites are members of the Merseian empire--all three of the empires in the story are multi-species polities.)  Flandry, who comes across as amoral and ruthless, tries to burgle the birdman's rooms, and then tries to murder him when no witnesses are around, but his schemes are foiled, because Aycharaych can read minds!

Things are looking bleak for the humies--the birdman is bribing and blackmailing so many people at the Betelgeuse court that it looks like the locals will ally with the Merseians any day now.  But Aline Chang-Lei figures out how to save the day for humanity--she tricks Flandry into drinking a drug that makes him believe everything he hears, then tells him of a desperate Terran plan to conquer the Betelgeuse system by force.  This is a ruse, but because Flandry believes it, when the birdman reads it in Flandry's mind the Merseians believe it, and act in such a way that it looks like they are trying to take over Betelgeuse by force.  This, of course, inspires the Betelgeuse government to side with Earth and send all the Merseians packing.

An entertaining story, with traditional SF elements like strange aliens and monsters, telepathy, various types of ray guns, violence (the courtiers go hunting flying dragons in little jets and there is also a sword fight), and a plot resolved via outsmarting people and using fancy technology.  Anderson's characters are also interesting.  The villain (as the title hints) is not only more competent but more honorable than our hero, and Chang-Lei is a sort of tragic figure--she is in love with Flandry, and when she gives him the drug she not only tricks him into believing the misinformation meant to fool the Merseians, but tricks him into thinking he is in love with her so he will act like her boyfriend for a few days, including having sex with her.

Anderson's Flandry tales have been enduringly popular, and "Honorable Enemies" has been reprinted many times, usually behind covers which emphasize the idea that Flandry is pretty handy with the ladies! 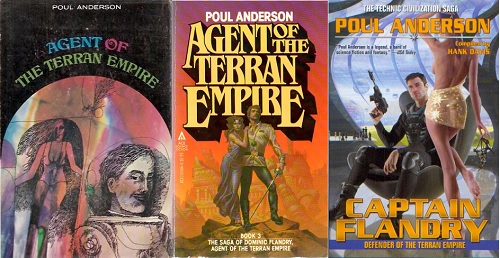 So we bid a fond farewell to Way Out.  Only one of the stories is actually "way out," the very first, Milton Lesser's "Ennui"--the rest are pretty traditional SF fare.  However, I quite enjoyed the Anderson and the Fyfe, two solid humans-at-odds-with-aliens stories, and the Bailey future detective story and the Dryfoos future-social-scientist-meeting-aliens story had their high points.  Not a bad anthology at all.  Whatever their idiosyncrasies, the Belmont people are still on my good side!
Posted by MPorcius at 11:47 AM