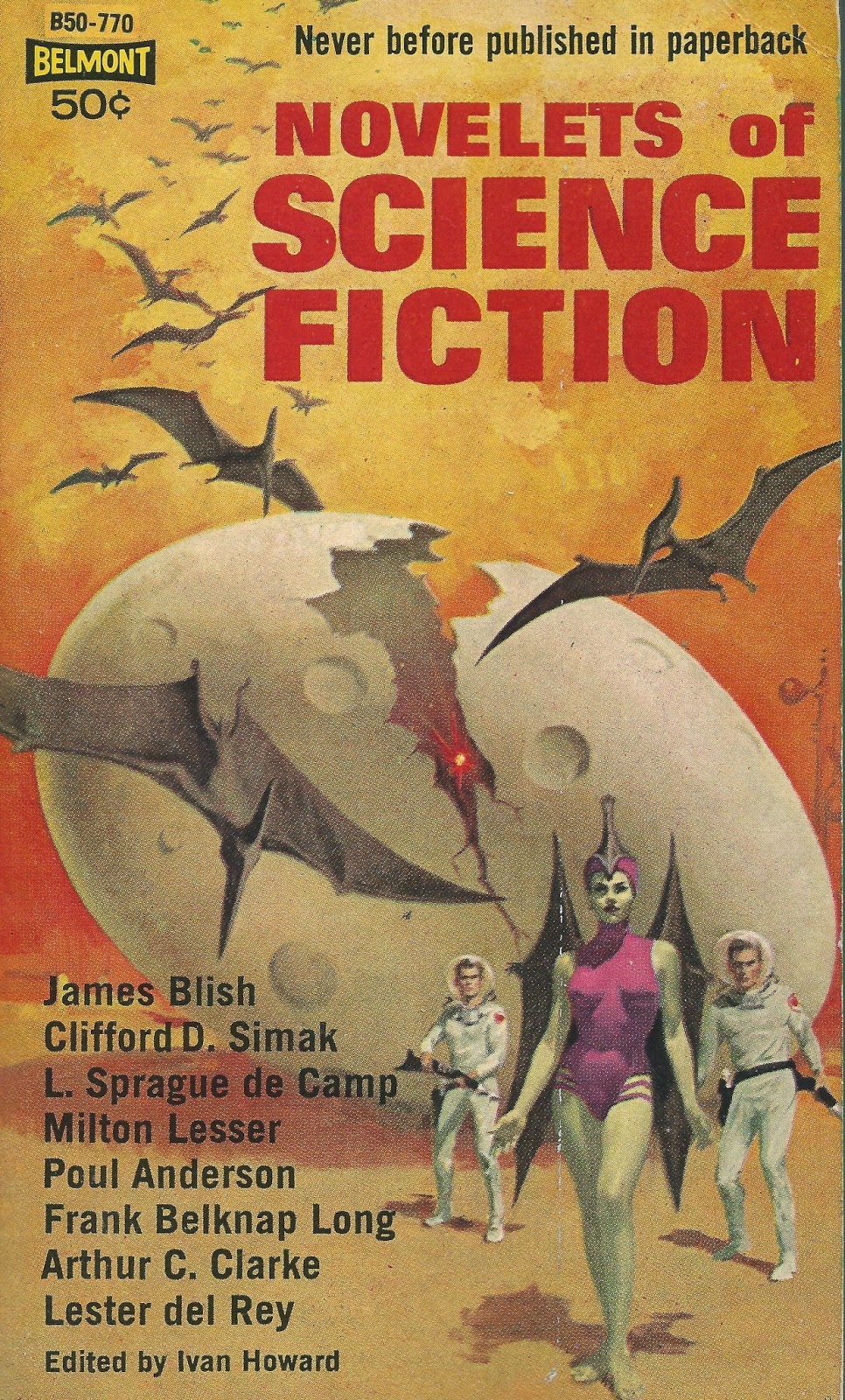 Those who follow my twitter account will already know of the new love in my life, the cover painting of the 1967 printing of Novelets of Science Fiction, edited by Ivan Howard.  Who gifted our undeserving world with this Platonic ideal of all our dreams of green winged women, heavily armed astronauts, colossal eggs which give birth to stars (?), and teeming flocks of Pteranodons?  Nobody seems to know!  Our benefactor chooses to remain anonymous!

This collection of early 1950s stories was first published in 1963.  (The fact that the stories were over a dozen years old when my edition was printed didn't stop the publisher, Belmont, from trumpeting this volume as "THE BOOK OF THE YEAR."  This is a self-confidence I can admire!)

I could go on all day about the cover of Novelets of Science Fiction, but as the careers of Brad Pitt, Tom Cruise, Marilyn Monroe and Elizabeth Taylor have shown us, it's not looks, but what's on the inside that counts!  So let's take a gander at three "superlative" 1950s SF tales by "modern masters of science fiction," L. Sprague de Camp, Poul Anderson, and Milton Lesser. 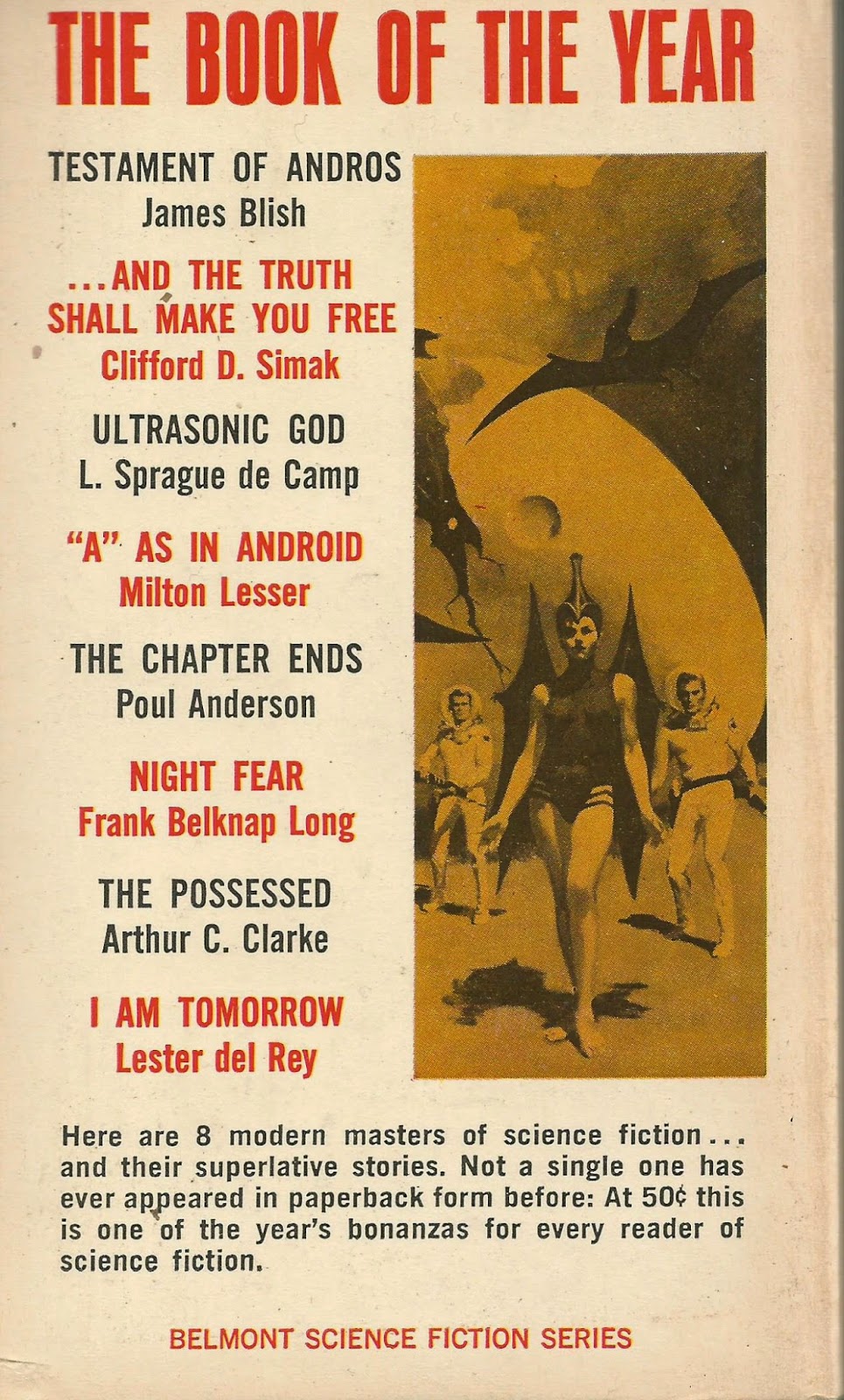 When I was living back East I read a bunch of L. Sprague de Camp stories, mostly the Viagens Interplanetarias tales about guys going on sword-swinging adventures on an alien planet.  These stories were the product of De Camp setting himself the difficult task of writing John Carter style "planetary romance" or "sword and planet" stories that were more realistic than the Burroughs archetype.  The books (most of them have a capital "Z" in the title) were not bad, but were also not memorable.

"Ultrasonic God" is set in the Viagens universe, and is a pretty straightforward adventure story.  I suspect years ago I read a different version of it with a different title.

Adrian Frome is a blonde Englishman (he says stuff like "Cheerio!" and "Righto!" and "Delighted to meet you, old thing!") and an engineer working as a surveyor for the Earth-based government on an alien planet.  He gets captured by primitive natives, and is taken to another Earthman, a Thai, whom the alien tribesmen see as a god.  This ambitious human is trying to make himself emperor of all the disparate local tribes, and to that end is training this tribe in modern military discipline and making them simple firearms.  He forces Frome to work in his little gunsmithy. He has also captured an Earthwoman, a pretty missionary, and expects to found his dynasty with her. 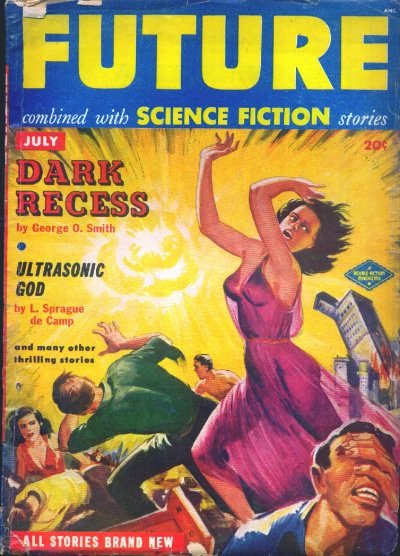 In the grand tradition of pro-science and pro-engineering SF, our hero saves the day by doing some engineering.  The would be emperor issues commands to the natives, who have dog-like hearing, by blowing notes on a Galton whistle (what I would call a dog whistle.)  Frome attaches a dog whistle to a kettle and puts the full kettle on the fire; when the water boils it blows the whistle so loud that it distracts the natives, and they cannot hear the Thai's signals.  Frome rescues the missionary from being raped by the aspiring emperor, kills the Thai in hand to hand combat with medieval weapons, and then he and the missionary escape the natives.  Frome falls in love with the missionary, proposes marriage, but then runs out on her to a different planet when he realizes she takes her kooky religion, which she talks about unceasingly, seriously and their marriage will be a celibate one.

This is an inoffensive but unimpressive story.  Maybe the numerous sly references to sex are daring by 1951 standards?  I guess one could also see the story as a kind of spoof of John Carter's career (remember, Carter became Emperor of Mars; in this story a man with such imperial ambitions is the villain, not the hero.  In "Ultrasonic God" our hero is a humble civil servant...who turns out to be an expert at fighting with machine guns, spears and swords.  So maybe not that different from John Carter after all.)  Feminists might want to study the story because most of the jokes are at the expense of women.  (Example: Frome says that Englishmen don't let their women walk all over them like the Americans do.)

I grade this one "acceptable;" presumably I will soon forget all about it.

The beautiful front and back covers of Novelets of Science Fiction both proudly claim that the eight stories it contains have not appeared in paperback before.  Yet, according to isfdb, "The Chapter Ends" appeared in an Ace Double, Adventures in the Far Future / Tales of Outer Space, the same year it appeared in an American magazine and a British magazine.  Never trust a pretty face! 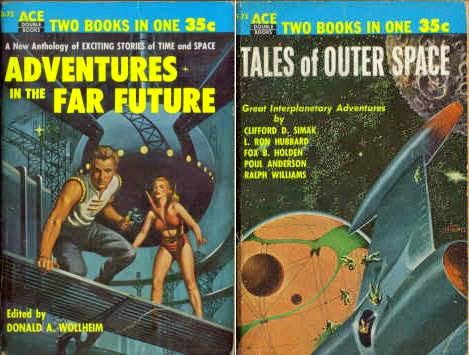 It is many thousands of years in the future.  Mankind has spread throughout the galaxy, and the human race has been genetically engineered into a multitude of different races, each suited to a particular environment.  People now normally live to be over a thousand years old, and many people can simply fly through space without a space ship by tapping into "cosmic energy" with their GMO brains!

There is another powerful race of people in the galaxy, the Hulduvians, who can also tap into the cosmic energies with their brains.  Unfortunately, human and Hulduvian brains are different, so they cannot use their brain powers in each others' vicinity.  So the two space empires sign a treaty and divide up the galaxy; the humans get the galactic center, and the Hulduvians get the rim.  All humans must evacuate the rim systems.

One such system is that of Sol and the Earth.  Fifty thousand years ago Earth was the capitol of the human space empire, but nowadays Earth is a backwater and has almost no contact with Galactic civilization.  The few people who currently reside on Earth and are of primitive stock that only live 200 years and have no mental powers.  These people are living the environmentalist dream, using only 19th century technology, growing food with their hands, eating only what their own communities produce, engaging in no international trade.  Members of the Galactic civilization have to come to tell them they have to leave, and then spend years building space ships to take them away because their puny all-natural and organic brains can't carry them off the planet.

This is a mood piece with more sentiment than plot.  We see the different ways various people from the Galactic civilization respond to seeing the Earth, home of their ancestors, and how various Earthlings react to being forced to leave their homes.  Perhaps most entertaining are Anderson's descriptions of the vast ruins of Sol City, once capitol of the human part of the galaxy.  Also worth remarking upon is Anderson's vision of the lifestyle of the Galactics-- in contrast to the tightly-knit Earth villages, which almost seem like European peasant villages of a pre-industrial period, the Galactics have abandoned community entirely, living like hermits, with no marriages, no families, and, as one disgruntled Earthling says, "No tradition...I pity you Galactics!"

This is a good story that makes you think about tradition, community, and how people respond to change.  The more I think about it, the more I like it. 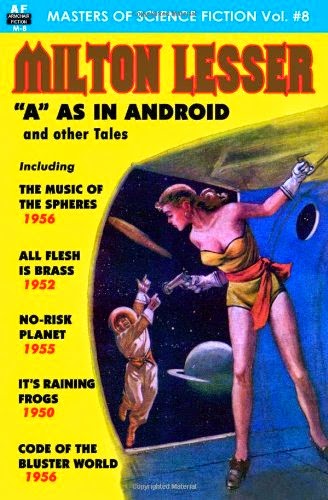 Back in January of 2012 I read Milton Lesser's fix-up novel Secret of the Black Planet and wrote a mildly negative review of it on Amazon.  I think that is my only previous exposure to Lesser.  Here I am giving him a second chance--don't believe all those people who say I'm not open-minded!

"'A' as in Android" first appeared in a magazine, and in 2013 served as title story of a collection of Lesser tales published by Armchair Fiction as one of their Masters of Science Fiction series.

"'A' as in Android" is written like one of those hard-boiled detective stories, a first person narrative from a tough guy on an investigation.  Our narrator, Carmody, works for the government's Android Service, and he just got to Hyperion, one of Saturn's moons.  A club owner on Hyperion has a squad of dancing girls so beautiful, so graceful, that they can't be human; they must be androids.  The club owner hasn't paid the android tax, and Carmody has come to Hyperion to collect.

As it turns out, the girls are not androids, but infiltrators from another dimension in disguise.  There's a fist fight, and Carmody is overpowered (the extradimensional girls are super strong and don't even need to wear a space suit when exposed to hard vacuum, as the story's illustration shows) and the girls put him in one of their machines.  This machine transfers his mind from his body to an android body; his original body is then tossed in an alley!  After some more hand to hand combat Carmody escapes and tries to warn the authorities, but since he's in an android body, no one believes him.  Poor Carmody, trapped in an android body, has to watch as more and more clubs, throughout the Solar System, employ impossibly graceful dancing girls, alone in the knowledge that this is a sign of mankind's impending slavery to aliens from another dimension!

I don't think this story holds together if you look at it too closely, so I'm not going to look at it too closely.  Instead I'll just judge it "acceptable" as a piece of fast-paced and brief entertainment and move on with my life.  The whole thing is crazy enough that I am willing to read more Lesser stories to see how crazy they are.

"THE BOOK OF THE YEAR" is probably a stretch, but so far I'm liking Novelets of Science Fiction.  I will read all the stories and crown a winner; so far Poul Anderson is in the lead.
Posted by MPorcius at 10:27 PM