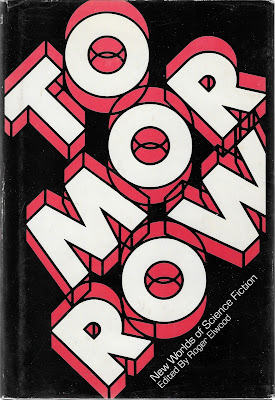 The Buckeye Bookshop of Akron, Ohio has a good-sized science fiction section, but almost all the volumes on the shelves are less than twenty years old, and books that new are of little interest to me.  I did, however, discover a hardcover from 1975 with a distinctive typefacey designy cover, an anthology of brand new stories edited by Roger Elwood entitled Tomorrow. The price neatly written in pencil on the book's first page was "$10," but the Buckeye Bookshop people were having a sale so I got away with it for five and tax.

Wikipedia indicates that my fellow son of the great state of New Jersey Roger Elwood had a strange and wide-ranging career that included working on wrestling magazines and writing copious numbers of Christian-themed novels as well as editing a mountainous pile of SF anthologies.  His career was also a controversial one--the Wikipedia page on Elwood is largely given over to describing a hostile assessment of the man's editorial career by Theresa Nielsen Hayden.  Well, here at MPorcius Fiction Log we enjoy looking into the work of unusual and controversial members of the SF community (I think A. E. van Vogt, Harlan Ellison, Barry N. Malzberg, L. Ron Hubbard and Andrew J. Offutt qualify, and perhaps Donald A. Wollheim as well), so let's investigate Tomorrow by reading all its included stories, looking for clues that Elwood perhaps really was a "careless" editor of work that was "low-grade."  Tomorrow is perhaps a good subject for such an investigation, as it appears it was never issued in paperback and most of its stories were never reprinted (not exactly a sign the volume achieved critical or popular acclaim!)

(Back in 2015 the MPorcius Fiction Log staff conducted a similar experiment when we read Elwood's anthology Future Corruption.  I've read parts of other Elwood anthologies, like Frontiers 2: The New Mind, and lots of stories by Barry Malzberg which first appeared in Elwood anthologies.  In 2011 Joachim Boaz read Elwood's Future City anthology--in the comments Joachim and I discuss at some length the included R. A. Lafferty and Malzberg stories.  Tarbandu took a crack at Future City himself in 2013.  In 2012 blogger sanski posted a defense of Elwood which I find very convincing.)

There are ten stories in Tomorrow; today we look at those contributed by Joan Hunter Holly, Alan E. Nourse, and Robert Hoskins.

Back in 2013 I read Holly's 1960 novel The Green Planet and criticized her editor and made fun of her author's bio and her publisher's line of books about celebrities and kinky sex.  Theresa Nielsen Hayden isn't the only person who can be mean to editors!  I thought The Green Planet a mediocrity, but maybe this 60-page piece will prove Holly, recipient of the Hinman superior student scholarship, was capable of better work!

In the future, the government takes four-year-olds and, using various techniques (like inflicting mild electric shocks on a little girl who reaches for her favorite doll!), conditions them to no longer feel "Affection, Hatred, and Love."  (The government believes "human beings with normal emotions could not survive the superfast pace of change and overcrowding"--maybe we can loosely characterize "Come See the Last Man Cry" as an overpopulation and/or "future shock" story.)  As a result, adults in this future society lack most emotions, almost never laughing or crying.  Because the government scientists want the populace to be aware of the way life was lived in the past, and because people are very curious about the old emotions, the main characters of this story offer thrice daily demonstrations of emotions.

You see, children of low intelligence (the main characters call them "defectives" or "morons") don't respond to the treatment offered at the "Anti-Emotion Conditioning Center," and such children are taken from their emotionless parents and put to work (unwittingly) putting on performances.  The "moronic" child lives in an apartment with a one-way mirrored wall, and at specific times of day the eggheads manipulate him so that he bursts into tears, bouts of misery which people on the other side of the wall observe with rapt attention.

The plot of the story follows one of the young scientists, Dainig, who works with a particular low-IQ boy, Peter, and finds himself feeling for the child and beginning to doubt the morality of the whole anti-emotion regime.  When a technical mishap reveals too much to Peter and he begins to suffer a likely-terminal psychological breakdown, Dainig liberates him from the lab and sneaks him around in disguise.  Under Peter's influence, Dainig begins to feel affection and love again, putting himself at risk of extreme remedial anti-emotion treatment at the hands of his colleagues!  And then there is the fact that, without Peter to provide the cold-hearted populace an emotional outlet, morale all around the world is in decline. 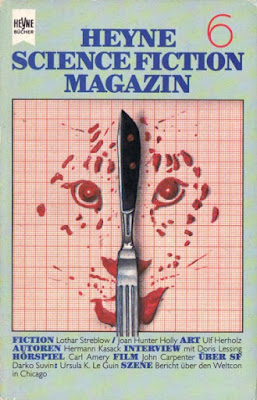 This story is perhaps a little long and slow, but I found the scenes in which the callous scientists make Peter cry (by telling him vicious lies like that his parents abandoned him because he has been a bad boy or that his parents have died) to be effective--they actually made me feel sad and angry.  Maybe I'm a sucker, and maybe we should criticize Holly for cheaply manipulating her audience by presenting us with that most pitiable of creatures, a dim-witted child in distress (just like her main characters!), but I have to give this story a passing grade because it affected me.  Also on the plus side, I wasn't quite sure how the story would end, and I think Holly is laying a little Christian allegory on us, with Peter as Jesus and Dainig as Judas, which was interesting.  Not bad.

"Come See the Last Man Cry" is one of the few stories in Tomorrow to be reprinted elsewhere; it was translated and appeared in a German magazine in 1983.  If you find yourself interested in Holly's work you should check out a Facebook page someone is maintaining in her memory--it is full of photographs and info about Holly's life.  I find it pleasing to see this level of devotion to a minor SF personage--the communications and information revolution which has taken place during my lifetime has been a boon for people with niche interests. 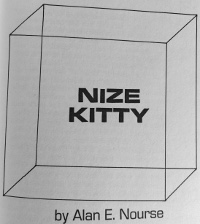 Nourse produced a respectable number of stories that appeared in such important SF magazines as Astounding, Galaxy, and F&SF, but I've never read anything by him.

As I perhaps should have guessed from the title, "Nize Kitty" is a cutesy story about cats, exploiting people's love for cats and susceptibility to all those tired jokes about how cats are individualistic and act like they own the house, etc. I would have avoided this story if I had known ahead of time what it was all about and wasn't conducting an exhaustive investigation of this volume.  (Exhaustive, I say!)

Extrapolating from mid-century trends like the radical increase in urban crime and what in my academic days we called "white flight," Nourse envisages a future in which the inner core of major cities like Philadelphia have been abandoned, everybody moving to the suburbs or clinging to an outer ring of urban space. The inner city, where the roads and buildings are collapsing due to neglect, is colloquially called "The Graveyard."

Our narrator is a Brooklyn-born cop in Philly. His superiors send him into The Graveyard on his gyro-car to investigate complaints of disturbances from the poor people who live on the fringes of the Graveyard. He is loathe to go--no cop has ventured into the those ruins for a decade! But he goes, and discovers the source of the disturbance when a cat talks to him.

In a long scene which I suppose is meant to be funny, the talking cat explains that cats are more intelligent than humans but have kept their abilities a secret for thousands of years. The noise people have been complaining of is emanating from nightly meetings of all the cats in the vicinity. The cats (who don't get along well with each other but are trying to work in concert because of the gravity of the situation) have decided that mankind has gotten too close to destroying the world via pollution, nuclear war, etc., and so they, the cats, are going to take direct control over the world. This phenomenal cat demonstrates some of its amazing powers to the narrator when the cop expresses skepticism that cats could somehow outfight humans.

The end of the story includes scenes, again I suspect meant to inspire mirth, in which the narrator's wife and superiors don't believe his story about cats plotting to take over the world.  The cop loses his job and nervously waits for the coming feline take over, obsessively going over his conversation in the Graveyard for clues as to the nature of the coming quadruped regime.

Lame.  If I put on my charitable hat, I can tell you that people who love reading stories about cats may find "Nize Kitty" to be acceptable fare, and that it is perhaps an illustrative specimen of 1970s SF, what with the way it focuses on urban decay and touches on ecological issues and fears about international conflict. (I guess as a joke, or as an indication of how chaotic the international situation has become, the country mentioned in the story as a US rival isn't Communist Russia or Red China, but Brazil!) We might also consider how this story fits into the long tradition in speculative fiction of misanthropic stories in which aliens or elves or whoever are portrayed as superior to humans. Nourse seems to have one foot in this tradition, but to also be subverting it--the cats he portrays are just as selfish and just as prone to fighting amongst themselves as humans are. The felines are perhaps, rather than a foil or role model for humans, a mirror image of our selfishness and squabbling.

"The Kelly's Eye" by Robert Hoskins

I own a few anthologies edited by Hoskins, and at least one of his novels, which I have not read. Maybe this story will inspire me to read that novel?

It is at least two centuries since some unspecified holocaust devastated the world. The people of the United States live in a state of barbarism, while parts of Canada are civilized. (Yeah, yeah, I can hear all you Democrats out there snickering "This is already the case!") A young Canadian diplomat has been sent to the ruins of Trenton, New Jersey to chase a rumor that a Canadian boy is in the custody of a nomadic tribe of bandits. His mission: trade for the boy's release or somehow rescue him.

This is an entertaining story about diplomacy; it actually reminded me of something that Poul Anderson might do. We learn about the barbarian tribe's culture (polygamy, a council of elders, a sort of wise man or witch doctor, ritual circumcision), about the Canadian culture (they have guns and aircraft and radios and so forth) and the interactions between these two groups, and then the hero resolves the problem through a clever mutually beneficial trade that reflects aspects of both societies and of the post-apocalyptic milieu. A solid piece of traditional SF. 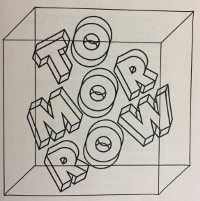 I liked the Holly and the Hoskins, and while I didn't like the Nourse, it is the kind of thing I know other people might like--it is no worse than lots of stories one would find in a SF magazine or original anthology. So far, the idea that Elwood is some kind of incompetent or shyster is not supported by the contents of Tomorrow.

More from Tomorrow in our next episode!
Posted by MPorcius at 3:33 PM