From the dawn of the disco era, bleak visions born in the mind of the sage of Teaneck!

Last week I read three old stories by Barry Malzberg; why should this week be any different? I found today's stories in anthologies edited by Robert Hoskins and published in the early 1970s.

It seems like just yesterday I was reading Robert Hoskins's Infinity Two, an anthology of all new SF stories I purchased in South Carolina while doing my holiday traveling.  Hoskins's intro to the volume starts off "Man is a waster..." and goes on to argue that mankind must have a death wish, or perhaps is possessed by some malevolent force; what else could explain the way we are polluting our world, which, to primitive man, may well have been a "paradise!"  Hoskins muses that perhaps nature created human kind by mistake, and is trying to rectify its error, and even hints that 1972 could bring the end of humanity!

"Elephants," six pages, appears under Malzberg's pen name, K. M. O'Donnell.  This is a mysterious story about a small crowd at a crummy little circus. In the crowd are three small children, a boy (10) and two girls (6 and 8).  The spectators watch the juggler, then the magician.  The juggler is announced as "the last juggler," and when he has finished he declares "The end of all juggling!" and throws his clubs into the darkness of the night.  Likewise, the magician is "the last magician" and his tricks include "the last vanishing" and "the last dancing rabbits."

Taking my cue from Hoskins, I think this story is about the last day of humanity; tomorrow the human race and/or the Earth will be destroyed, and the small crowd at the circus are those people who have decided to spend the last hours of their lives at their favorite amusement.  (The kids don't quite realize what is going on.)

"Elephants" would have another chance to bewilder the public two years later in Hoskins's anthology The Edge of Never: Classic and Contemporary tales of the Supernatural.

Between the covers of Infinity Four Malzberg goes by his own name.  Hoskins's intro this time is about changes in the publishing industry which he considers "a revolution."  Fiction, we are warned, "is in serious trouble."  Far fewer magazines publish short fiction, "one knowledgeable source in the field predicts that within twenty years there will no longer be such a thing as a hardcover bestseller..." and, of course, prices for paperbacks will continue to rise--the four dollar mass market paperback bestseller is not an impossibility!

Slick Sid is a teenage drug addict living in the grim future of the 1990s!  While astronauts are dying on Mars (astronauts in Malzberg stories rarely meet success) Sid has to deal with squares like his girl friend, who wants him to settle down with her, his parents, who want him to consider his future, and the cops, who want to learn all Sid knows about his friend Jug's "final trip" (drug-induced suicide.)  On the same day all contact is lost with the explorers on Mars, Slick Sid pens his own suicide note, this nine page story.

I actually thought this one was pretty funny; Slick Sid insists everybody (even the police investigator) call him by his full name (Slick Sid), calls the Kennedys the "Kenny cats" and says "the only tragic thing about the Kenny cats is that we got to hear about them," and in a dream about going to Mars tells a Martian that he is an expert on drugs come to the red planet to conduct research on ancient Martian hallucinatives.

If you are less of a happy-go-lucky sort than I am I guess you could interpret "The Ballad of Slick Sid" as a tragedy about the collapse of American society as evidenced by the inability of the young to see any purpose in life or relationships and the failure of the government to accomplish anything in space.  Maybe Malzberg is suggesting that we should see shooting off rockets as a foolish and destructive distraction from our society's real problems, the same way we see shooting up as an individual's stupid and risky way of avoiding his personal problems.

In 1976 the story would be included in the Malzberg collection Down Here in the Dream Quarter.

This one first appeared in Roger Elwood's Children of Infinity, but I read it in Robert Hoskins's The Liberated Future: Voyages into Tomorrow, printed in 1974. Children of Infinity is a collection of SF stories specifically aimed at "young readers." 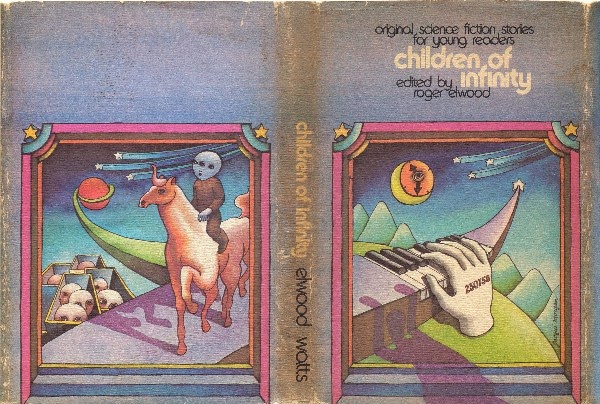 Maybe I'm young at heart because "Conversations at Lothar's" really affected me--this story is a good example of what I am looking for when I read SF, why I read SF in the first place.  Malzberg quickly and efficiently (in less than five pages) sketches out a world and characters that are at once strange and easy to understand, to empathize and identify with.  This story also provides some of that "sense of wonder" and "paradigm shift" business that the critics talk about being one of SF's defining characteristics, depicting characters who suddenly gain a new perspective about the realities, and possibilities, of their world.

I think "Conversations at Lothar's" has had more of an emotional impact on me than any other Malzberg story.  Most Malzberg stories are too detached, ironic, and/or difficult to elicit any emotional response from me, but this one is clear and sincere.  Is "Conversations at Lothar's" an example of Malzberg stretching himself, or just the opposite, a case of Malzberg limiting himself to quotidian techniques that a boring conventional person like me can grok? 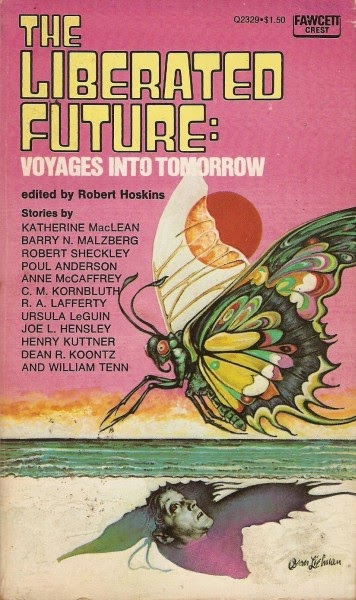 In the late 22nd century the government controls every aspect of your life--"the Bureau" assigns you a place to live and a mate, provides all necessities, and keeps a close eye on you via reports from your cohabitants.  People almost never go outside and are almost never alone.  In the teen-aged narrator's apartment building lives an unusual man, Lothar, who has a collection of scrapbooks which provide evidence that in the past people had far more freedom.  Is Lothar crazy?  A dangerous anti-social element?  Is there any value in the knowledge he relates to the narrator?  And what will happen to that knowledge if somebody reports Lothar and the Bureau carts him away?

A powerful and beautiful story; I'm a little surprised it has not been more widely reprinted (I believe it has only appeared in the two anthologies I have mentioned.) Maybe editors consider it too childish, or too derivative of things like 1984 and Fahrenheit 451.  And it is uncharacteristic of Malzberg's work.  I, however, do not mind admitting that this is probably my favorite piece of fiction by Malzberg.

These three Malzberg stories, to me, seem better than his average.  Recommended.
Posted by MPorcius at 11:53 AM