In January I read my first Kris Neville story and thought it was pretty good, so this week I took a gander at the SFFaudio PDF page and sifted through my anthologies and read three more stories by Neville, all written within ten years of World War II.

I found "If This be Utopia..." at the very cool page of public domain stories in PDF format at SFFaudio's website. They seem to have made the page more user-friendly since I last looked at it, so bravo to those guys.

"If This be Utopia..." first appeared in the May 1950 Amazing Stories, and was reprinted in the June 1966 issue.  The PDF scan at SFFaudio includes the illustration by Enoch Sharpe (the illo is a little too spoily in my opinion.)

This is one of those stories about a future society in which the government (in this case, "the New State") runs your whole life, determining where you can live, what job you will have, and keeping an eye on you via informants.  Our main character is an executive/manager type, stressed because he isn't sure he can meet his various quotas and thus suffering nervous tics and hallucinations.  An interesting element of the story is how he is complicit in the cruel regime, oppressing his subordinates in a way similar to how his superiors oppress him.  The New State not only makes victims of its citizens, but transforms them into villains, steals not only their freedom and their lives (at the end of the story the protagonist is euthanized) but their humanity.

Not a terrific story, but well-written and very much in tune with early- and mid-20th century issues, like the pressures of modern business, life in the Soviet Union and Nazi Germany, technocratic, scientific management and efficiency movements, etc. Not bad. 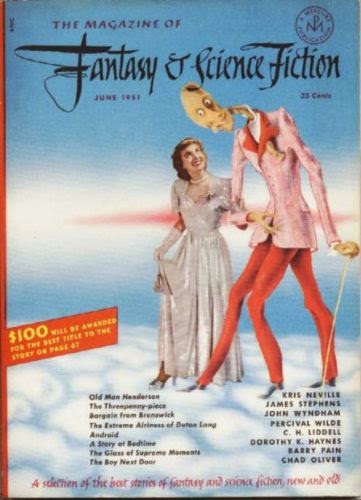 This one was first published in the June 1951 issue of The Magazine of Science Fiction and Fantasy, which has a cover you could use as the basis for your master's thesis in gender studies.  I read it in the 1970 paperback anthology Special Wonder: Volume 2, edited by J. Francis McComas.

When I read Kris Neville's 1949 story "Cold War" last month I noted how I felt like it presaged Barry Malzberg's career with its mentally ill astronauts. I had the same feeling when I read "Old Man Henderson," which also presents a very Malzbergian theme, how the public has lost interest in the space program.

"Old Man Henderson" takes place in a future when Venus and Mars have been colonized, and exotic animals have been imported to the Earth from these planets. Henderson is a retired astronaut, the first man to set foot on the moon, but, instead of being a revered hero, everyone in town is sick of hearing his story of the moon landing and he lives alone, avoided by everyone.

A sad and somewhat cynical story; I found it touching.  At 11 pages it is just the right length to accomplish its purpose, and Neville employs a smooth engaging style. Thumbs up! 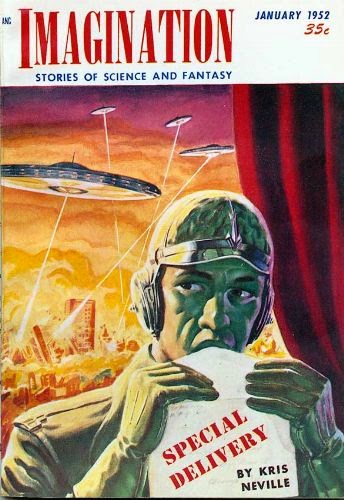 Originally appearing in Imagination, "Special Delivery" is a quite good adventure/espionage thriller.  I read it in the 1965 anthology Man Against Tomorrow, edited by William F. Nolan.  Neville is very good at conveying suspense and depicting the tension suffered by the protagonist, an alien Knoug disguised as a human, on Earth as part of a team softening up our beloved world for the impending alien invasion!  The novella (it's over 60 pages in the edition I read) also includes fresh and exciting SF ideas.

The expansionist Knoug space empire is at war with the Oholos.  Earth is strategically located on the Oholo system's "blind flank;" if the Knoug can take the Earth the Oholos will be in trouble.  Parr, our main character, is a Knoug "advanceman."  He sneaks into Los Angeles and sets up a shipping operation--renting a warehouse and hiring local laborers and truckers--to prepare and send out a mass mailing on a specific date, just days before the scheduled Knoug invasion.  This mass mailing will soften up the Earth's defenses, but Neville wisely doesn't let on how these thousands of deliveries will weaken the Earth.  For page after page I was wondering what could be in all the parcels, and was genuinely surprised when the truth was revealed.  The surprise is satisfying because Neville plays fair with the reader; the answer is foreshadowed, and someone more clever than me could have figured it out.

While Parr is managing this whole advance operation he is also battling against the Oholo agents who are on Earth.  The Knoug and Oholo are psychics or telepaths or whatever you want to call them, and Neville presents a whole system of mental warfare in which the Knoug and Oholo try to detect, evade, and destroy each other with mental shields, probes, and assaults.  As in the other Neville stories I have read, he focuses on the psychology of his characters, portraying the effects of stress upon Parr's mind as he struggles to complete his mission, survive, and deal with doubts about himself and his life.

Very good.  A few years ago the people at Armchair Fiction and Sinister Cinema put out an edition of "Special Delivery;" it, and their whole line, are worth a look.

Three stories it is easy to recommend; now I am really looking forward to reading more of Neville's work.
Posted by MPorcius at 6:58 PM