Rura spent her days learning to forget that she had ever been an exterminator, learning to become a woman....  She began to feel proud of her swollen breasts and swollen belly. These were the outward and visible signs of the true nature of womanhood. 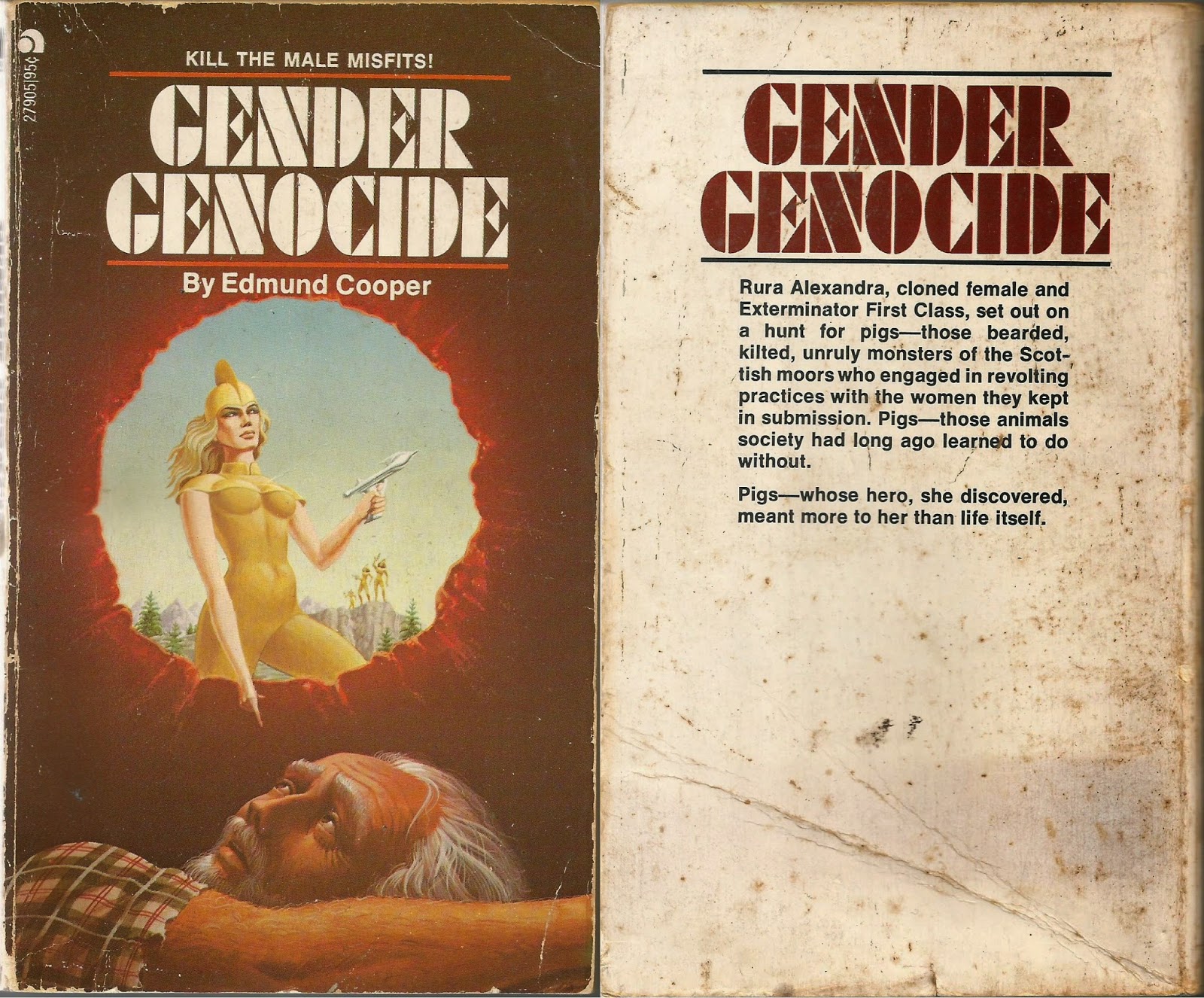 In our last installment I invoked the name of Edmund Cooper, so it seemed appropriate to follow up Bob Shaw's well-received Orbitsville with fellow Briton (or "Britisher" as Ace puts it) Cooper's 1972 Who Needs Men?   I own a copy of the sole American edition, which doesn't even include any cover blurbs.  This paperback, published by Ace in 1973, bears the title Gender Genocide and has a sort of folk art/art deco cover by an artist nobody can identify.  I recently goofed on the cover of Robert Bloch's Lori because the illustrated woman had over-sized man-hands, and I find the diminutive right hand of the woman depicted on Gender Genocide to be equally disturbing.  The Portuguese and German editions of the novel also have unsettling covers.

Via twitter, internet SF blogger extraordinaire Joachim Boaz suggested to me that the critical consensus on Gender Genocide is a big thumbs down, but let's see for ourselves if this ain't rock 'n' roll, diamond dogs! 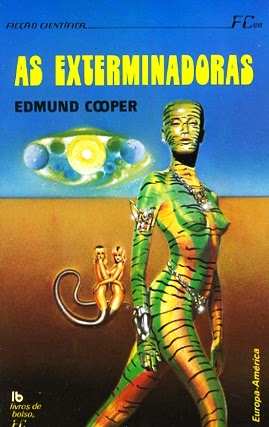 Who Needs Men?/Gender Genocide takes place in the 23rd century in the British Isles.  London is the capital of the Republic of Anglia, the successor state to Great Britain; the Republic's population consists of three million cloned women.  The small number of British men left alive, thirty thousand or so, hide in the wilds of Wales and Scotland, where they and their families are subject to being hunted by the helicopters and hover cars of the Republic's Execution Squads.

How did we arrive at this world turned upside down?  Back in the 21st century biological warfare spawned a plague to which men were more susceptible than women, which set the stage for a worldwide feminist revolution that saw women take over and men driven into hiding.  The policy of the current prime minister, Curie Milford, is to pursue the male until he is completely annihilated.

The first 70 or so pages of the novel are amusing thanks to all the wacky ways Cooper depicts a post-feminist revolution world.  The government, which relies heavily on propaganda and censorship (like the Papacy from 1559 to 1966, it maintains an Index of forbidden books) has its citizens convinced that Shakespeare and Leonardo were in fact women in disguise.  Words and concepts like "pregnancy" and "wife" are so disgusting that young women get sick to their stomachs when they hear them.  Buckingham Palace is now called "Liberation House" and Queens College is now "The College of Insemination."  The characters say things like, "Goddess damn you!" and "Ovaries alive!"  When one woman says she wants to go by the book, another snaps, "Stick the book in your vagina!"  The people hiding in the hills are called "regressives," the men "pigs" and their wives "sows."  A character who is credited with valor in the fight against regressives up in Scotland is "awarded the silver nipple for gallantry." 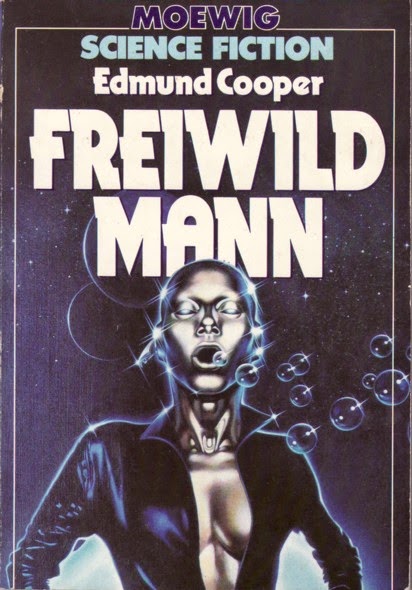 Our lead character is Rura Alexandra, who at the start of the novel has just graduated from the College of Exterminators and, along with other recent graduates, is on her first mission to the Celtic fringe, whipping over the lochs and heather in a hover car, looking for "pigs" to shoot down with laser rifles or blow up with grenades.  A major theme of Cooper's book is that no amount of government propaganda can change human nature, and it is clear that Rura and some of the other newly minted Exterminators in her squad are none to eager to exterminate.  Some even find that the customary lesbian orgies leave them feeling empty.  To distract themselves from their unhappiness they turn to booze, which, as you can imagine, hampers their combat abilities when it comes time to go toe to toe, crossbow and dirk versus laser rifle and grenade, with the regressives.

Rura's comrades are killed and she is captured and gang raped, then made the wife of Diarmid MacDiarmid, leader of one of the most tenacious bands of regressives.  Away from England and all that propaganda, Rura's true heterosexual nature blossoms and she falls in love with Diarmid in short order.  They enjoy a tragic love affair in the beautiful Scottish Highlands, amidst the death and destruction of the Republic of Anglia's war of extermination, and Cooper really lays on the romantic and melodramatic slosh:


Knives and forks and plates would have been incongruous.  The fish were laid on leaves and delicately dissected by fingers.  They tasted as fish had never tasted before.  They tasted of stolen time.

"Make us a fire, then we can hold each other and go to sleep as you wished.  If there are nightmares, we will drown them in orgasm.  I doubt that we could drown them in whiskey.  There is not enough whiskey in the whole of Scotland to wash away this day's work."

The air was sharp, the nights cool.  Sere leaves fell from beech, oak, ash.  The evergreens preserved their illusion of immortality.

Rura finds she enjoys cooking and cleaning and housework and being a mother.  But the Exterminators are relentless, and Rura and Diarmid don't live long enough to see the birth of their child.

At 200 pages, Gender Genocide is too long, and the second half seriously drags.  We could probably do without at least one of the numerous and tepid action scenes.  We also spend way too much time admiring the scenery and contemplating the history and literature of Scotland--did Cooper get a grant from the Scottish Tourism Board to finish this novel?  (Maybe, in an alternate universe, VisitScotland.com, instead of telling you to visit Scotland because it inspired Diana Gabaldon's Outlander, is advertising its connection with Gender Genocide.) 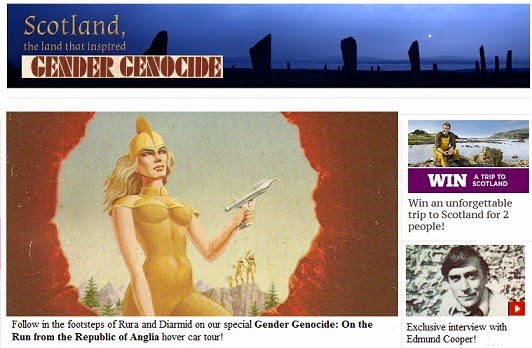 I liked the parts set in England, among the cloned women, when Cooper is satirizing feminism and revolutionism; they are strange and original.  Unfortunately this material only constitutes about a third of the book.  The "love and survival in post-apocalyptic Scotland" part of the book, like 130 pages, is totally uninspired and basically pointless--we get all this repetitive detail about how Rura and Diarmid live off the land and avoid the Exterminators, and then in the last chapter they just get lasered down. What I consider the climax of the book, when Rura expresses her love for Diarmid despite all her misandry training, is on page 92!

Gender Genocide would have worked much better as a long short story or a novella, like 100 or 120 pages, maintaining its focus on the totalitarian women's state, jettisoning the Highland camping travelogue, and keeping the love story to a bare minimum.  All of Cooper's themes, like how most women want to have love relationships with men and bear a man's child, are right there in the first half of the book.

Obviously, this book's cavalier attitude towards rape, unflattering portrayal of lesbians, endorsement of traditional gender roles, and assertion of the primacy of nature over nurture are going to offend many people.  The greater crimes, in my eyes, are that the book feels padded, the characters are uninteresting, and the love story and adventure elements are boring.  I'm giving Gender Genocide a marginal/moderate thumbs down; the concept behind the book has potential, but it is poorly executed in a way that is unforgivable.
Posted by MPorcius at 3:05 AM