"As far as I can tell, the object out there...the thing we have discovered is a space ship over three hundred million kilometres in diameter!" 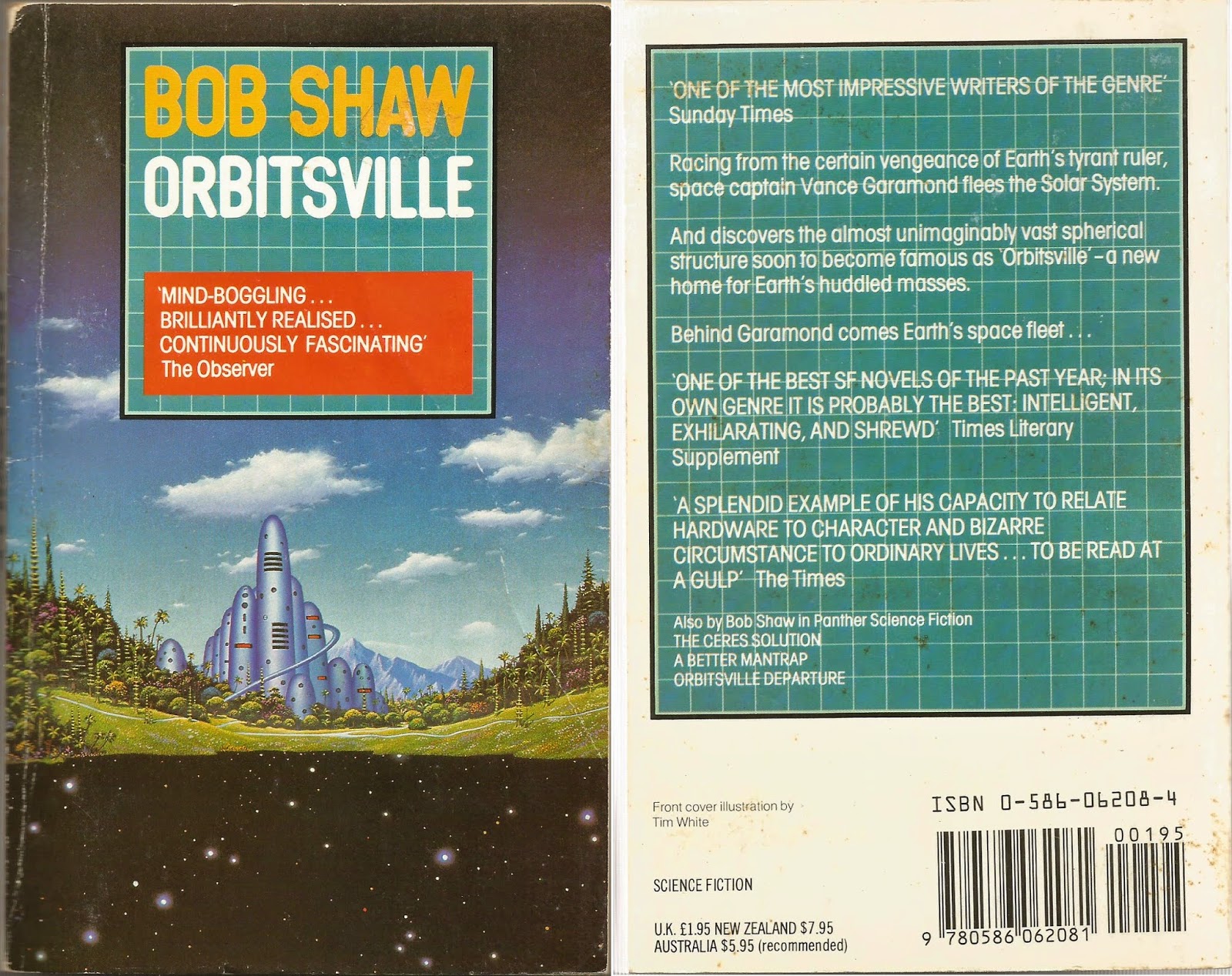 Bob Shaw's Orbitsville, which first appeared as a serial in Galaxy in 1974, has received enthusiastic acclaim.  In 1975 it won the British Science Fiction Award for Best Novel. The book's cover is awash in high praise from such institutions as The Times Literary Supplement and from such luminaries as our buddy Edmund Cooper.  I recently acquired a copy of the 1985 Panther paperback of the novel, and this week I read it.

From its first page I was convinced that Orbistville was worthy of its renown; Shaw has a good writing style, and quickly seizes the reader's attention with compelling characters, brilliant images and a tense, suspenseful scenario. 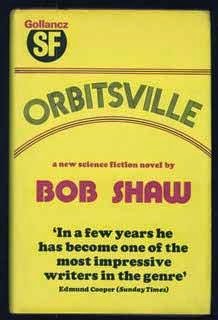 The pollution-ravaged Earth of the future is ruled (apparently informally) by a cruel and capricious female, Elizabeth Lindstrom, President of Starflight, the firm which has a monopoly on interstellar travel.  In a time when most women take advantage of technology that can render them perfect physical specimens, Lindstrom is content to be hideously ugly and exude a disturbing odor. One of her space ship captains, Vance Garamond, is told to babysit Lindstrom's nine-year-old son for a few hours, but he botches the task--the brat falls and cracks his skull.  Knowing he faces summary execution by the erratic and autocratic President, Garamond bolts from her palace, collects his wife and son, and they flee the Earth in his exploration ship.  Unfortunately, there is only one other habitable planet known to exist in the universe, and Lindstrom basically runs that one as well.

The early part of the novel is plotted like some kind of high seas adventure story set in the 16th century-- the star ships even have to deal with interstellar weather in the form of ionic winds, and Garamond uses an ancient map to find a third habitable "planet." This is when we shift into Larry Niven territory; the heavenly body Garamond discovers is a Dyson sphere over one AU across which someone dubs "Orbitsville." The inner surface of the thing has an Earth-like atmosphere, artificial gravity, and is covered in supernutritious and easy to cultivate grass.  There is enough room on the bucolic inner suface of Orbitsville to accommodate the population of the overcrowded Earth a billion times over--Garamond has discovered a paradise, and suggests the entire human race move into it and that money and private property be abolished.

Lindstrom's space fleet catches up to Garamond's ship, but she has to put her lust for revenge on the Garamond family on hold, because Garamond is a world-famous celebrity.  (Shaw doesn't make it very clear, but even though sometimes Lindstrom acts like Queen of the galaxy and murders people with impunity, apparently there is some kind of Earth government and she has to take it, and public opinion, into consideration.) Lindstrom, who fills the role of evil businessperson we so often see in fiction, decides she will continue to charge people for transporting them across the galaxy, and immediately begins shipping in colonists to Orbitsville (or as she calls it, "Lindstromworld.")  Unlike the many college professors I've met in real life who are feverishly hunting for grant money when they aren't railing against capitalism from their gorgeous Manhattan apartments and Hamptons summer homes, Garamond practices what he preaches and refuses the monetary rewards Lindstrom offers him for finding this paradise.

The third and final act of the 187-page book has Garamond off exploring a different part of Orbitsville's star system.  One of Lindstrom's minions sabotages his ship (oh naughty sneaky), dooming it to a fatal collision.  We get some solid traditional hard SF scenes as the scientists and engineers in Garamond's crew take up their computers and welding torches and rebuild the ship in eight hours so they can survive the crash.  They crash inside the Dyson sphere fifteen million miles from the settlement, and from the wreckage build a squadron of propeller planes so Garamond can make his way back to Lindstrom and get his revenge on her!  He expects the trip to take over two years!

Orbitsville is quite good.  The adventure stuff, the science stuff, and the character stuff all work.  Garamond is obviously the hero and Lindstrom obviously the villain, but both are interesting and nuanced, with Garamond causing many of his own problems and putting other people at risk with his negligence and selfishness, and Lindstrom idiosyncratic and even a little sympathetic in her broken-heartedness over the death of her son.  (She reminded me of Medea, a woman both evil and wronged.  This is another of those SF books which would be an interesting subject for feminist analysis; Garamond's wife is also an interesting character.)  Shaw cleverly sets up parallels between Garamond and Lindstrom: both seek revenge, and even as Garamond resists Lindstrom's authority, Garamond's own crew resists his.

The actual meat of the story, the space travel and alien artifacts, reminds me of something Poul Anderson or Larry Niven might write, but Shaw's writing style and characters are better, making for a really enjoyable piece of work.  And people who think "government is the only thing we all belong to" and find Anderson-style libertarianism tiresome will be thrilled with the last chapter, in which the formerly out-to-lunch government suddenly reasserts itself with the aid of that iconic hero of the center left, the investigative journalist, and throws Lindstrom in prison.  In an italicized epilogue we are told colonization of Orbitsville leads to absolute equality and a homogenization of mankind; Orbitsville is a trap set by ancients designed to domesticate adventurous and aggressive societies like our own.

Recommended.
Posted by MPorcius at 5:28 AM