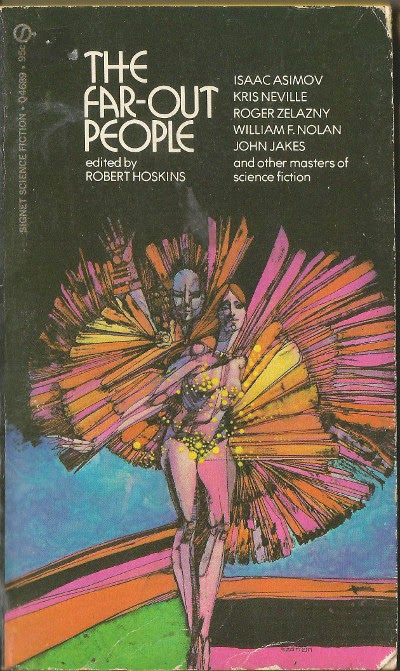 For two dollars I picked up The Far-Out People, an anthology of stories edited by Robert Hoskins on the theme of "worlds of tomorrow" published in 1971, the year of my birth.  The cover painting is signed Szafran, and the back cover has an ad for what looks like a sex novel about a young woman who flies around the world, seeking the finest of suckers.

In his brief intro, Hoskins enthusiastically declares that "Science fiction is tomorrow, come alive today," and that the stories collected in this book "are by some of today's most intriguing writers of science fiction, both new and old."  I read three stories today by authors I already like, Alexei Panshin's "The Destiny of Milton Gomrath," Barry Malzberg's "Cop-Out," and Roger Zelazny's "Angel, Dark Angel."

"The Destiny of Milton Gomrath" by Alexei Panshin (1967)

Alexei Panshin is inextricably linked in my mind with Robert Heinlein.  I've twice read Panshin's Rite of Passage, which is a sort of pastiche of one of Heinlein's juveniles, and a very good novel, and in college I read some of Panshin's book on Heinlein.  I still remember some of his criticisms of The Moon is a Harsh Mistress. 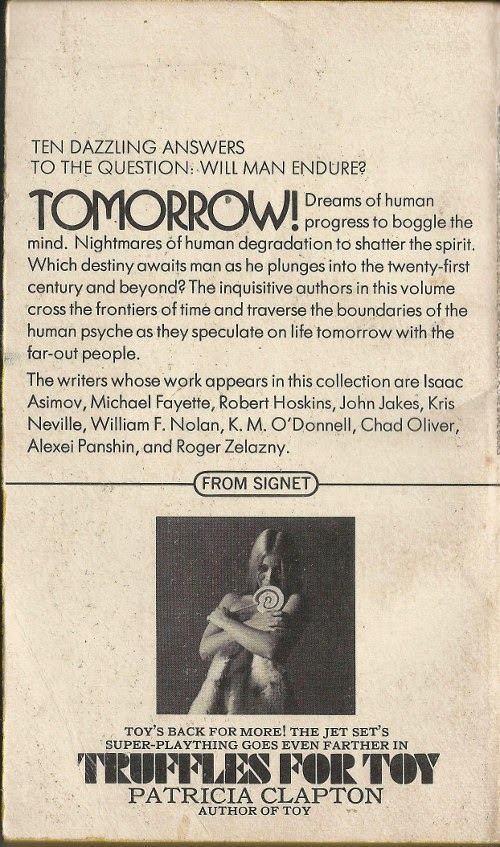 "The Destiny of Milton Gomrath" first appeared in Analog, where it took up two pages. It is an obvious joke that has nothing to do with the future or "life tomorrow with the far-out people."

Gomrath is a guy with limited intelligence who works on a garbage truck.  He was an orphan, and dreams he will someday be discovered by a long lost relative and elevated to a finer life.  Another guy teleports in, tells Gomrath that he somehow was born into the wrong universe, that he belongs in a universe full of castles, knights, dragons, etc.  As we can see coming, when Gomrath arrives in the sword and sorcery world he finds his true destiny is to be a landless laborer who sleeps on a pile of straw and spreads manure over the rose bushes with a pitchfork.

Speak of the devil, here is Barry Malzberg himself, writing under one of his pseudonyms.  "Cop-Out" first appeared in the July 1968 issue of Escapade magazine, an adult publication with which I am not familiar.  In Malzberg's own intro to "Cop-Out" in Final War and Other Fantasies he lists all the venues that rejected the story, ten in total, before "an understanding editor" at Escapade accepted it.

I have to say that this story doesn't have anything to do with "worlds of tomorrow," either.  It appears to be a first-person narrative by one member of a two man team, sent to New York by "Headquarters" to perform a mission.  It is a little oblique, but it seems that the two beings are angels, or similar agents from heaven, and their mission is to put on passion plays.  They get an opportunity to put on a performance that will be televised, but this is some kind of trap, set by agents from Hell, and the two heavenly agents are killed and wake up back in "Headquarters" where their superiors are unhappy with their failure.

Yesterday I endorsed Malzberg's three page story "Revelation in Seven Stages" even though it lacked any kind of character or plot because its central idea (AKA "gimmick" or "gag") was evocative and novel.  These short gimmicky stories live or die based on the gimmick.  "Cop-Out"'s gag is weak and tired, it reminded me of movies like "It's a Wonderful Life" with its superior angels sending subordinate angels down to Earth on missions that could lead to promotions.  (In "Cop-Out" the narrator talks about being "Grade" or "Class 9.")

Another thumbs down for The Far-Out People. This one first appeared in Galaxy, and is the subject of the cover illustration.  (The creature depicted is a Simule, an artificial organic computer, one small component of a galaxy wide network of such computers.)

"Angel, Dark Angel" is actually about life in the far future (finally.)  Many planets have been colonized by man, and this vast civilization is run by a city-sized computer, Morgenguard; there appear to be no politicians or lawyers, Morgenguard runs everything.  In this task the computer has ten thousand aides, its Angels of Death, highly trained, cybernetically-enhanced assassins.  When Morgenguard decides that a citizen must die, because he has committed a crime, or would alter this perfect society, or just because of overpopulation pressures, an Angel of Death teleports next to the victim, kills him in seconds, and then teleports out.

The plot of the story, which is a mere 11 pages, is structured much like a spy thriller or detective story.  A woman, Galatea, has managed to defeat multiple Angels of Death sent against her.  So, one of the very best Angels of Death, Stain, is brought out of retirement to get her.  Stain befriends Galatea, begins an erotic relationship with her.  He learns of Galatea's belief that Morgenguard's rule has lead to a static, sterile society, not the kind of society which produced her heroes, depicted on a fresco in her home: Homer, Virgil, Dante, Leonardo, etc.  Galatea shows him her invention, the Simule, and convinces Stain to join her in her mission.  Stain launches a suicide attack on Morgenguard, sacrificing himself to start a new era of human liberty and progress.  Presumably Stain will join Leonardo and the others up on the fresco as one of the heroes of human progress.

This story is reasonably good, nothing special, but I liked it.

I have to say that my experience with Far-Out People has been a little disappointing.  The Malzberg and Panshin stories are weak, and do not fit the theme; the Zelazny story is just average.  But they can't all be winners, can they?