Three Tales of the Dead about Mummies: Poe, Bloch, Malzberg 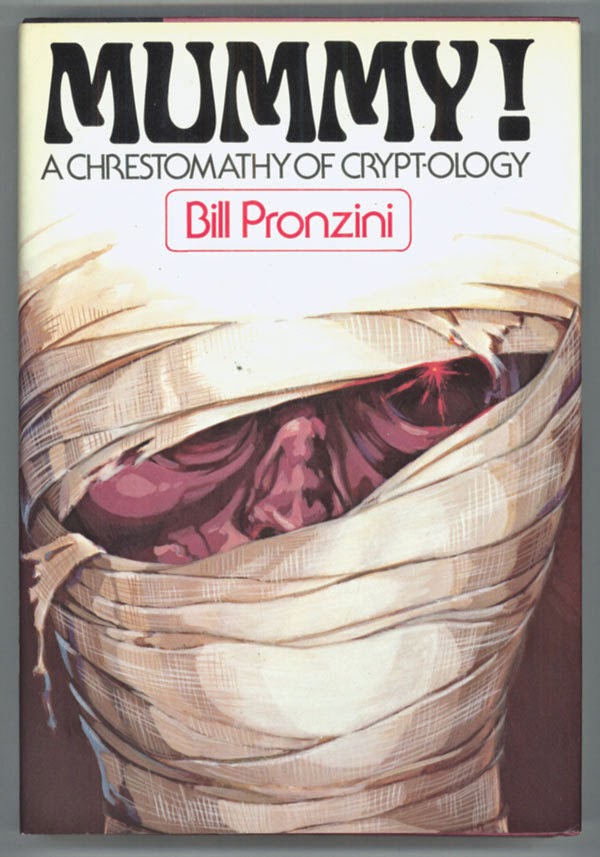 The second part of Tales of The Dead is a reprint of editor Pronzini's book of stories about mummies, Mummy!, first published in 1980.  Over the last few days I read three of these stories from the 1986 edition of Tales of the Dead I got at the library.

Imagine my surprise to find this story a big joke.  A guy goes to sleep after eating four pounds of Welsh rarebit (apparently famous for causing bad dreams; witness Winsor McCay's comic strip) and then is awoken by a message: a friend is about to open a mummy case.  The narrator rushes off to witness this exciting operation in the company of several other intellectuals.  On a whim, electricity is applied to the mummy (in the late 18th and early 19th century, applying electricity to dead things to see what might happen was a common pastime for thoughtful people) and Count Allamistakeo of Egypt arises from his five thousand year slumber.

The Count asserts that all nineteenth century knowledge of the ancient world is inaccurate, and this sets the stage for Poe's tepid satire, which is an attack on democracy and Victorian-era triumphalism, particularity American pride in the architecture of New York and Washington D.C.  Count Allamistakeo insists that Egyptian architecture was far more grand than any modern building, and that Egyptian experiments with democracy led to mob tyranny.  Nineteenth century clothing and consumer goods also receive Poe's scorn.

This is an interesting story if you are curious about Edgar Allan Poe's attitudes, but it is not very funny or entertaining, and it is certainly not the horror or adventure story I was hoping for.

This is more what I have in mind when I decide to read a story from a book entitled Mummy! Greedy and ruthless archaeologists let no obstacle or moral qualm get in their way in their quest to unearth an Egyptian tomb reputedly housing a fortune in gems.  The tomb turns out to be an elaborate sorcerous trap; the soul of an evil Egyptian priest (servant of a crocodile-headed god, no less) still resides in the mummy.  This diabolical priest had his eyes removed before mummification and replaced with mystical jewels; through these jewels the mummy hypnotizes one of the archaeologists and switches souls with him.  The foolish American is now entombed in the crumbling mummy, while the ancient Egyptian priest marches out into the world in a young healthy body, no doubt intent on restarting his career of unmitigated evil!

This story first appeared in Weird Tales, and, though Bloch has his own writing style, it totally fits in with the H. P. Lovecraft, Robert Howard, and Henry Kuttner stories from Weird Tales I have read and enjoyed.  I haven't had very good luck with the Bloch stories I have read during the period I have been writing this blog, so it was gratifying to read a Bloch tale I can endorse: "The Eyes of the Mummy" is a solid horror story, with good tone, pacing, and plot.

It looks like the prolific and unique Barry Malzberg wrote this story specifically for his friend's anthology; I don't think it has appeared anywhere else.  So it looks like all you Malzberg completists out there will need a copy of Mummy! or one of the various editions of Tales of the Dead on your shelves!  I recommend the 1986 edition, which includes Malzberg's name on the cover with such literary giants as Robert Louis Stevenson, Tennessee Williams, and Edgar Allen Poe.

I suppose you could dismiss this three (3) page story in seven (7) chapters as a joke, but there is nothing silly about it (there's "no Count Allamistakeo") and Malzberg tells it deadpan and with his usual pessimism.  By the middle of the 21st century the human race has exterminated itself in what Malzberg characteristically calls "the final war."  In the year 7528 space aliens arrive to survey the dead Earth.  (Cue "Watcher of the Skies.")  With their sophisticated scanners they find hundreds of thousands of Egyptian mummies.

The mummies are very valuable to the aliens.  The aliens are determined to explore and colonize as much of the universe as possible, and so send out countless probe ships.  An ancient law, regarded as taboo, prohibits sending out unmanned craft, and only maniacs and criminals would volunteer for such treacherous or boring duty.  Because the mummies are so well preserved (the aliens have never encountered such well-preserved corpses) they fit the (apparently not very exacting) criteria for space ship personnel.  The mummies are gathered in Queens, New York, and Earth becomes a major base for sending robot probe ships out to the furthest reaches of the universe, each "crewed" by a number of Egyptian mummies.

In the final paragraph of this odd story Malzberg asserts that eventually these probe ships, on their endless one way trip, will encounter a phenomenon which will reanimate their mummified occupants, and the human race will be reborn, with the Egyptians again as its foremost representatives.

A strange story with a strange idea (presumably a nod to the ancient Egyptians' concept of  Ra's Boat of Millions of Years); I liked it.

All three of these stories had some value; I feel like Pronzini did me a good turn by collecting these ones.  I'm thinking of reading three more stories from Mummy! in the coming week.
Posted by MPorcius at 4:27 PM