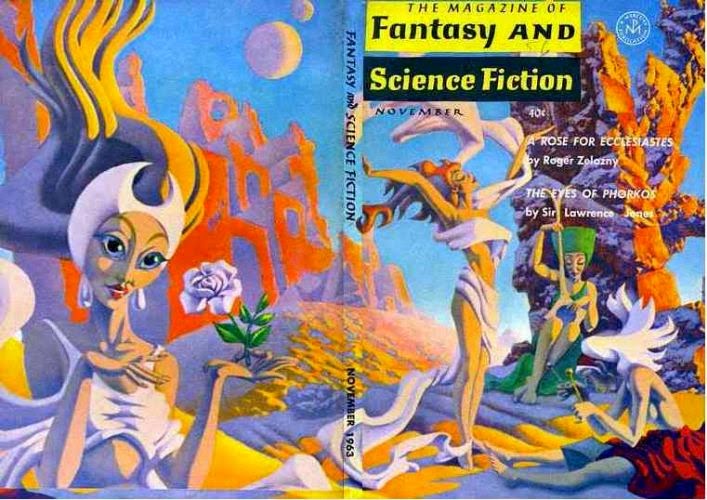 Today I continued my reading of the 2001 edition of The Doors of His Face, the Lamps of His Mouth, a collection of stories by Roger Zelazny first published in the 1960s.

I feel like this is one of Zelazny's more famous stories, that I hear about it all the time.  It got the cover of The Magazine of Fantasy and Science Fiction, an elaborate painting by Hannes Bok.  I read "A Rose for Ecclesiastes" many years ago, but forgot what went on in it, so this was almost like reading it for the first time.

Our protagonist is Gallinger, a famous and arrogant poet, a child prodigy raised by a fundamentalist father from whom he escaped to bohemian New York City.  Gallinger is also the first Earthman allowed into a room where the Martians keep their annals, the first Earthman to learn the old "High Tongue" of the Martians.  Zelazny slings lots of learned references at us, Dante, Shakespeare, Sartre, Havelock Ellis, the Bible, and more, but also reminds the reader of Edgar Rice Burroughs; the first person narrator tells us that a "Carter" was on the first expedition to Mars, and on the very next page Zelazny uses the word "bugs" to describe alphabetical characters, just like Burroughs did when Tarzan was learning to read.

The arrogant poet charms the Martians, and like in an orientalist fantasy (Zelazny explicitly compares the Martians to East Asians and South Asians) he falls in love and has a sexual relationship with a dancing girl.  Gallinger also learns that the Martians are doomed - some kind of environmental event has sterilized the Martian population, and the Martians he knows will be the last generation of the red planet's people.  If the Martian civilization is to be remembered, it will be remembered by Earth people through Gallinger's poetry and his translations of Mars's historical and holy books.

But wait! By impregnating the dancing girl, and then beating a hulking Martian fighting man in hand to hand combat, Gallinger has fulfilled an ancient Martian prophecy and saved the Martian race!  I was a little surprised by this turn of events, though perhaps the reference to "Carter" was a foreshadowing of the pulpish way the plot would be resolved.

(Isn't This Immortal also full of sophisticated literary references, but have as the resolution of its plot a brutal hand to hand fight between a genius and a colossus?)

I have to admit I think the story would have been better if the Martians went extinct and Gallinger's life's work was to be their Homer, preserving their spirit for the ages.  Zelazny tries to keep the tone tragic by revealing that the dancing girl doesn't love Gallinger, but was only having sex with him because the prophecy said to.  Gallinger attempts suicide with sleeping pills as a result, but fails.

It would be easy to criticize "A Rose for Ecclesiastes" for being some kind of male fantasy about sex with an exotic woman, and as a vehicle for Zelazny to brag about how familiar he is with major poets.  But the heartbreak of cross-cultural romance is a classic theme, and if Zelazny helped introduce SF readers to W. H. Auden, Ezra Pound and Rainer Maria Rilke it is no doubt to the good.  Most importantly, "Rose for Ecclesiastes" is well-written and well-paced, and so I quite enjoyed it, even though I would have preferred a more tragic and less heroic ending.

I've focused on the exotic love affair, poetical, and adventure aspects of the story, but "A Rose for Ecclesiastes" is also about attitudes towards religion, about being able to embrace the literary value of holy books while remaining skeptical of their mythical and philosophical aspects.  One of the strong points of the story is that Zelazny packs lots of stuff into it, and yet it doesn't feel dense, it flows smoothly.

On a down note, in this edition (The Doors of His Face, the Lamps of His Mouth, ibooks, 2001), "A Rose for Ecclesiastes" has quite a few irritating typos.  I don't recall the first three stories in this edition suffering in this way.

This is a gimmicky two-page joke switcheroo story: it depicts a world in which dragons tie up a virgin female dragon and sacrifice her to a knight in shining armor.

Like "The Monster and the Maiden" this is a brief joke story which first appeared in Galaxy.  This one is better, as there is some novelty to it, and actual characters.  A man tries to capture an intelligent rock, he and the rock trade one-liners, and then the human blunders and is killed.

This one I would judge acceptable.

"A Rose for Ecclesiastes" is a superior piece of work, and I won't hold the two 1964 gag stories against Zelazny.

I'm just one third of the way through my 2001 edition of The Doors of His Face, the Lamps of His Mouth, and expect that there is more good reading ahead.
Posted by MPorcius at 2:56 PM