Three Tales of the Dead about Voodoo: Woolrich, Bloch & Stevenson 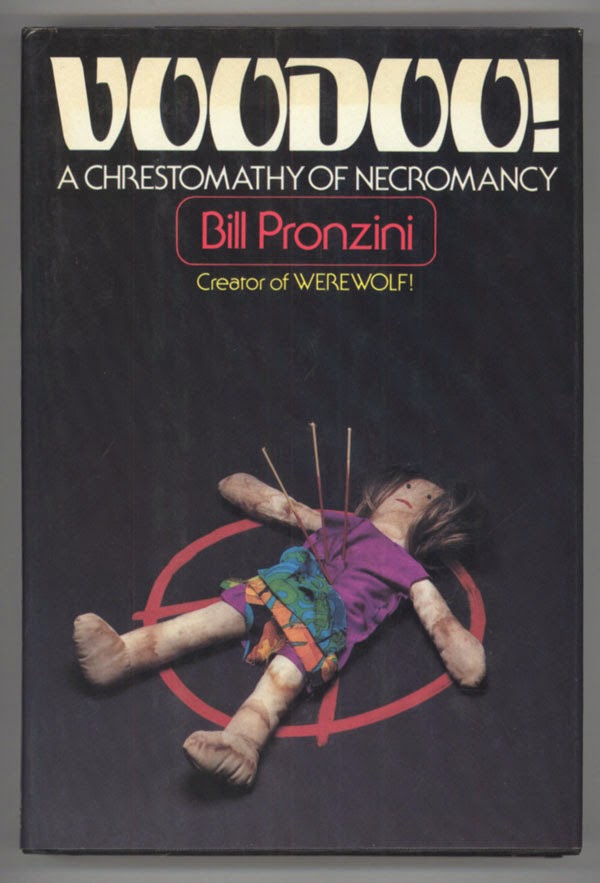 From the library I have checked out a copy of the 1986 edition of Tales of the Dead, edited by Bill Pronzini, frequent collaborator with Barry Malzberg.  The first third of Tales of the Dead is a reprinting of the text of Pronzini's 1980 anthology Voodoo!  This week I have read three of the Voodoo (am I supposed to spell it "Vudu" nowadays?) stories from the book.

(As an aside, I recently introduced my wife to the song and video "Mexican Radio" by Wall of Voodoo, which should be, and perhaps is, some kind of cult classic.  Maybe the video is considered insensitive nowadays?  The image at 2:34 has got to be offensive to somebody.)

In his intro Pronzini praises Woolrich for being unrivaled in expressing a particular kind of pure terror, and reminds us that literally scores of movies and TV episodes have been based on Woolrich's work.  We all love Jimmy Stewart in Rear Window and Barbara Stanwyck in No Man of Her Own, don't we?

"Papa Benjamin" takes place in New Orleans.  I spent a few days in New Orleans over five years ago.  It wasn't my kind of town; I don't care about jazz, I don't drink, and the art museum didn't have the kind of art I like.  Still, the architecture was interesting, the World War II museum is cool, and my wife and I stumbled on a restaurant with very good Turkish/Greek food.  I haven't had Turkish food since I left New York over three years ago.  Frowning emoticon.

Anyway, "Papa Benjamin" is the tale of Eddie Bloch, famous band leader, one of the "ten idols of America."  Bloch staggers into a New Orleans police station, emaciated, with a face like that of a victim of a long illness about to die.  He hands a pistol over to the cops and declares that he has killed a man, a "colored man" known as "Papa Benjamin."

Bloch tells the fuzz the story of how he sneaked into a voodoo ceremony in order to steal ideas for his next big number.  When the "negroes" catch him his only means of escaping alive is to pretend to join their cult.  As part of the initiation he has to drink blood.  Yuck!  But it all seems worth it when the song he writes based on the voodoo drums and chants is a hit and gets his career back on track.  But then he starts to feel weak, to lose weight.  He visits the finest doctors and psychologists (Woolrich uses the word "alienists") in New York and London, but they can't figure out the cause for his ill health.  When he's little more than a skeleton he returns to New Orleans and confronts the voodoo leader, Papa Benjamin, and shoots him down with a pistol.


This story isn't very good.  There are two scenes in the "hard-boiled detective" style in which a private eye or a tough-as-nails police detective busts into the voodoo house and domineers the blacks, literally blasting holes in them with their pistols to get what they want.  The white police detective even disguises himself as Papa Benjamin and imitates his voice, and manages to fool the black worshipers, even though the cop never saw Papa Benjamin alive.  Besides being ridiculous, these scenes are superfluous, diminishing the horror aspects of the story and piling up poorly defined characters instead of focusing on the real main character, Eddie Bloch.  The story feels too long as it is; even setting aside the violent detective scenes, there are secondary scenes full of superfluous detail, police procedure stuff mainly, like going to see the commissioner and picking up another cop on the way.  When a sentence would have served to tell us this stuff, Woolrich gives us a page.

Instead of wasting our time with the white P.I. and the police detective, Woolrich could have spent more time making Papa Benjamin an interesting character.  Papa Benjamin is the title character, but he barely appears and has few lines.  With more screen time, Papa Benjamin could have been  developed into a fearsomely evil character, or a character driven by the sins of the white man to a terrible revenge.

The story also feels racist, which I suppose I would shrug off if the story was good.  Since "Papa Benjamin" isn't very good, the racist stuff is just one more annoyance.  One black guy is described as "gorilla-like," and the voodoo ceremony includes small animals being sacrificed and the worshipers ecstatically ripping off their clothes to crawl on the floor, where they lick up drops of the animals' blood.  The private detective casually shoots and tortures the blacks to get information out of them.

Disappointing... gotta give this one a thumbs down.

In his intro, Pronzini calls "Mother of Serpents," written by Bloch when he was 19, "one of the most chilling horror stories ever to use the voodoo theme."

Bloch tells this story in a detached, journalistic tone.  It is about a fictional 19th century president of Haiti.  As a child, he was adopted by a Protestant minister, and sent to Europe to be educated.  When he returns to Haiti he has become "an affected dandy," wearing nice clothes and preferring the company of whites and "octaroons" to his fellow blacks.  This angers his mother, who is a voodoo priestess who lives in the hills among the "blood-sucking plants" where "necrophilism, phallic worship, anthropomancy, and distorted versions of the Black Mass were commonplace."  She is a particular adherent of a snake god.  Her son, we are told, is a "tall, coal-black man with the physical skull-conformation of a gorilla [who] harbored a remarkably crafty brain beneath his beetling brow."  He is clever enough, and ruthless enough, to marry a pretty and rich woman whose blood is mostly European, and to become president of Haiti.

The president doesn't invite his embarrassing mother to his wedding or his inauguration, so mom gets revenge by using magic to kill his lovely wife.  The president's army and police force cleanse the countryside, killing and torturing all the voodoo worshipers they can find, finally capturing the mother.  The president tortures his own mother for days before killing her, and makes a candle from her fat.  Then, when he is alone doing paperwork (as we have all seen on the TV news, being president isn't just about killing people, you also have to sit down and sign papers sometimes) the candle comes to life and strangles him, wrapping itself around his neck like a snake! 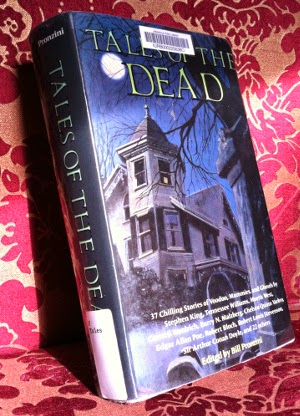 The ending of this story is ridiculous.  I like the idea of a story about how a parent doesn't recognize his or her kid after the kid comes back from college, how college makes the kid abandon his family's religion, ethnic traditions, and class.  But the tone and climax of the story are poor.  At least this one is short, 11 pages.

Marginally better than the Woolrich, but not good... another thumbs down.

Every day I am given reason to lament my mediocre education.  Robert Louis Stevenson is one of those writers who is famous and important, but about whom I know nothing.  I've never read any of his books.  As a kid someone gave me a copy of Treasure Island but I never read it; God knows where it is now.  Until yesterday I had never even looked at a photo of Stevenson; when I googled him I was actually surprised by the photos that came up - Stevenson has a distinctive look, not at all what I was expecting.

So, yesterday I read my first Robert Louis Stevenson story, "The Isle of Voices." It is a stretch to include this story in a book called Voodoo!; the word "voodoo" never comes up, and the story isn't about Afro-Caribbeans, or African-Americans, or African anything. It is also not about death or the dead.  Instead the story is about Hawaiians.  Pronzini can be forgiven his stretching (especially after the weak specimens we had from Woolrich and Bloch) because this story is pretty good.

Keola, a lazy man, has married the daughter of a sorcerer.  The wizard always has plenty of money, but he doesn't seem to do any work, and his son-in-law is envious, and curious.  One day the wizard needs Keola's help in working his sorceries, and Keola learns his money-making secret.  The magician is able to magically transport himself to a distant island where he gathers shells, and with nobody else available to act as a necessary assistant, this time he brings Keola along with him.  The people living on this island, Keola finds, cannot see them, but can hear their voices. When Keola and the magician return to their physical bodies back in Hawaii, the shells have become dollars.

People who cross the wizard tend to disappear or die in mysterious ways, but Keola, after seeing how his father-in-law comes into his money, presses the sorcerer for some cash.  Keola promptly finds himself tricked by the magician and abandoned in the middle of the ocean, but is lucky enough to be picked up by a ship.  He takes a job on the ship, but a month later, not liking the hard work being a sailor entails, jumps ship and takes up residence on an island. To his horror, he realizes that this island is the one where his wizardly father-in-law collects shells!  The old sorcerer, invisible, might discover him at any moment and put him to death!

This story is better than the Woolrich and Bloch stories in almost every way.  It is also much less racist than the other two stories I read from Voodoo!  There are villainous non-whites, but some of the Hawaiians are sympathetic, and Keola and the wizard are actually interesting characters.  Stevenson also pokes fun at the way white people (sometimes to their peril) ignore the knowledge of "natives."

The whole business about using wizardry to collect money from a beach may be a satire on economics or the bourgeois or something of that nature.  It turns out that the Hawaiian sorcerer isn't the only wizard who collects shells from the beach - Keola, when there in his physical form, hears the voices speaking "all the tongues of the earth."  Perhaps Stevenson is commenting on how Third World people see that white people have piles of money but have no idea how they make it, or how working class people similarly see middle class people making piles of money without knowing how it is they do it.  The London banker or New York stock broker goes into his office and later emerges with riches, without having done any physical labor, as if by magic, just like the Hawaiian wizard goes into his house and later comes out with a handful of dollars.

An entertaining and interesting piece of work.  Score one for the Victorians.

The second part of Tales of the Dead is a reprint of Pronzini's book of stories about mummies.  I will tackle that soon; we'll give Robert Bloch a second chance, check in with Barry Malzberg, and read a story by Edgar Allen Poe.  We'll see if the Victorians win round two of this horror story olympiad.