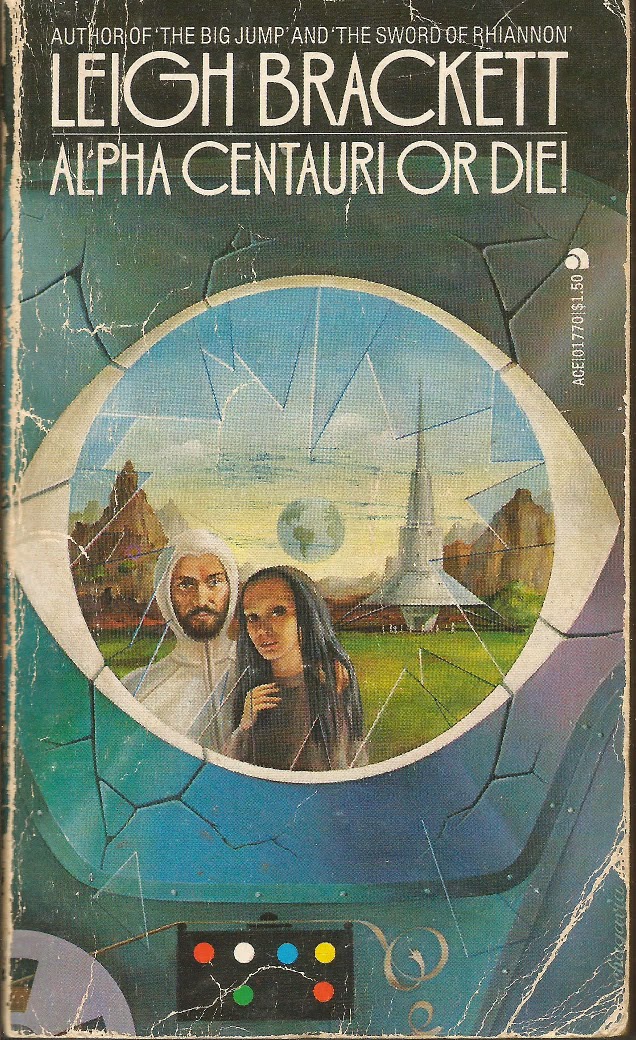 Here we have another of the fruits of my harvest of the used bookstore in Creston, Iowa, a copy of the 1976 Ace paperback of Leigh Brackett's 1963 novel Alpha Centauri or Die!, Ace 01770.  I can't say I like the cover illustration very much, but I love the title font, with the tall narrow vertical letters and the over-sized, perfectly circular round letters.  Where do I find out the name of this font so I can use it on my resume, last will and testament, rental agreements and all important correspondence?

My copy of Alpha Centauri or Die! was previously owned by a Dennis Kragel, who inscribed his name on the book in at least four places.  As well as Mr. Kragel's name, on the very first page of the book we see an odd ink stamp, showing a happy child and the letter "A."  I want to believe that Mr. Kragel had a vast science fiction library and had a set of stamps, A, B, C, D and F, that he used to record a grade for each book.  Or maybe Mr. Kragel had a teacher at school who awarded "A" students with paperback books?  Awesome!

So, I already love the hell out of this book as a physical artifact.  But is it worth reading?

Yes!  Alpha Centauri or Die! is a fun adventure story that makes you say, "Of course George Lucas wanted this chick to write a Star Wars movie!"  People are shooting, space ships are exploding, a boarding party breaks into a robot ship that is about to launch a nuclear missile at the defenseless vessel their families are in, a woman is using her telepathic powers, aliens are using their teleportation powers.  (My spell check wants to read a story about aliens using their deportation powers.) 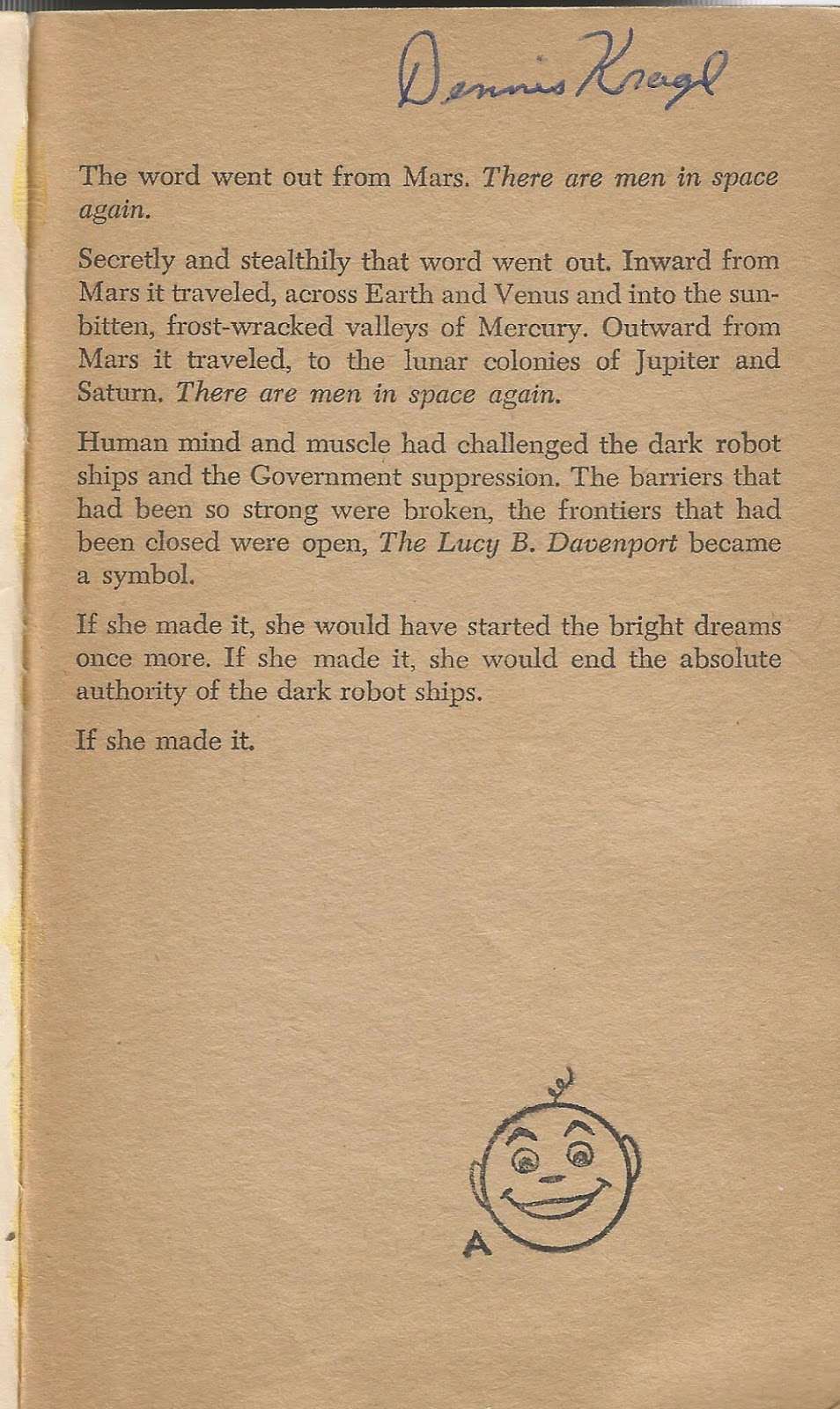 Alpha Centauri or Die! is also a rhetorical attack on burdensome government regulations that trade liberty for security, that eliminate risk and instability but also stifle the human spirit and human progress.  Mankind has explored and settled the solar system, and is on the brink of developing a means of exploring interstellar space, when the voters, tired of the boom and bust economic cycle and of interstellar warfare, put the government in charge of the economy.  Now all production and all population is subject to government planning, it is illegal to own a firearm, the government tells you where you are allowed to live, and people aren't allowed to travel through space.  If the government thinks a person or goods should travel from one planet to another, it is done by a robot space ship under government control.  Friedrich Hayek, where are you when we need you?

Our hero is Kirby, who spent his early career in space before all the "Stabilization Acts" were passed.  Kirby is an Earthman living on Mars with his second wife, a Martian woman, Shari, who has telepathic powers.  You can believe those telepathic powers come in handy when Kirby is trying to escape the authorities.  The authorities are after him because Kirby and his buddies still dream of sailing the void, and they have been refurbishing an illegal starship in a secluded part of the Martian desert! 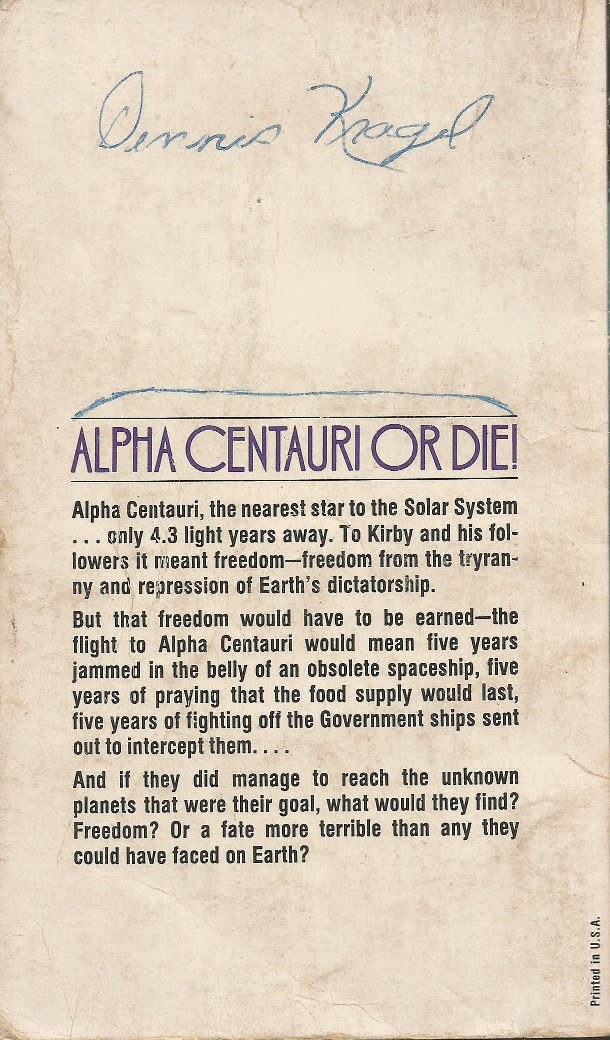 Employing their illegally owned firearms, Kirby, Shari, and comrades fight their way off Mars in their illegal ship and head for Alpha Centauri.  Many of the men have brought their wives along, and these women aren't thrilled to learn that it will take five years to reach Alpha Centauri.  Some of them want to go back to Mars - they were perfectly happy living under the cradle-to-grave welfare state!  In Trader to the Stars Poul Anderson took the line that most people aren't really committed to freedom and independence, that most people are willing, or eager, to be coddled and sheltered by the government, and Brackett seems to be taking the same line here, but with an added gender element.  More than once she suggests that it is men far more than women who are keen on taking risks and going on adventures, and so chafe under government restrictions.  Kirby himself has several crises of conscience over the course of the book - was he right to lead these people into danger in the name of freedom, is he just a selfish fanatic who refuses to admit when he is wrong?

The final third of the 147 page book takes place on a planet in the Alpha Centauri system, where Kirby and company meet benevolent aliens who help protect them from pursuing government drone ships.  These aliens do have a deus ex machina element to them (how else will Kirby fight off a space navy which has the resources of the entire solar system at its disposal?) but Brackett also seems to be presenting these aliens as a foil for humankind.  The Alpha Centaurans are super-powerful but also absolutely unambitious and even decadent, and Kirby suggests that the human race, because it has to work for its achievements, has actually been dealt a better hand by fate.

I can't resist the temptation to compare Alpha Centauri or Die! with James Blish's And All the Stars a Stage, which I read just a few days ago.  Both novels are about people who leave behind a socialistic society to be the first of their race to explore the stars, and both vocally espouse traditional ideas about gender roles.  Blish's book is probably more "ambitious" and "sciencefictiony" with its science and economics lectures and its speculations about the origins of Earth religious myths.  But Brackett's book is better written when it comes to pacing and characters.  And All the Stars a Stage feels cold and slow, and pessimistic, while Alpha Centauri or Die! is quick and passionate, and optimistic about humanity's ability to accomplish great things.  (Brackett's optimism is a mature one that doesn't pretend change, progress, and adventure doesn't entail sacrifice and risk.)  Brackett also tries to portray love relationships, between Kirby and Shari, between the other adventurous men and their (perhaps not so adventurous) wives, between the mothers and their children, and even between the telepathic Shari and the Alpha Centaurans.  I remember the human relationships in Blish's And All the Stars a Stage being uninteresting or actually demeaning.

Alpha Centauri or Die! is a good adventure story, a solid piece of entertainment I'm happy to recommend to SF fans.
Posted by MPorcius at 12:01 AM