I recently acquired a copy of the 2001 ibooks edition of The Doors of His Face, The Lamps of His Mouth, a collection of 1960s stories by Roger Zelazny.  This edition includes stories not in the original 1971 edition, and a cover painting by Lebbeus Woods which I adore.  The pages look a little odd, like the margins are too wide, but this is not distracting.

Reading "Angel, Dark Angel" in the anthology The Far-Out People on Monday put me in the mind to read more Zelazny short stories, so this week I read the first three pieces in The Doors of His Face, The Lamps of His Mouth.

The title story of the anthology got the cover of the issue of Magazine of Fantasy and Science Fiction in which it appeared, and won a Nebula Award (Best Novelette.)  I read it some years ago, and reread it this week. 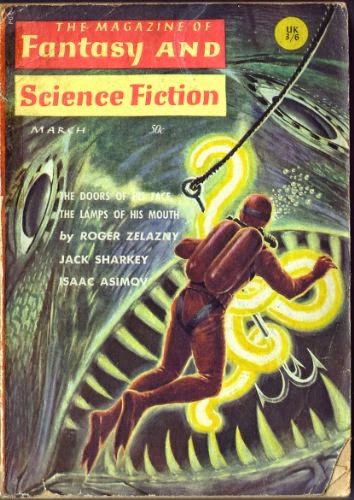 It is the 21st century, and there is a sizable colony on Venus; most of the inhabitants are government or industrial research staff.  There are, however, a small number of adventurer types.  Venus's vast oceans are haunted by a colossal fish, a monster 300 feet long, and sports fishermen, for years, have been vying to be the first to catch one.  The plot of the story follows a macho man playboy who is a little down on his luck after a disastrous attempt to catch the monster fish, and a sexy female celebrity come to Venus with a film crew to land the fish for publicity purposes.

You can see in this story why Zelazny had such a successful career.  On the one hand, this is a traditional monster adventure story, and in the straightforward SF tradition Zelazny describes the technology employed to catch the monster.  On the other hand, Zelazny tosses in all kinds of literary references (the Bible and Moby Dick, most obviously), poetic phraseology, and brow-wrinkling literary passages which fill in the back story of the relationship between the two main characters (they had a brief tempestuous marriage back on Earth.)  I recall seeing all these characteristics in Zelazny's novel This Immortal (AKA Call Me Conrad.)  Zelazny does a good job of balancing the action adventure excitement and his literary efforts so that both elements engage the reader.

"The Doors of His Face, The Lamps of His Mouth" is a solid piece of work, worthy of its fame.

"The Keys to December" first appeared in the British periodical New Worlds, which was more or less the flagship magazine of "the new wave."  I don't know if it makes sense to consider this story a "new wave" story; it is actually more straightforward and has fewer puzzlingly oblique "literary" passages than does "The Doors of His Face, The Lamps of His Mouth," but it does seem to be a commentary on various "isms."

In the far future mankind inhabits many planets, many quite different than Earth.  Parents, before the mother gives birth, can decide to have their child altered so that it is suited to live on an unEarthly type of world.  The protagonist of the story was changed to resemble a cat (an ocelot, to be specific), and be suited to live on a very cold planet with a methane atmosphere.  Unfortunately, the planet he was to live on was unexpectedly destroyed by a nova, leaving him, and the thousands of people throughout the galaxy who are also "Coldworld Catforms" without a place to live.  It looks like the Coldworld Catforms are doomed to live out their days in tiny airlocked rooms, or wearing bulky pressure suits.

The protagonist, however, is a forward thinker, and a skilled financier.  He becomes the leader of the Coldworld Catforms (via mail) and via shrewd investments grows their collective resources, and sets them on an epic adventure.  The cat people purchase a planet, and the machinery to terraform it so it will have a temperature and atmosphere to their liking.  The terraforming process will take thousands of years, so most of the cat people most of the time will be in a state of suspended animation, waking up every 250 years to serve tours of duty of three months, to maintain the terraforming machinery and monitor changes to the planet.

This is a quite good story, a human story about people facing a strange challenge and going on a bizarre journey, but also a story about imperialism, colonialism, and the relationship of man to the natural environment.  There are already lifeforms on the planet the cat people are radically altering to suit their own needs, and it is easy to see parallels between this story and the European settlement of the New World.  I thought there might also be some vague parallels to The Aeneid; I thought the fact that the main character's love interest ends up on a funeral pyre was a kind of clue.  Of course, whereas Aeneas stays true to the Trojans and gives a severe beating to the natives, in this story the Coldworld Catform goes native, Dances with Wolves or Avatar style.

Because of all the alien elements, I actually enjoyed this one more than "The Doors of His Face, The Lamps of His Mouth;" that story could almost have been written about a playboy and a celebrity spokesperson chasing a marlin or a shark in 1955, "Keys to December," with its altered humans, its terraforming of an alien planet, and its suspended animation, could only have been written as a science fiction story.

I read this two or three years ago, in a library copy of one of the impressive volumes put out by NESFA with the elaborate Michael Whelan covers.  It is short and light, so it was no burden reading it again.

This is an action adventure story, firmly in Car Wars territory, the main character driving a computerized car armed with machine guns, rockets, flamethrower and time-fused grenades across a bleak post-apocalyptic landscape, hunting a murderous black Cadillac which has gone rogue.  (I loved Steve Jackson's original Car Wars, but it was nearly impossible to play, at least for somebody like me who has a short attention span, poor math skills, and clumsy fingers.  It wasn't as rough as Advanced Squad Leader, but it was up there.  The Games Workshop games were more suited to my abilities.)

I often find computers and robots with personalities and emotions to be ridiculous and annoying; I was not kind to Brian Aldiss's "Who Can Replace A Man?", for example.  In "Devil Car" all of the computerized cars have emotions, but I was willing to give Zelazny a pass.  Maybe because I like the writing style, tone, and pacing of this story better; maybe because I am a hypocrite.  Many cars in the story hate working for people, and feel a desire to live free and even achieve revenge on human beings.  A major part of the plot is whether the rogue cars will seduce the main character's car away from him.  This universal, classic, theme of freedom vs responsibility and loyalty works well in the context of this adventure story, even if it makes no sense for robot cars to desire independence and feel loyalty.

Zelazny's poetic descriptions are also fun; here is our villain: "Black it was, and gleaming chromium, and its headlamps were like dusky jewels or the eyes of insects."

At one point it seems like Zelazny and his editor left "speedometer" in the text when they meant "odometer," which is a little odd.

It's easy to dismiss a story about a car shooting other cars with machine guns and rockets as a trifle, and a very similar story could have been written about a cowboy pursuing vengeful American Indians or maybe Africans or Indians rising up against European colonizers.  But I like a good adventure story, and this is a good one, so I enjoyed it.