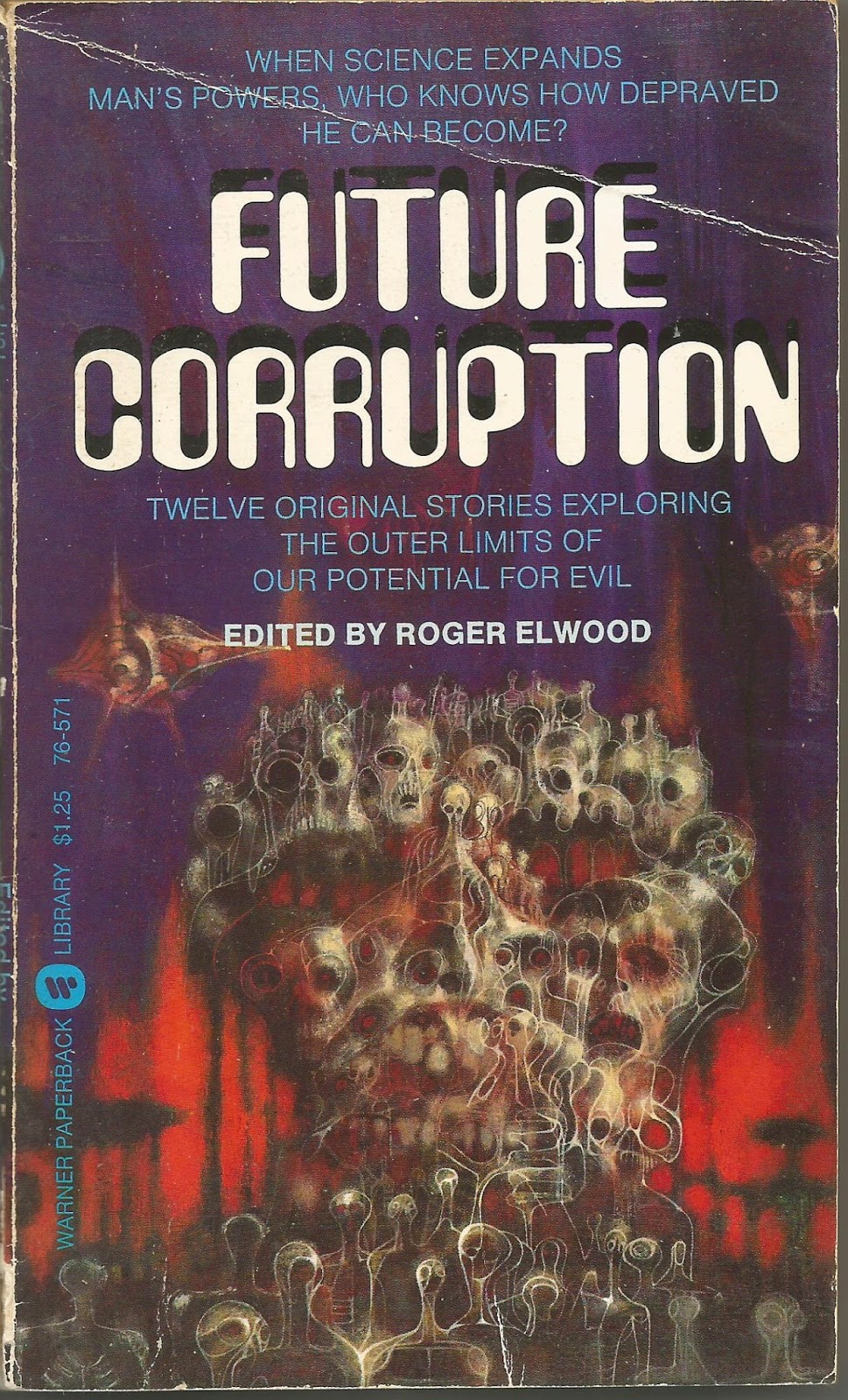 The world is full of evil, I think we can all agree about that!  (What we can't agree on is exactly who or what is evil; one man's courageous freedom fighter is another man's murderous terrorist, after all.)  If the world is full of evil today, what can we expect to see in the future?  Greater evil? Different evil?  Let's get our pessimism on (the kids still talk that way, right?) with Roger Elwood and a bunch of scribblers the people in the advertising department call "science fiction's top writers" and indulge in some literary speculations about Future Corruption.

Future Corruption, unleashed on the public in 1975, has a gloomy Richard Powers cover (gorgeous reds and purples) that reminds me of Abraham Bosses's famous frontispiece to Hobbes' Leviathan, and text on the back cover that is meant to invoke Anthony's funeral oration from Julius Caesar.  All the stories are new to this collection.  All this is giving me a good vibe.

For fun, let's rate these stories not merely on whether they are entertaining or show literary merit, like we always do, but also on to what extent they further the supposed mission of the anthology, and on the magnitude of the evils they depict.

I recently read Lupoff's novel Sandworld and gave it a mixed review.  "Saltzman's Madness" is actually a decent horror story, but I'm not sure it really belongs in a book that aims to "explore the outer limits of our potential for evil" or "speculate on the spread of corruption" in the future.

This is a longish (over 30 pages), rambling story with quite a few characters. Basically, Saltzman is one of the lead computer programmers at a software firm that makes operating systems.  Saltzman hates wasting time, is in fact with obsessed with using time wisely.  He hates to sleep, he insists on working on documents while riding in the car, and so forth.  One night in the bathroom (!) he has a sort of epiphany, and becomes convinced that there is a lot of time out there that we don't experience, that each minute is actually something like 100 seconds long, and each hour 100 minutes long, but beings from another dimension are using those extra 40 seconds and minutes.

Saltzman talks to a scientist who is doing research on tachyons, and to the office beatnik who talks about how marijuana, LSD and "speed" effect one's "time sense." Finally, Saltzman comes up with the idea that if he listens to Josef Rheinberger's "Organ Concerto in G Minor" through headphones, with the orchestral track and the organ track moving at different speeds, maybe he will be able to access all that extra time that is out there.

(I listened to the rendition of the Concerto at the link above while I wrote this, and have to admit I found it too high pitched; all those high notes pained my poor ears. Maybe the speakers on my laptop are to blame?)

H. P. Lovecraft-style, this experiment drives Saltzman insane and almost summons malevolent monsters to our universe from another dimension--or maybe not almost; could Saltzman's insanity in fact be possession by an alien creature?

Also Lovecraft-style, we know from the first page that Saltzman is in a government funny farm with some kind of multiple personality disorder; the story is almost entirely a flashback.

I enjoyed the story, but if someone complained that it was padded with overly long lectures on Einsteinian time-space theory and illegal drugs, and discussions of computer programming and high end hi-fi equipment, I would be hard pressed to disagree.

So, a thumbs up for "Saltzman's Madness," but a very low reading on the evilometer. 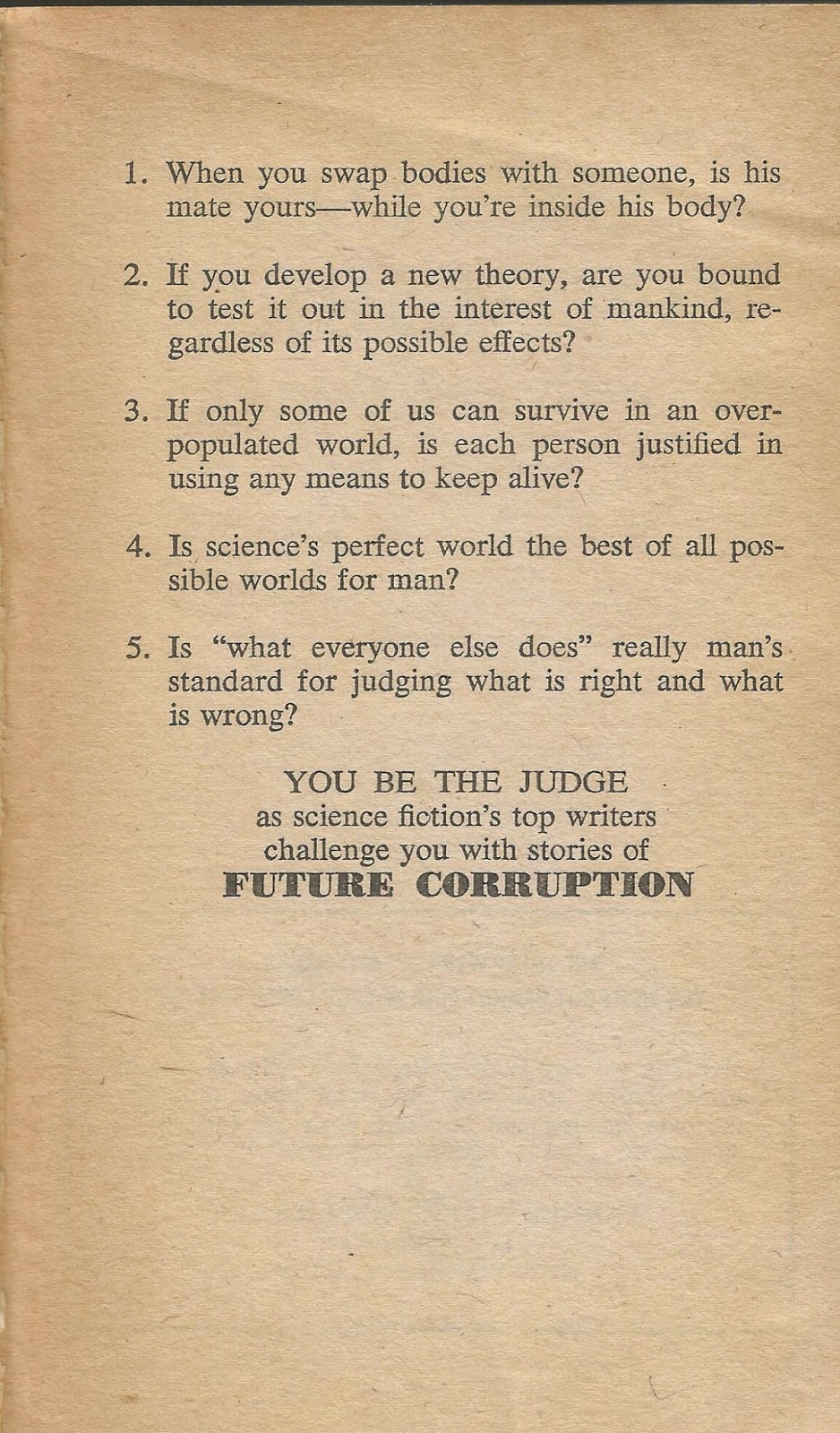 Gloeckner has only four entries on isfdb, all for short stories published in the first half of the 1970s.  Googling around suggests that there is a Carolyn Gloeckner who writes biographies of sports figures and adaptations of popular classics for kids, but I don't know if this the same individual.  "Andrew," apparently, is her last published SF story.

"Andrew" reminded me of Thomas Mann's Death in Venice as well as episodes from Casanova's memoirs.

A black hole flies through the Solar System, destroying all the planets and exterminating the human race.  Just in time, a space ship leaves Earth with less than 2,000 survivors. The captain of the ship is a homosexual, and the twenty page story is about how he uses his position as captain to seduce a beautiful boy ("His face was childishly rounded, but his features were those of a Greek bust-- classic, symmetrical, elegantly defined.") The boy moves from his family's spartan cubicle where they eat protein bars every day and into the captain's richly appointed quarters where he can drink booze and eat gourmet food.  The captain fears that Andrew Garland's parents will object, but when they come to see him they just extort some extra rations out of him--they have essentially sold their son to the captain for use as a sex toy.

Before moving in with the captain, Andrew was recognized as one of the smartest pupils in the ship, and everyone expected him to become a high officer, even captain. However, access to alcohol and drugs absolutely corrupted him, and he abandoned his studies.  Years later the captain realizes the selfish thing he has done, turning a promising young man, who could have had an exciting and productive career and done a great service to humanity as a leader in the ship, into a parasite.

This is a quite good story.  All the human relations stuff is good, and all the SF stuff is good, and the story and all its scenes are just the correct length--Gloeckner conveys emotion and presents us a clear picture of life in the ship with the minimum amount of verbiage.  And "Andrew" is actually about what this anthology is supposed to be about: corruption.  The captain is corrupted by power and lust, Andrew's parents by poverty and greed, and Andrew by temptation.  In a situation in which the entire human race is reduced to fewer than 2,000 people, all these characters, instead of doing their duty to a fragile society, selfishly pursue their animal desires.


"Prelude to a Symphony of Unborn Shouts" by Stephen Goldin

Recently I read a very short story by Goldin and thought it pretty good.  Years ago I read one of Goldin's novels, A World Called Solitude, and also liked it.

One of the reasons I liked the Goldin short short referred to above is that it had characters, plot and emotion.  Unfortunately, "Prelude to a Symphony of Unborn Shouts" has none of these.  It is one of those stories (six pages long, in this case) which consists entirely of newspaper clippings and quotes from fictional pundits.

The topic Goldin is addressing here is overpopulation.  (I guess he thinks it is evil to have children?Or more children than he has had?)  Set in the 1990s, the newspaper clippings describe how governments react to an overpopulation crisis by encouraging people to use contraceptives and have abortions.  Religious people resist these moves. The story is supposed to be funny (I think), and includes banal jokes from a fictional comedian.  Here's one of the jokes:


"You know, if they really wanted birth control, they'd simply outlaw aspirin.  Then the girls could have as many headaches as they wanted."

The clippings about religion paint the religious as violent goofballs, and the final clipping is about food riots that (presumably) resulted due to overpopulation, so it is clear where Goldin's sympathies lie.  Maybe this story will appeal to militant atheists and people who are really worried about overpopulation.  I'm a laid back atheist and I'm not worried about overpopulation, and the story is not interesting or amusing or persuasive, so I thought it was quite lame. 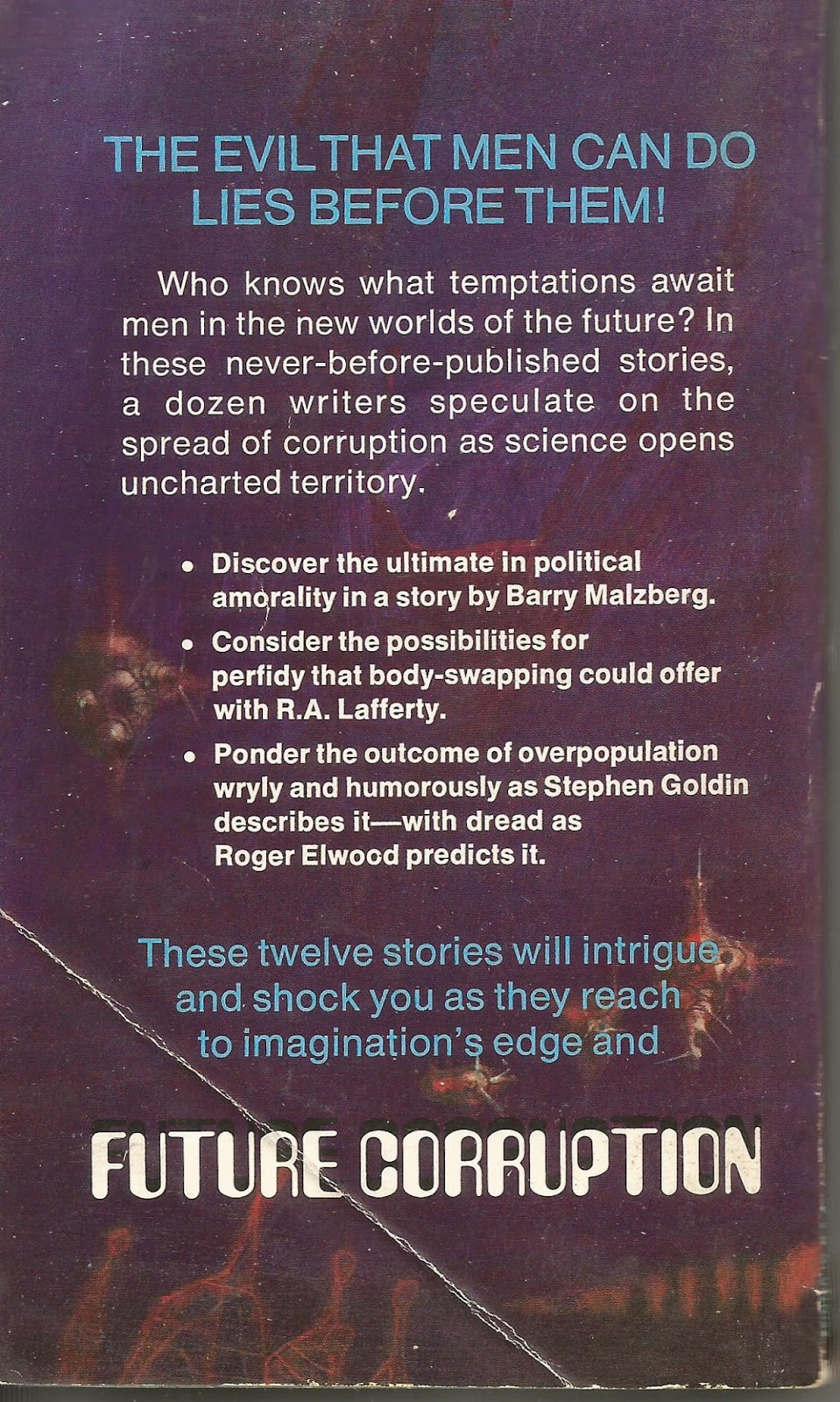 I've read a sizable amount of Lafferty stories since I started this here blog, and for the most part I have found his stories amusing and thought-provoking.  It will be poetic justice if, after dedicated atheist Goldin laid that clunker on us, committed Catholic Lafferty can deliver the comedy goods.

Lafferty does not disappoint; "Heart Grow Fonder" is fun and entertaining and is all about temptation and the evils of deceitfulness, marital infidelity, thievery, and trying to be something (and someone) you are not.

Simon Radert is happily married and enjoys his work (apparently he is some kind of accountant or finance expert--Lafferty calls him a "paper pusher" and assures us he is well remunerated.)  When some swingers, the Swags, move in next door Radert is initially hostile to them, calling them "creeps," but it is not long before he is coveting sexy Mrs. Swag.

We learn that Mr. Swag has the ability to swap minds and bodies with people, and he shifts his own consciousness into Radert's body for an hour at midday so he can have sex with Radert's wife.  Mrs. Radert, at least initially thinking this is her own husband expressing renewed interest in her, is thrilled.  Swag starts doing this every day at noon like clockwork, and Radert, in Swag's body during these periods, succumbs to temptation and starts having sex every noon hour with Swag's wife.  (Swag's wife is aware another man is inhabiting her husband's body and responds with enthusiasm; she has many such liaisons every day!)

Radert not only succumbs to the temptation to betray his wife and marriage.  Being in Swag's body provides him access to Swag's bank accounts and financial papers, and Radert begins shifting money from Swag's accounts to his own (as well as engaging in far more complex swindles.)  Before the story is over Radert is even plotting Swag's murder.

Notable about the story is that Lafferty does not follow the paradigm set out by the text on the cover of the paperback, that the stories be about the future and science. (To be fair, in his introduction to the volume, editor Elwood does not lay out these "rules," and perhaps they were concocted just for marketing purposes after the stories were compiled.)  This story is not about science or the future.  Lafferty specifically informs us that the body switching as depicted in the story is not scientifically possible, and attributes it to supernatural means, mentioning the devil repeatedly, and implying that Radert is bound for hell thanks to his sins.  Lafferty also argues, as we might expect a religious person to, that there are more ways to look at the world than the "scientific" way, and suggests that scientists are as susceptible to bias and error as anybody.

The Goldin piece was poor, but it was short.  I enjoyed the Lupoff story, and the Gloeckner and Lafferty stories were even better and addressed issues of temptation and corruption in an emotionally affecting and intellectually engaging way.  So far I'm really enjoying Elwood's anthology.

In our next episode, more corruption, this time with our old friends J. J. Russ, Bill Pronzini, and Barry Malzberg.
Posted by MPorcius at 10:38 PM