Let's continue our exploration of evil and corruption with Roger Elwood and "science fiction's top writers."  As in our first episode, we'll judge these stories from 1975's Future Corruption based on whether they are successful as entertainment and/or literature, and take a reading on the evilometer, assessing whether they have anything interesting to say about corruption and evil, and the magnitude of the evil they depict. 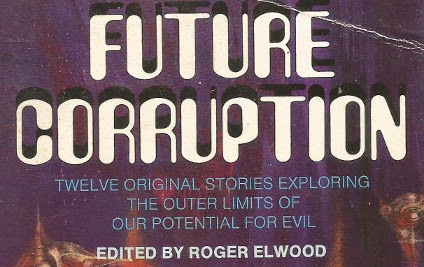 Just a few weeks ago I read J. J. Russ’s short story “Interview” and I thought it was OK.  Like “Interview,” “Aurelia” is a sort of grim joke.

The story takes place in the first two decades of the 21st century. Back in the 1980s the development of a contraceptive virus went awry, creating a plague that killed almost all the women on the Earth. Most men have turned to homosexuality for comfort and sexual satisfaction, but some live lives of lonely celibacy.  One such confirmed heterosexual is our narrator.

Perhaps the only woman left alive is Aurelia, the object of our narrator's obsession. Under the auspices of the National Parks Service, Aurelia performs a striptease several times a day. Seeing as she has a monopoly on the "female sex worker" sector of the economy, she is very popular, and her millions of fans have to make reservations years ahead of time to see her show. Our narrator sees her every three years or so.

Most of the story takes place at the National Monument that serves as Aurelia’s strip club. Russ describes Aurelia’s dance in detail, at a show at the end of the 2000s, and then one in 2011. While in line waiting for the 2011 show an aggressive “transvest” tries to seduce our narrator. When the transvest refuses to take no for an answer and starts groping the narrator, the protagonist punches his harasser.  The transvest then disrupts the show.  In the confusion Aurelia is revealed to be a robot: there are no women left in the world after all! The punchline of the story is when our narrator gets a look at Aurelia’s crotch, and finds an embossed plug which reads “Disney Enterprises.”

(It is always interesting to be reminded of how much counter culture types hate Walt Disney, though I think the Disney joke here pushes the story too far into outlandish farce territory.)

In the last lines of the story we learn that our narrator, after learning the truth about Aurelia, has succumbed to 21st century sexual mores and is now living with a boyfriend.

“Aurelia” isn't a great story, but I'd judge it acceptable as an entertainment.  I’m not sure Russ here successfully addresses the issue of corruption and evil; in his introduction to the anthology, Elwood tells us that “Aurelia” "hits the exploitation of sex--commercialization of a private act to a point of true obscenity," but I'm not buying it.  Is paying to watch a robot stripper worse than paying to see a real woman strip?  Does Elwood think all strip clubs are truly obscene exploitations of sex?  Is paying to watch a robot stripper really morally different than paying to see an attractive woman on a movie screen?  Does Elwood think the careers of Marilyn Monroe, Sophia Loren and Elizabeth Taylor are truly obscene exploitations of sex? And who is being exploited in these situations, the women or the men, and who is exploiting them? 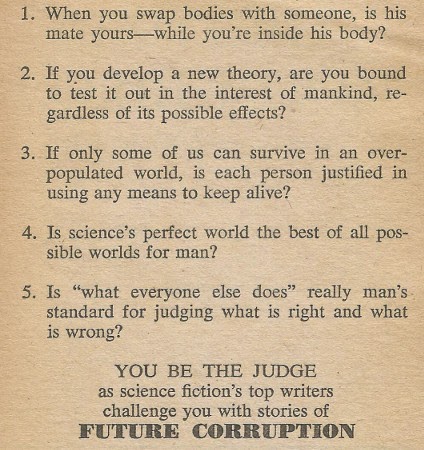 “On the Campaign Trail” by Barry Malzberg

Malzberg's fans know he is very interested in the JFK murder and presidents and political assassinations in general, and includes these elements in many of his stories. This story, a mere four and a half pages, consists of eight numbered paragraphs, each an entry in the journal or diary of the head of security of a politician’s national election campaign. Most of the text concerns attempts to murder the candidate, but the narrator also takes time to mention aspects of his not quite fulfilling love affair and to unleash some metaphors on the reader (“…when I replaced the receiver it was damp with little beads of sweat and saliva that clung to it like aphids.”)

I guess Malzberg is trying to paint a picture of a world gripped by paranoia and political violence, and in that he succeeds. Radicals and insane people are one source of the violence, but establishment institutions, like the police and the political parties, are also capable of political violence. The narrator writes in a cold and clinical style, perhaps to emphasize how “normal” political violence has become, and to suggest that people working for a political campaign are selfish cynics, their apparent dedication to the ideals they espouse just a pose. The description of the narrator's sordid and unfulfilling sexual relationship adds to the bleak picture of a world that has either degenerated, or, has simply stopped bothering to conceal the sad reality behind love and politics.

“On the Campaign Trail”    Is it good?: It's OK.    Evilometer reading: Moderately high.

Malzberg sometimes manages to sell multiple stories to these anthologies by writing some of them under pseudonyms. (Malzberg has three stories in Future City, for example.  Future City was also edited by Elwood, and I sometimes suspect Malzberg gets multiple stories in these things because his friends are trying to shore up his finances.) There is a tradition of this kind of chicanery in science fiction; two of Robert Heinlein's more famous short stories, "Universe" and "Solution Unsatisfactory," both appear in the May 1941 issue of Astounding, the latter under the pen name "Anson MacDonald."

“Streaking” stars a spirit creature (or alien or something?) that can change its appearance and is able to predict the future.  (For the third time today we have a first person narrator.)  This being interviews college students who have run naked across the campus as a stunt; the creature is curious as to why the students are streaking. The being seems disappointed that the students would do something frivolous and pointless instead of committing violence in the name of justice: “’But three years ago you were rioting,’ I say, ‘you were burning the campus as a symbol of injustice and repression. Why this now?’”

The second half of this six page story is about the being’s interaction with a college chaplain. The chaplain gives a sermon on how the streaking is wrong, and the narrator takes the form of a laughing naked man and runs hither and yon through the chapel before vanishing. I don’t know if this is supposed to show how effective a means of epater la bourgeoisie streaking is, or how pointless it is; is the creature embracing the practice of streaking, or mocking it?

I'm not finding “Streaking”'s examination of corruption very persuasive. Is Malzberg suggesting that it is corrupt for the students to be doing something goofy and harmless like streaking instead of something destructive and violent like arson or rioting?  Is he suggesting that streaking is a sign of a lack of idealism?  To my mind such idealism was always a myth; protesters and revolutionaries talk about idealism, but their actions are in the pursuit of selfish psychological or material ends, they do what they do because it is fun to “get in the face” of people you resent and to steal or wreck their things, and/or because they are trying to seize power, privileges and wealth, or protect power, privileges and wealth they already have.  Streaking and burning down the campus have the same source and purpose--they are fun ways for young people to thumb their noses at the establishment (an establishment most 1960s and 1970s students were themselves already, or soon would be, a part of.)

In the same way I didn't get the "commercialization of sex" ideology of "Aurelia," I don't get the "you should burn down the campus" ideology of "Streaking."  And there is not much else to the story, so I'm going to have to give a thumbs down to this one.

Bill Pronzini, oft-times collaborator with Malzberg, hasn't exactly been winning accolades on this here blog, but maybe I’ll like this one?

Paxton lives in the 22nd century; he is a rich man because his father was a pioneer in robot development.  Paxton, however, hates science and technology: "He thought Science was a curse rather than a servant of mankind; he thought it was the direct cause of depersonalization and dehumanization, and that it was responsible for the death of individual freedom."

So, Paxton flees the Earth in a one-man space ship; over the course of the long journey he goes insane.

Paxton finds a planet where he hopes to live a life close to nature, without any science or technology.  The primitive natives worship Paxton as a god, and we see how much of a hypocrite Paxton is (or how insane the trip through space has made him) as he rules over the natives as a merciless dictator, destroying their culture and society to such an extent that they go extinct.  Paxton, the anti-science crusader, has inflicted on the aliens and this virgin planet all the evils he claimed science had foisted on the human race and Earth.  A century after Paxton's death Earth ships land on his planet and it joins all the other human colonized planets as a world dominated by science and technology.

This is the best story of the four I've read today; at least it is directly addressing the issue of evil and corruption in a way that makes some kind of sense.  Pronzini also leaves it up to the reader to decide how much to sympathize with Paxton: is the point of the story that people who complain the loudest about society are often hypocrites who would make an even worse hash of things if given the opportunity?  Or that science and technology are invincible tyrants, corrupting even the most resistant of people?

While not terrible, this batch of stories is a real let down after the first part of the book, which included the superior Lafferty and Gloeckner stories.  Lafferty and Gloeckner provided us believable characters in situations the reader can identify with, in stories that were really about corruption; today's stories are all flat fables with little or no concern for character or emotion, and three of them failed to say much interesting about evil or corruption.

Hopefully the writers represented in our final episode of Future Corruption-- Roger Elwood himself, Howard Goldsmith, Jerry Sohl and Gardner Dozois--can finish up the anthology on a high note.
Posted by MPorcius at 7:26 PM