Day of the Beasts by John E. Muller

"At the moment, I'm afraid I can't believe that these creatures come from the stars.  I believe they came from earth, but from the earth of some distant future." I purchased quite a few odd paperbacks at Rainy Day Pal, a used bookstore in Lexington, South Carolina, while on my end-of-the-year travels.  Here's one of the oddest: not only had I never heard of its author, I'd never heard of its publisher!

In 1961, British publisher Badger published Day of the Beasts by John E. Muller in hardcover.  Several paperback editions followed, including mine, which was released on some unspecified date by Modern Promotions, a division of Unisystems, Inc.  (The device on the cover says "Uni Book.")  A little googling around suggests Modern Promotions put out lots of children's books based on properties like the Flintstones, Huckleberry Hound and The Dukes of Hazzard, as well as a few SF books, romance novels, and cookbooks.

John E. Muller, it turns out, is a pseudonym used by several writers associated with Badger.  According to isfdb, the author of Day of the Beasts is John Glasby.  Back in September I read two Lovecraftian horror stories by Glasby, and wasn't very impressed by them.  (If I had known Glasby was behind this novel it would probably still be enjoying the balmy temperatures of the Palmetto State instead of shivering along with me here in the land where the tall corn grows.)  Glasby, a professional scientist, produced a high volume of genre fiction at great speed, apparently leaving himself limited time for constructing original ideas or editing and polishing his prose.

I purchased Day of the Beasts largely because of the cover painting by Jeff Jones, which suggests the book is about a naked guy who fights giant spiders.  That sounds pretty good, but does Glasby's story live up to Jones' illustration? 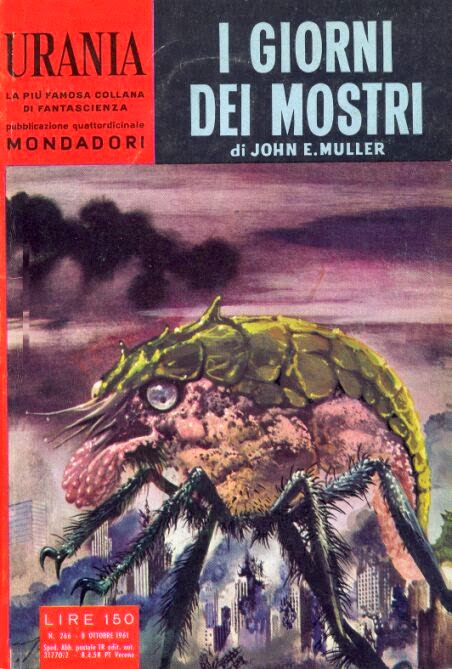 Day of the Beasts takes place in the late 1970s or early 1980s, in an alternate universe in which the Soviet Union has maintained a lead over the free world in the space race.  (The novel first appeared only four years after Sputnik and the same year as Vostok 1, so when Glasby wrote it such a turn of events must have seemed all too plausible.)  In fact, as the story begins, the commies have put men on Luna, Mars, Venus and the moons of Jupiter and Saturn, and American scientists are rushing to build an interstellar drive in hopes of beating the Soviets to Alpha Centauri.  Major Brad Norton, a physicist and astronaut as well as an Army officer, is sent by Washington to the South Western desert to report on progress of the star drive.

Just as a major test of the interstellar drive is about to take place a freak tornado appears and wrecks the prototype interstellar ship.  In the succeeding weeks giant arachnid-like monsters lay waste to New York City (egads!) and many other US cities. Do the commies have the ability to control the weather and these monsters?  Or are extraterrestrials to blame, as Major Norton theorizes?  (We SF fans are well aware that aliens are always employing dirty tricks to keep us from achieving our destiny among the stars!)

As the back cover told us even before we opened the book, we can't blame these disasters on the Bolshies (as much as we might like to.)  Major Norton, in the second half of the book, figures out that it is not merely aliens who are causing all this trouble, but aliens from the future!  Those are the worst kind!  The aliens send one of their number back in time to take over the mind of a scientist, who begins promoting the theory that the monsters are from outer space, but the Major sees through this ruse.  In a few weeks the US government builds a time machine and in the final third of the book Norton travels forward in time to sabotage the device the aliens are using to send all those monsters back to the 20th century. Day of the Beasts reminded me of those old SF movies in which the characters are all in a lab talking, and watch the aliens and monsters on a screen or read about them on teletype machines.  The characters in this novel are all bland scientists or military officers who are more spectators to the action than participants.  They find evidence of monster attacks, spot the monsters way off in the distance, arrive in New York after it has been flattened, etc.  Only in the last 40 pages of this 144 page book, when the Major travels to the future, do we get any real action.

The novel definitely feels thrown together and unrefined.  There is no style or personality to the writing, and the characters are just there, lacking personality, emotions or relationships.  There are science-fiction elements that don't seem to serve any purpose to the plot, and others which are simply not explained. Robots are prevalent, for example, but play no role in the story.  The 20th century characters call the future people "aliens," but when Major Norton goes into the future to meet them they look and act just like humans, and the giant monsters are proven to be native to the Earth.  How the future people control the weather or take over people's minds is never explained.  It is also not clear why the future people destroy the star drive and New York; there is no scene in which the future people explain their motives, and Glasby doesn't drop any clues to their ideology or belief systems.  The future people's campaign of sabotage is made even more incredible when it is explained to us that they knew they would fail.

I'm in the same position with Glasby's Day of the Beasts that I was in with Richard Lupoff's Sandworld just a few days ago.  The thing has many obvious flaws, but somehow they didn't stop me from enjoying it.  Am I getting soft in my old age?  Day of the Beasts was not good, and I don't feel like I can recommend it to people, but I was never bored and I was always curious about what would happen next.  So, a (very marginal) passing grade for Day of the Beasts.
Posted by MPorcius at 11:07 AM

Email ThisBlogThis!Share to TwitterShare to FacebookShare to Pinterest
Labels: Glasby