Sandworld by Richard A. Lupoff

"They only two places...inside and outside.  Inside is inside a fence.... Inside any jailhouse....Outside is anyplace else...." 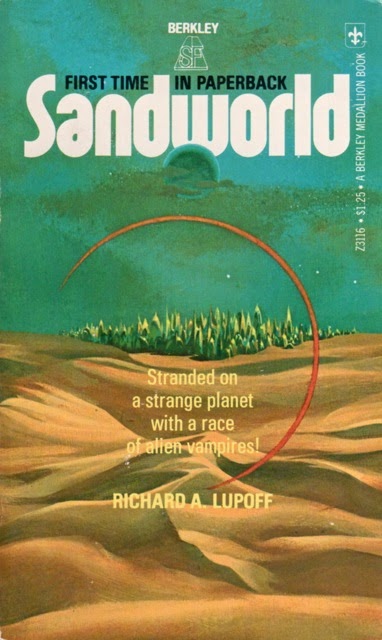 Years ago, back in New York, I borrowed from the library an old hardcover edition of Richard A. Lupoff's Edgar Rice Burroughs: Master of Adventure and read quite a bit of it.  It was exciting to find that someone was taking Burroughs seriously, and I found the book to be very interesting and entertaining.

Besides that major work of genre literature criticism, Lupoff wrote quite a few SF and mystery novels.  (One of these novels features H. P. Lovecraft, another writer Lupoff had a scholarly interest in, as a character.)  While on my holidays travels I bought one of the less well-known of Lupoff's novels, Sandworld, a 1976 paperback from Berkley, for one dollar in a used bookstore in South Carolina.

Sandworld stars Red O'Reilly, who is serving time in San Quentin.  Shackled to two other jailbirds, a tall elderly black man and a foul-mouthed young Latino, Red is put into the back of a police car for transport to the courthouse. Behind the wheel of the car is the prison guard who is to drive the felonious trio, and beside him sits a female ACLU lawyer, there to make sure the guard doesn't abuse the "cons" during transit.

In the true tradition of Edgar Rice Burroughs, while driving down the highway the police vehicle is inexplicably teleported to an alien planet where the three crooks, the prison guard and the attorney have to fight for their lives against a giant snake!  They all survive the struggle with the monstrous serpent, and then trek across a strange desert, to a cyclopean city.  In the true tradition of H. P. Lovecraft, the city is abandoned, haunted by alien monsters, and filled with reliefs which tell the story of the fall of its advanced civilization.

Contra Burroughs and Lovecraft, the aliens the Earthlings meet after solving the riddle of the city are kind and generous.  (They even explain how the humans got teleported to this crazy planet in the first place.)  In fact, in classic sense of wonder fashion, the aliens provide our heroes with the technological means to explore thousands of planets! To employ this technology, the Earth exiles need only learn to "become at one with the universe" through meditation!

Then in the last 30 pages of the book, for some reason, we're back in Weird Tales territory.  On their very first exploration trip Red and company are captured by the "degenerate" descendants of a once great race and presented to these degenerates' mysterious god. 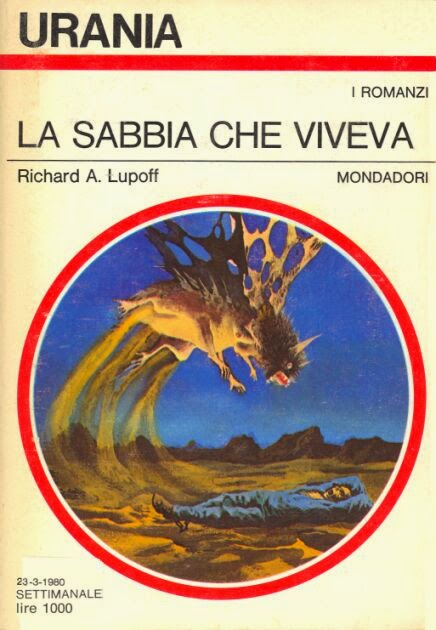 Lupoff's main focus seems to be not the book's plot, but its characters; there are many scenes of them debating what to do and squabbling with each other.  The characters, their relationships with each other, and their response to being sent to a planet full of monsters, reflect what I take to be the conventional 1970s liberal ideas held by Lupoff.  The prison guard is fat, ugly, racist, stupid and obsessed with rules and regulations.  Lupoff repeatedly uses the word "authoritarian" to describe him, and likens him to Nazis, fascists, and the alien monsters.  All the other characters enjoy multiple opportunities to humiliate him physically and verbally.  (If you want to read about an Italian-American corrections officer being beaten, shot, and insulted by a multi-ethnic crew of criminals and social justice types, this is your book!)

Our hero, Red, is a college-educated "fiery Irishman," and quickly takes command of the group.  Red somehow "parlayed a role in a campus political demonstration into an indeterminate sentence to a maximum security prison."  Red keeps the violent Hispanic, a mugger and thief who has spent eight years in prison and wants to rape the lawyer, under control.  The elderly black murderer has been in prison over 30 years, and is a "gentle giant" who plays the harmonica and, despite his bad grammar, utters pearls of wisdom.  ("God don't like us kill except we have to.")

Over the course of the story Lupoff denounces the harshness of prison life, questions the efficacy of imprisoning criminals, and questions the very idea of rules and authority.  (Of course, Red is always telling everybody what to do, which could muddle Lupoff's message a little, so we are shown time and again that Red is a reluctant leader who only takes the leadership position because the others beg him to do so.)  It is also suggested that criminals are not really to blame for their crimes--when the Latino tries to rape the lawyer she (after being rescued by Red) forgives her assailant, saying, "That was only natural."(!)

What is Sandworld trying to be?  What did Lupoff want to accomplish in writing it? On the back cover Burroughs' name is invoked and we are told this novel is a "rousing adventure in the SF pulp tradition," and it obviously owes some inspiration to Burroughs and Lovecraft.  But it doesn't really succeed as a "planetary romance" adventure or a piece of "cosmic horror." 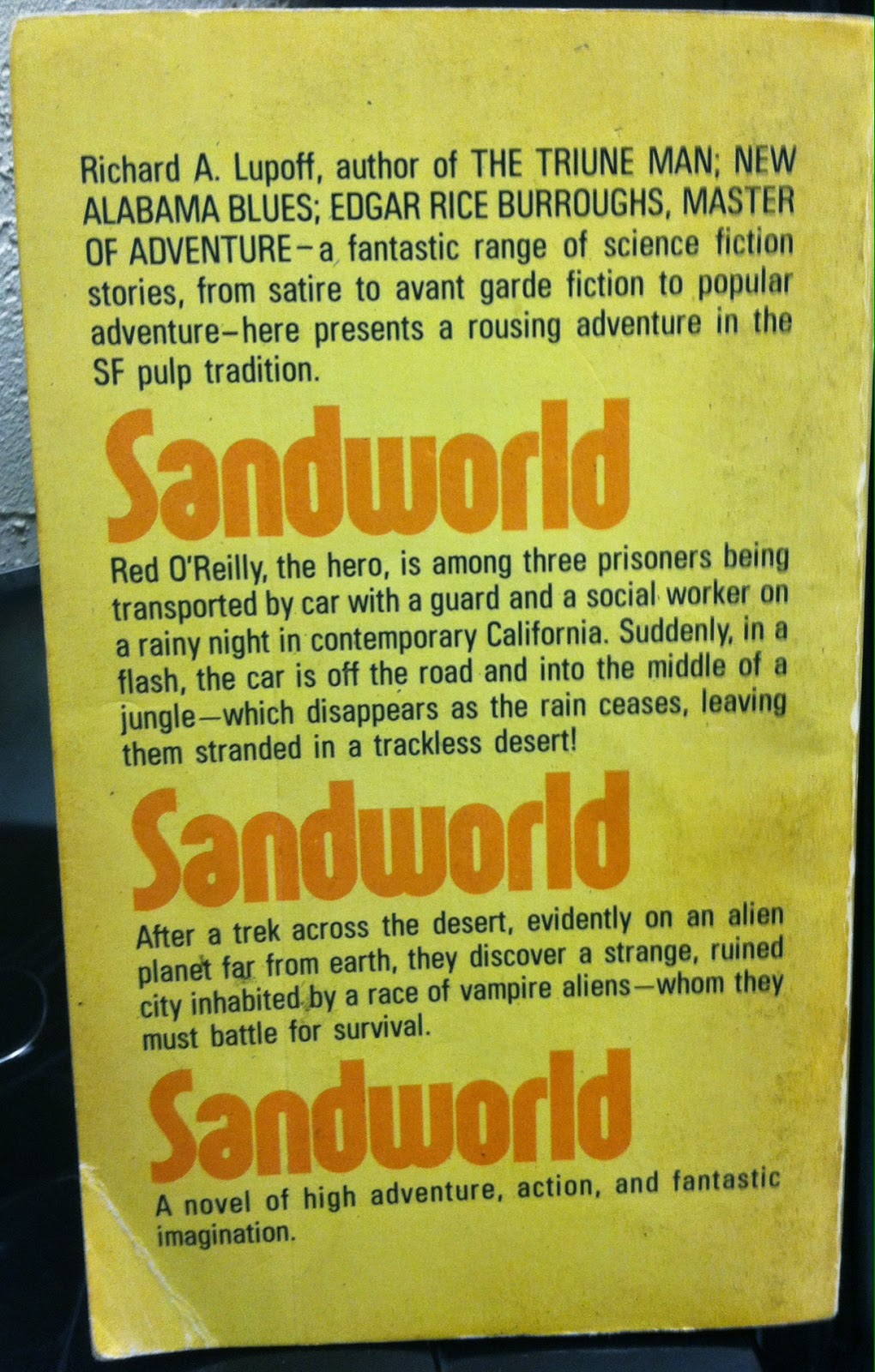 For one thing, the book's politics don't mesh with the daring-do swashbuckling of a Burroughs story or the existential cosmic horror of a Lovecraft tale.  The politics of the book are very specific to its time and place, late-20th century USA, so the novel can't emulate the sort of timeless adventure of a Burroughs tale or the universal existential cosmic horror of a Lovecraft story.  The characters are not archetypes that represent us all and our hopes and fears (the man who triumphs over challenges, or the explorer who learns some dreadful truth) but stereotypes who represent very specific real people (the minorities who are oppressed by the system and react violently, the stupid ugly white guy who does the system's dirty work, and the sexy college-educated whites who work to change the system) and Lupoff's opinion of them.

Besides the distracting focus on parochial political issues, the novel's pace is slow, even in the action scenes; Lupoff is kind of long-winded and a little repetitive.  There is also no climax to the story; the last 30 pages with the degenerates and their god feel tacked on and are poorly conceived in any case.

Seeing as Sandworld doesn't work as a pulp adventure story, I am forced to consider that it may be: a rush job done for money that Lupoff padded out with his banal political views; a half-hearted debunking or satire of pulp adventures that fails to be insightful or amusing; or, a sincere attack on criminal justice in America that Lupoff made salable to Berkley by setting it on another planet.  Or some combination of these.

Despite all my criticisms, I'm giving Sandworld a (marginally) passing grade.  I haven't talked about the original science fiction components that Lupoff brings to Sandworld, the astronomy and ecology of the planet, for example, but they are pretty good.  And I was never bored by the novel; I was always curious about what would happen next. The novel is not good, but it kept my interest.  Rather than passing "an indeterminate sentence" for "political demonstration" on Lupoff, I'll let him off with a warning this time.
Posted by MPorcius at 11:22 PM