Not long ago I read a very short story by David Bunch that appeared in the January 1974 issue of Fantastic and pronounced it horrible.  But Joachim Boaz of the SF Ruminations blog has endorsed some of Bunch's other work, so this holiday week I read three Bunch stories I found in recent additions to my SF collection.

Published by Dell in 1966, Judith Merrill's 10th Annual Edition: The Year's Best S-F is full of stories by authors I've never heard of, and by authors I don't typically think of as SF writers, like Isaac Bashevis Singer, Russell Baker, and John D. MacDonald.  (Though I have already reviewed some of MacDonald's SF right here at MPorcius Fiction Log.)  In an effort to allay the fears of the SF book buyer, on the back cover of my edition of the volume the publishers printed an assurance from The Chicago Tribune that the book is a "Jim Dandy" and "Fantasy land really comes through in this one...."

David R. Bunch's contribution to 10th Annual Edition: The Year's Best S-F, "Training Talk," is five pages long and originally appeared in Fantastic's March 1964 issue.  I guess it is some kind of allegory or something.  A single father living in the country tries to teach his four-year-old daughter and five-year-old son something (about death?) by carving up hunks of baloney into likenesses of a deceased aunt and burying them in cigar boxes along with the little girl's paper cutouts of angels.  When they dig up one of the boxes six months later they find a snake has been making the box its home.  The end.

Maybe I'm missing some kind of deep symbolism here.  Maybe "Training Talk" is a satire of the scientific method?  (A theme of the anthology as a whole, judging by Merrill's introductions and summations, seems to be skepticism of science and technology.)

Maybe I'm supposed to enjoy the folksy style, with all its similes and metaphors ("It was one of those days when cheer came out of a rubbery sky in great splotches and globs of half-snow and eased down the windowpanes like breakups of little glaciers.")?  The story is a little like an R. A. Lafferty story, but one shorn of any laughs.

Maybe I'm supposed to look for clues as to what really happened to the aunt and the kids' mother?  What city the mother may currently be residing in is a topic of conversation among the characters.

This is a thought-provoking story, but my thoughts don't seem to get me anywhere; is the story a puzzle for which I lack a key, or just absurd nonsense without any real meaning? 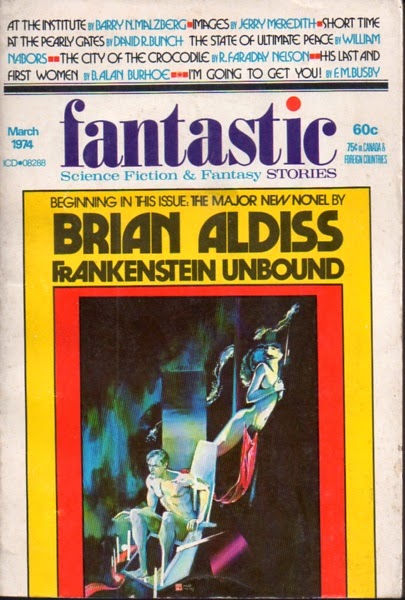 This three page tale appears in my copy of Fantastic's March 1974 issue.  In his intro, editor Ted White admits that "for some Bunch is an acquired taste."  The isfdb suggests that this was "Short Time at the Pearly Gates"'s only appearance anywhere.

A man is hit by a truck while crossing the street and awakens at the entrance to Heaven.  One of Saint Peter's subordinates plops him in a tub and scrubs away his sins with abrasive soaps and wire brushes. But just before he passes through the Pearly Gates the narrator wakes up to find himself still alive, in a hospital, confronted with his wife and children.

I guess the tension of the story is in wondering whether the man really went to Heaven or was simply dreaming, and whether we should suspect that his life on Earth, working to pay his doctor bill and feed his family, is literally or metaphorically Hell.  There are also some lame jokes (e. g., the attendant at the Pearly Gates keeps track of the oddballs who come up to Heaven, and our narrator is approximately the 485759th most absurd.)  This is some pretty thin gruel. 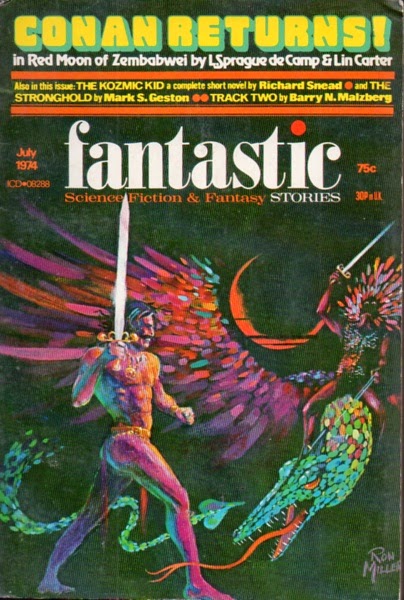 Like "Short Time at the Pearly Gates," "At Bugs Complete" appeared in Fantastic (the July 1974 issue in this case) and was never printed again.  Poor Bunch isn't even listed on the cover.

Bugs Complete is a large business firm in a dystopic world in which the government is spying on everybody all the time, and this story is mostly a conversation between an executive (our narrator) and his direct subordinate, a scientific type.  Bugs Complete sells surveillance devices to the government, and the scientist is presenting a new idea to the narrator, a system of bugs that will catalog a person's every experience from birth, thus allowing the government to extrapolate what he or she will do in the future.  Knowing what people will do before they do it, the scientist claims, will be the ultimate power!

This is easily the best of the three stories I'm discussing in this blog post.  Unlike in "Short Time at the Pearly Gates," in "At Bugs Complete" something actually happens, and there are actual relationships between the characters (we learn how the narrator manipulates the scientist to further his own career, for example.)  Now, in "Training Talk" there was also a plot and characters, but in that story everything was inexplicable and absurd; in "At Bugs Complete" you can actually understand the plot and characters--call me old-fashioned, but for me that is a plus.  "At Bugs Complete" also addresses philosophical debates I find interesting--nature vs nurture and determinism vs free will--and includes actual science-fiction elements, the proposed methods of government surveillance.  This is a story I can recommend.

So, we've got a bewildering but acceptable story, a story I thought a total waste of time, and a story that actually worked.  It's a mixed bag, to be sure, but good enough that I will read more Bunch in the future, if and when the opportunity presents itself.
Posted by MPorcius at 10:13 AM