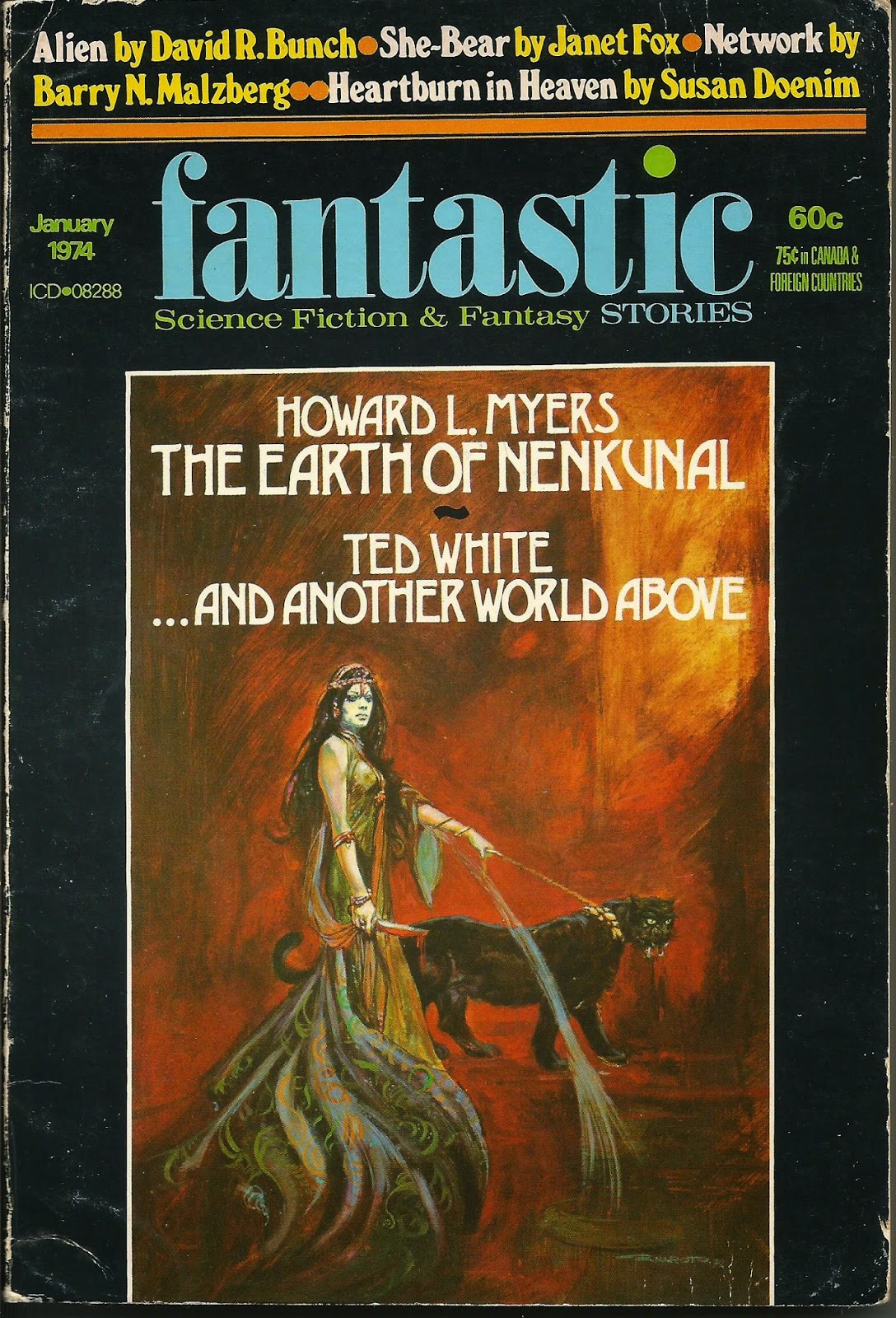 Let's tackle the rest of the fiction from my copy of January 1974's Fantastic.

"...And Another World Above" by Ted White

White, editor of the magazine, includes a longish story by himself; on the Table of Contents it is called a "novelete."  In its introduction White tells us it is the first in a series of stories about his character, "Long Hand," but I'm not finding any evidence online of further stories about the character.

Which is too bad, because "...And Another World Above" is a pretty good piece of work, a good start for a novel or a series of closely connected stories.  It doesn't really work as a stand alone tale, as it spends all its pages setting the scene and introducing the characters, so there is no conflict or climax or resolution.

Long Hand (is this name some kind of writerly in-joke?), a teenage boy, is a member of a nomadic tribe of only 22 people.  They can only barely eke out an existence in the barren desert they inhabit, and have virtually no technology--Long Hand has never even seen a wheel!  One day the band is visited by wise men who have magical (or high tech) healing abilities.  These wise men do some good deeds for the tribe, and then leave.  Long Hand, curious, follows them, and witnesses them teleporting away. Imitating their actions, the boy himself is teleported.

He reappears in a much more fertile land, one of towns, farms and rivers, and a population that wears clothes and uses wagons.  The sky is also different; White seems to be hinting that this world is on the interior of a globe or cylinder with a sun in its center, like in the generation ship in Gene Wolfe's 1990s Book of the Long Sun or Edgar Rice Burroughs' 1914-1963 Pellucidar books.  Long Hand meets an older woman who is a mind reader, and becomes her assistant.  He also meets a friendly teenage girl in a town, and loses his virginity with her.  Then the story is over.

I liked White's writing style, and the way he handled the characters was pleasant.  I think I would have enjoyed following Long Hand as he explored his new world and did whatever the plot would end up consisting of, going on a quest or fighting in a war or whatever.  Is there any chance one of White's novels is a continuation of this story?

NOTE:  There's a fun story autobiographical story by White about his relationship with Harlan Ellison available online here; check it out, it is like something Harvey Pekar would write, and even includes charming cartoons!

I'd never even heard of Janet Fox before reading this story; apparently she is most well-known for a series of novels about an alien called Scorpio who travels through time.  Those novels appeared under the pseudonym Alex McDonough.

Arcana is a "tall, sturdily-built girl" climbing snow-covered mountains on a quest to find a magic sword and kill a troll.  The sword is imbued with the bloodthirsty soul of the great king of a forgotten people, and when Arcana has to fight rapists, the sword basically fights for her, guiding her hand in intricate fencing moves.  Besides her magic sword, Arcana (who is a witch) is accompanied by a daemon trapped in the body of a blind horse, and a handsome man who is in her thrall, she having used the magic sword to outfight him and win his obedience.  A romance seems to be brewing between the two, but is not consummated within the period of the story.

While a complete story, "She-Bear" feels like an episode in a series, and I'd certainly be interested to read more about Arcana, the captive daemon, and the thrall and their Conan/Elric/Grey Mouser-style adventures.  Fox published something like 50 stories in anthologies and periodicals, so with luck I will encounter some more of her work in my usual course of scrutinizing tables of contents in libraries and used book stores.

An entertaining fantasy caper with some effective horror elements; thumbs up.

J. J. Russ only has six entries, all short stories, on the isfdb.  White tells us this is a Kafkaesque story, and that Russ is a published poet.

This is a first person narrative in which the protagonist endures a job interview in a dystopian world in which there is only one company to work for and the unemployed are "disappeared" soon after losing their positions.  Our narrator is presented with impossible challenges at the interview, like being asked to recall something from the day of his birth, or define words that the interviewer has just made up.  The story is mildly amusing, though it feels a little long and I spotted the twist ending early.

"Heartburn in Heaven" by Susan Doenim

When I looked up Doenim at the isfdb I was surprised to find that this was a pseudonym used by George Alec Effinger.  In his intro to the story Ted White reports that "Miss Doenim" recently graduated high school--in 1974 Effinger, born in 1947, was 27 years old!  Was White in on the joke, or was he the victim of an elaborate charade on Effinger's part?  Is the "affectionate dedication" to Harlan Ellison sincere, or some kind of dig?

I liked Effinger's 1973 story, "City in the Sand," but was not impressed by several of his earlier stories. "Heartburn in Heaven" isn't terrible, but I can't quite say I enjoyed it; it is a sterile literary exercise.

A man awakes naked in a long steel corridor.  He can only vaguely remember his earlier life; he doesn't even recall his own name.  On the floor are a scrubber and a can of polish.  He eventually learns that if he polishes the walls of his prison, food will appear.  Exploring, he meets other prisoners; none know any more about how they got here than he does.  The inmates cannot live communally, because their food only appears in the place where they awoke.   The female prisoners have a little more mobility, because they will have sex with men who trade them half a ration of food for the privilege.

And that's all folks, we never learn anything about how or why he is in this environment, or who put him there.  I guess this is just a (tepid) allegory of life.

All in all, this issue of Fantastic is pretty good.  White, Malzberg and Fox provide stories I can confidently recommend.  The Meyers, Russ and Effinger stories, all of them odd in one way or another, get (perhaps grudgingly) passing grades.  That leaves us only one truly bad story, the anemic Bunch piece.  And the ancillary matter--editorial, letters, the whole business of Effinger impersonating a young woman--are fun.  So, reading this magazine has been a positive experience, and opened my eyes to two authors, White and Fox, worth a further look.
Posted by MPorcius at 11:36 AM