As he worked on it Tallon felt his mind sink through the layers the years had superimposed on his personality.  A younger Sam Tallon emerged, one who had been determined to carve out a career in domain physics, until some unremembered event had diverted him into world-hopping, and then finally to the Block and all it represented. 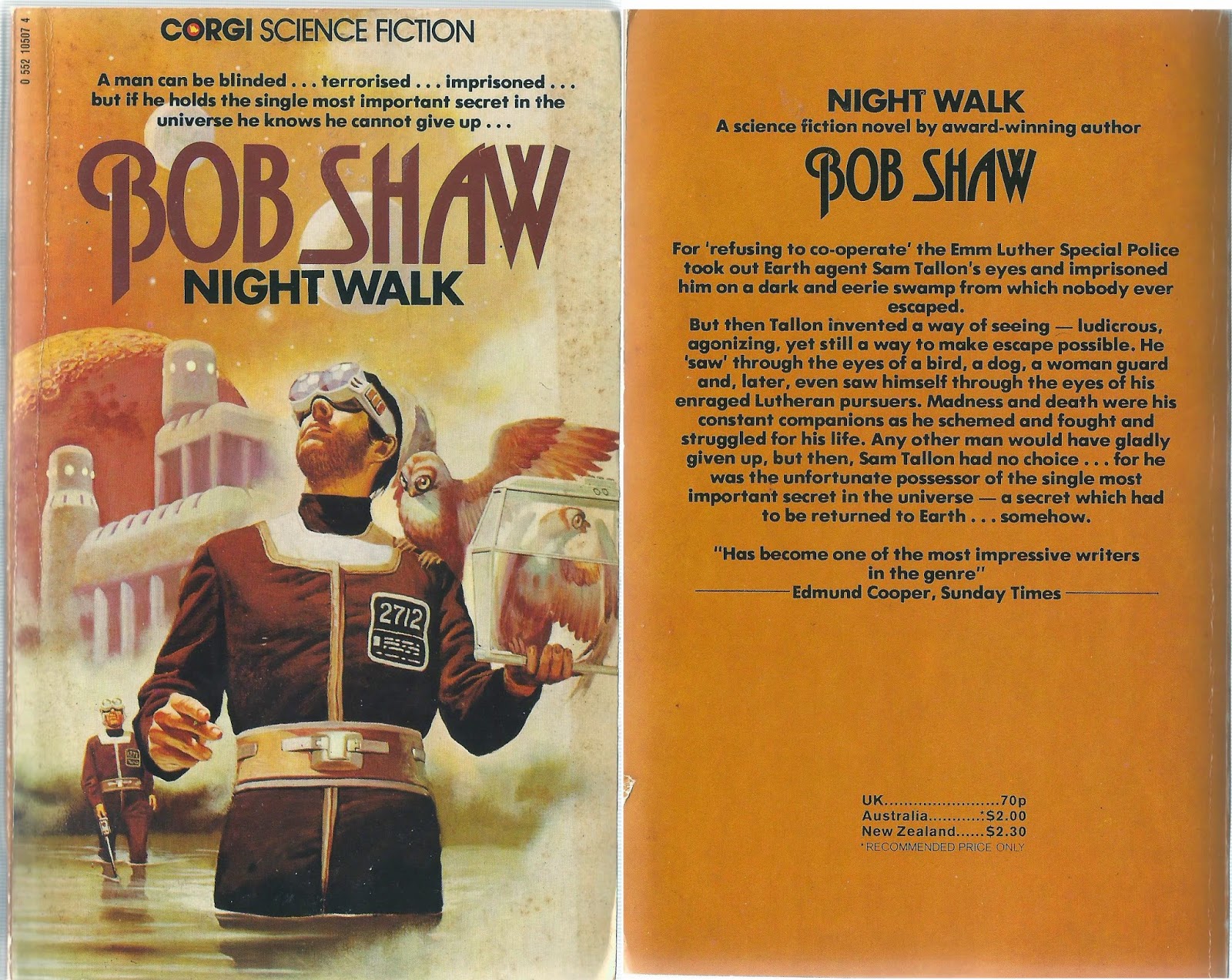 I recently enjoyed Bob Shaw's award-winning novel Orbitsville.  On the same trip on which I purchased Orbitsville I also acquired a Corgi 1977 paperback edition of Shaw's first novel, 1967's Night Walk.  I read Night Walk this weekend and am happy to report that like Orbitsville it is a literate and entertaining science-fiction adventure.

It is the 22nd century and the overcrowded Earth is always looking for new planets to colonize!  A former Earth colony, planet Emm Luther, discovers a habitable planet, but they refuse to tell the Earth where it is!  So Earth's intelligence agency, the Block, sends spy Samuel Tallon to Emm Luther, where he learns the new planet's coordinates and memorizes them, only to be caught by the local security forces.  Not only is the data erased from Tallon's conscious mind, but vengeful counterintelligence agent Cherkassky blinds him before he's sent off to prison! 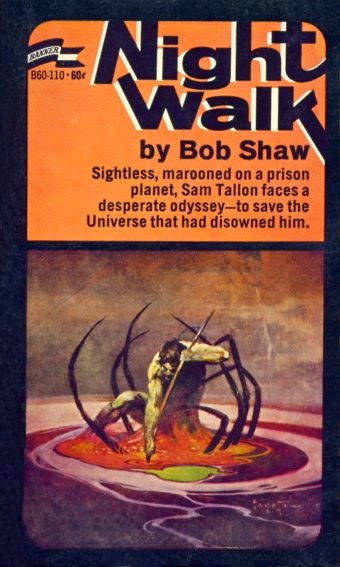 In the grand tradition of prison stories, Tallon hooks up with other mechanically-minded jailbirds and they start building devices in the prison workshop to help them escape.  In the grand tradition of science-fiction stories that celebrate the engineer, Tallon, who was a physicist before getting into the spy game, invents a device to overcome his blindness.  One of Shaw's conceits in the novel is that our neurons leak electrons, broadcasting like radios.  (At least I think it is a conceit; I don't know much medical or biological stuff.)  Tallon designs a device that can read the transmissions of other creatures' optic nerves, and direct the data into the brain of anyone wearing a special headset.  Now he can see the world through the eyes of other nearby people and animals!

When Tallon hears a rumor that Cherkassky is being transferred to the prison to get his final revenge, the Earthman makes his getaway, sneaking and fighting through monster-infested swamps, train stations, suburbs, a factory, etc., on his thousand mile journey to the space port.  Along the way he encounters various wacky characters, including Earthborn hobos who hate Emm Luther's theocratic regime and a woman with a cat fetish (she likes to wear Tallon's headset and tune in on felines while they mate!) 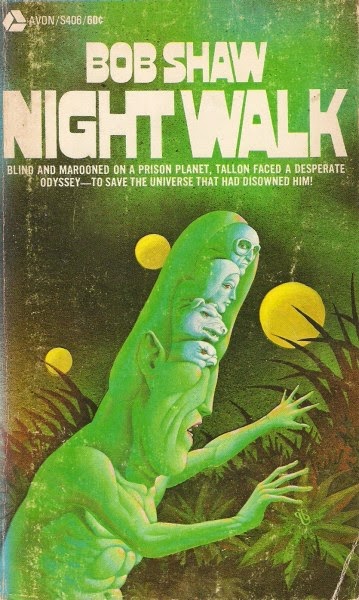 Like Orbitsville, Night Walk is a good adventure story with intriguing characters and cool SF elements.  Shaw really explores the headset idea; Tallon and others use it to see the world (and themselves) through the eyes of birds, cats, dogs, and people, and Shaw's speculations on how you would adapt to living, travelling, and fighting for your life through the eyes of other creatures are entertaining and compelling.  The political and economic theories of the Lutherian theocracy, the novel's version of interstellar travel, and the memory-erasing business are also well done, and are more than just window-dressing, serving the human side of the story.  For example, in a poignant bit of character development, the vindictive Cherkassky erases Tallon's memories of his first love, but we readers can detect echoes of these memories in Tallon's later actions and feelings.

As in Orbitsville, there is an interesting and sympathetic female antagonist (though feminists and radical individualists may groan when told "Twenty-eight years it had taken her to discover that she could not become a complete human being by herself.") Another similarity to Orbitsville is the ending; Tallon figures out an efficient way of exploring the universe, opening up vast living space and ending any need for competition over territory, thus ushering in a new era of peace.

An impressive and fun piece of work; I'll be keeping my eyes open for more Shaw books in my future travels.
Posted by MPorcius at 2:02 AM