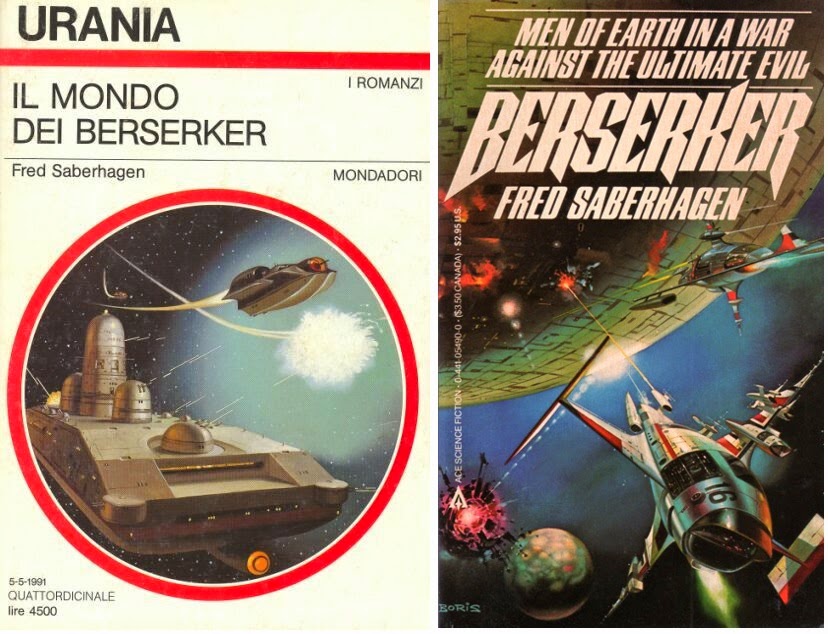 This week I finished up my 1967 copy of Fred Saberhagen's Berserker, a collection of stories about huge space faring robots bent on exterminating all life in the galaxy.  The volume contains eleven stories that first saw light in the Fred Pohl-edited magazines If and Worlds of Tomorrow; I tackled the first five in our last installment, and in this post we'll look at the remaining six. 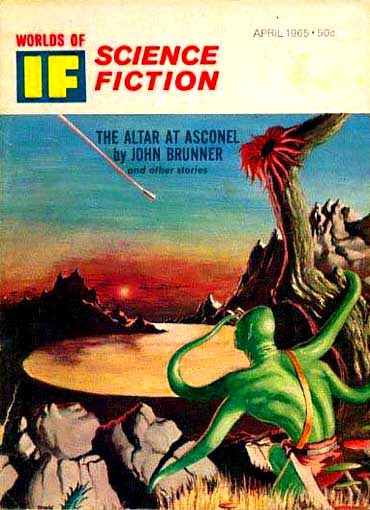 In "Stone Place" we learned that the berserkers had captured human admiral Johann's fiance and brainwashed her into hating Johann.  How did the berserkers come up with such a diabolical scheme? In "What T and I Did" we meet the traitorous man who gave the genocidal robots the idea! In return for this advice, the berserkers put the traitor in charge of other human captives, whom he sadistically abuses.

When the berserker is damaged at the big battle described in "Stone Place" the traitor suffers a head wound.  One of the other human captives on the berserker is a genius surgeon, and he patches up the traitor's skull, and takes the opportunity to try to turn the sadistic creep into a good person by tinkering with his brain!

Cleverly, Saberhagen tells the story in a nonlinear fashion, from the point of view of the post-brain-surgery traitor (much of it in first-person present tense, like it's a Malzberg story or something!) When he wakes up from the surgery he remembers very little, and he learns the truth about himself and his actions along with us readers.

This one is pretty good. 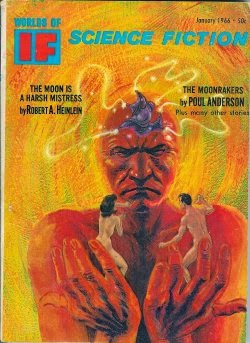 This one is a broad farce, I suppose intended to be funny and make the point that humor is an important element of life.

Planet A has an elected government, but it is what you might call "big government." There's a Minister of Diet, for example, who is always telling people what to eat, and the government has what we might call a Fairness Doctrine or Equal Time rule which mandates that all the political parties have equal access to the airwaves.  Even more alarmingly, the government of Planet A enforces a utilitarian seriousness and sobriety on the population.  Citizens are expected to contribute materially to society, and humor is considered a distracting waste of time.  As the story begins, a comedian who tried to make people laugh is sentenced to solitary confinement at a lookout station on the edge of the star system!

Out there at the limits of the system the comic meets a berserker, this one a 40-mile wide sphere.  Like the comedian, this berserker is a misfit among its kind: a technical error has left it ignorant of the details of its mission--it doesn't quite comprehend what life is or how to destroy it.  The comedian takes command of the berserker and has it construct a troupe of comedy robots.  One of the robots is modelled on Jack Benny ("an Earthman of ancient time, a balding comic violinist..."), others are caricatures of Planet A politicians.

With the threat of the berserker cowing the government, the comic returns to Planet A and he and his robots give a performance on worldwide TV that humiliates the government and has the whole planet laughing.

I won't call this story bad, but it didn't make me laugh and in general I am not a fan of absurdist humor. 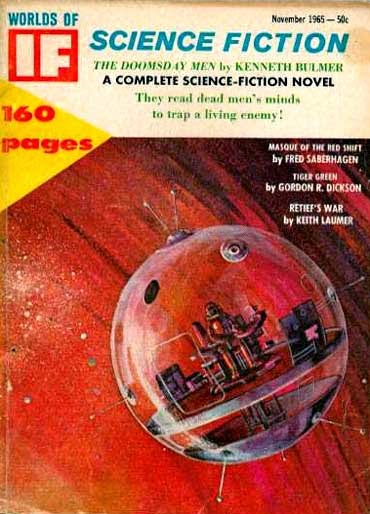 Saberhagen gets mentioned on the cover again, maybe because of the provocative title?

In preparation for reading "Masque of the Red Shift" I reread Edgar Allen Poe's "Masque of the Red Death" at gutenberg.org. In the Poe story (which is very short) some decadent aristocrats secrete themselves in a fortress while the countryside is ravaged by a horrible plague.  In the fort they have parties all the time, but then a mysterious figure appears among the revelers, a figure which carries the plague and represents death, the fate which even the wealthiest and most sophisticated of us cannot escape.

In Saberhagen's story we again encounter the Emperor of Esteel, brother of the hero Johann--we first met these guys in "Stone Place."  The Emp, worried that his brother threatens his power, has Johann put into suspended animation, but tells the public that Johann has died of plague.  The Emp and fifty or sixty of his courtiers are partying like it's 2999 on his flagship when a berserker robot, disguised as a brainwashed human rebel captured by Johann, sneaks on board.  In true horror fashion the berserker disguised its robot by ripping the skin off the rebel and putting it over a robot body.  Yuck!

The skin falls off the robot, the truth is revealed, and the robot massacres almost everybody on the flagship before the Emp blows it away.  Then Johann is rejuvenated, and sacrifices himself to save his brother and a few civilians by drawing away the berserker into a "hypermass," a thing like a black hole.  (Wikipedia is telling me that the term "black hole" was not in general use until a few years after this story was written, and first appeared in print in 1964.)  The "red shift" in the title refers to how the apparent color of Johann's ship changes when viewed from the flagship as it accelerates into the hypermass.

This one is OK. 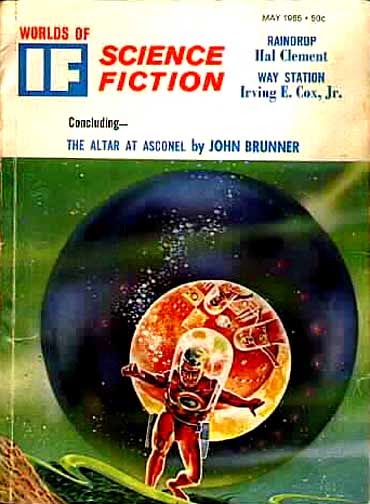 This story takes place on a planet colonized by humans centuries ago, but which fell into primitivism after a cataclysmic war.  The humans still living on the planet are barbarians with no technology beyond the spear, who think the ruins of their space faring ancestors are temples or gods themselves.  When a berserker attacks the planet a shepherd boy witnesses the long-buried hi-tech defenses come to life.

I thought this one slight, but entertaining..

This one quotes extensively from Chaucer's "The Knight's Tale." Saberhagen is into recycling classic stories from history and literature, I guess.  (Robert Silverberg has done similar things, basing Man in the Maze on Sophocles's Philoctetes, Downward to the Earth on Conrad's Heart of Darkness, and writing several times about Gilgamesh.) 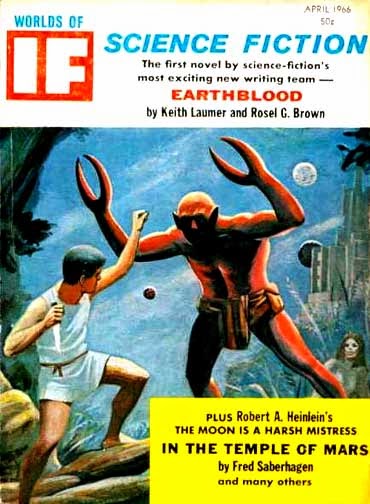 The Emperor of Esteel has a new flagship built, the most powerful star ship ever constructed by humanity.  Because he is a twisted pervert the Emp has an arena and gladiator slave quarters built into the ship so he can watch men fight to the death.  Before the ship is delivered to him (he is still out by that hypermass in his old flagship) it is infiltrated by two factions of people with their own theories as to how the ship should be used.  One group secretly wants to use the new supership to try to rescue Johann, whom they believe may still be alive, orbiting the hypermass.  The second group is even more perverted than the Emp--these freakos worship the berserkers as embodiments of Mars, the Roman god of war!  They secretly want to use the super ship to make sure Johann, the greatest of all foes of the berserkers, is destroyed once and for all.

Luckily, the pro-Johann faction, among them Mitchell Spain, the writer and space marine we met in "Stone Place," prevails.  When the berserker-worshippers try to take over the ship, Spain and his friends release the gladiators, promising them their freedom if they defeat the hijackers, and they make short work of the cultists.

In a scene in which Saberhagen expresses his optimistic view of humanity (and I suspect his Catholic belief in free will), the berserker-worshippers use a mind ray on a gladiator that is meant to drive him insane with hate so he will massacre his friends. The love of a woman gives him the strength to overcome this evil influence. 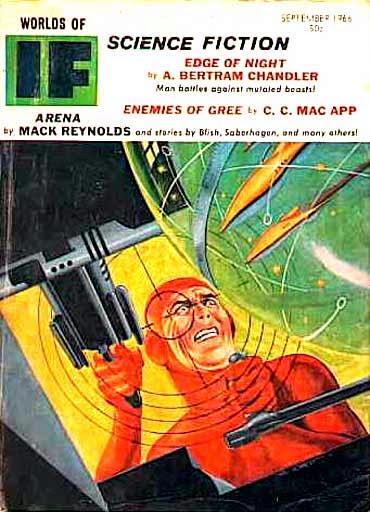 In this, the last story in the collection, Saberhagen tries to give us the "sense of wonder" classic SF authors often try to achieve.  Johann is in orbit around the hypermass, moving faster than the speed of light.  At such speeds, and under such tremendous gravity (the hypermass has more mass than a billion Sols), the ordinary rules of physics are out the window.  The berserker ship that is behind him tries to shoot him down, but in this weird environment energy guns and explosives fail to operate properly.

Johann admires the scenery, dust clouds and rocks and lightning and all that, and contemplates the nature of God.  After some days or weeks alone a rescue team from that new flagship arrives to save him.

This story is alright, but it doesn't really work on its own--it feels like the denouement of a novel, a sort of philosophical resolution after the action climax.  (Presumably, most people who read it in If back in the '60s were familiar with the earlier stories featuring Johann and the berserkers.)  Of course, the action climax was back in "Stone Place," 80 pages ago, so "The Face of the Deep" feels a little flat and anti-climactic.

Because we follow Johann and his brother through "Stone Place," "Masque of the Red Shift," "In the Temple of Mars" and finally "The Face of the Deep," Berserker sometimes feels like a fix-up, a novel made by stringing linked stories together.  But the tale of Johann is interrupted by two stories which have nothing to do with Johann, "Sign of the Wolf" and "Mr. Jester" (with the latter in a totally different tone), and one story, "What T and I Did," which mentions Johann but in which he does not appear.

Another oddity is the brief introductions before each story, which really serve little purpose other than to expand the importance of the Carmpan.  The Carmpan also get top billing on the back of the book.  Yet, actual Carmpans only appear in one of the stories, and in my opinion they are more or less superfluous in that story.

I thought these six berserker stories, with the possible exception of "Mr. Jester," all worth reading as entertainment, and except for "Sign of the Wolf," each has something odd and memorable about it, be it the references to Poe, Chaucer, and Jack Benny, the hypermass, or the bifurcated personality and unusual story structure of "What T and I Did."

It is true that I have pointed out quite a few things I didn't care for in individual stories and some weaknesses of the volume as a whole, but for the most part I enjoyed the book and feel comfortable recommending Berserker to classic SF fans.
Posted by MPorcius at 10:44 PM