"In the British Isles there are said to be fifty thousand devil cultists, and in America at least half a million.  I think it is probably symptomatic of revolt against science and our dehumanized urban lives; against impersonal machines like computers that plan and program our lives without recourse to personal appeal." 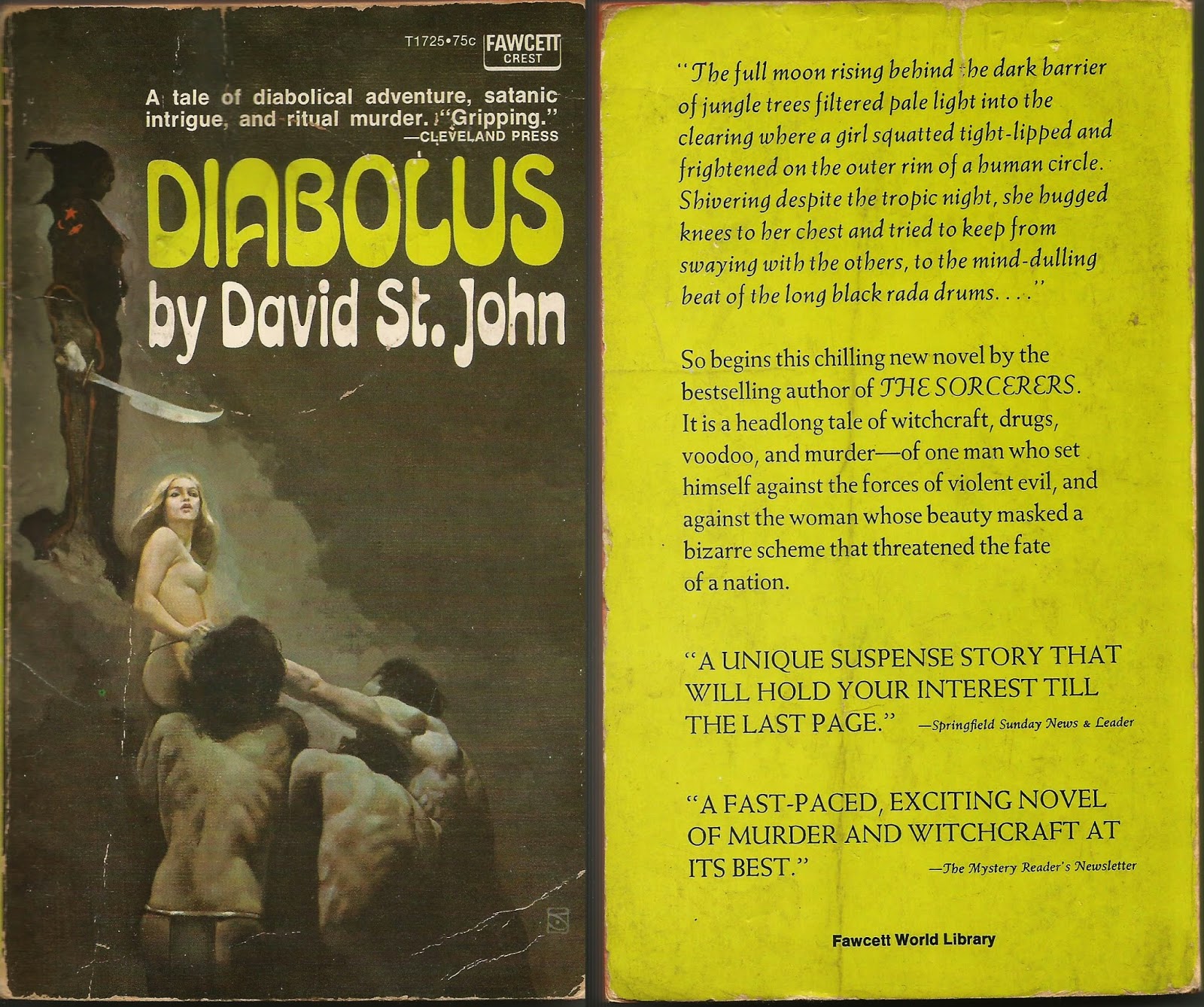 I purchased this battered 1971 paperback edition of Diabolus by David St, John largely because of the Jeff Jones cover, with its abundance of naked flesh, sinisterly fashioned sword, and black-clad figure with red wizardly shoulder icons.  Another major factor that led me to part with a few of my scarce shekels was on the inside cover.  There, a previous owner had drawn his own bookplate, an image of (I guess) some kind of urn or altar on a pile of rocks.  Beneath the drawing is some fancy writing, indicating that this volume was a constituent part of the Jerry Something Collection.  I love the idea of some guy calling his pile of books about satanists the Some Guy Collection, and drawing his own bookplate in dozens (or even better hundreds!) of paperbacks.  I just wish I could read his last name. 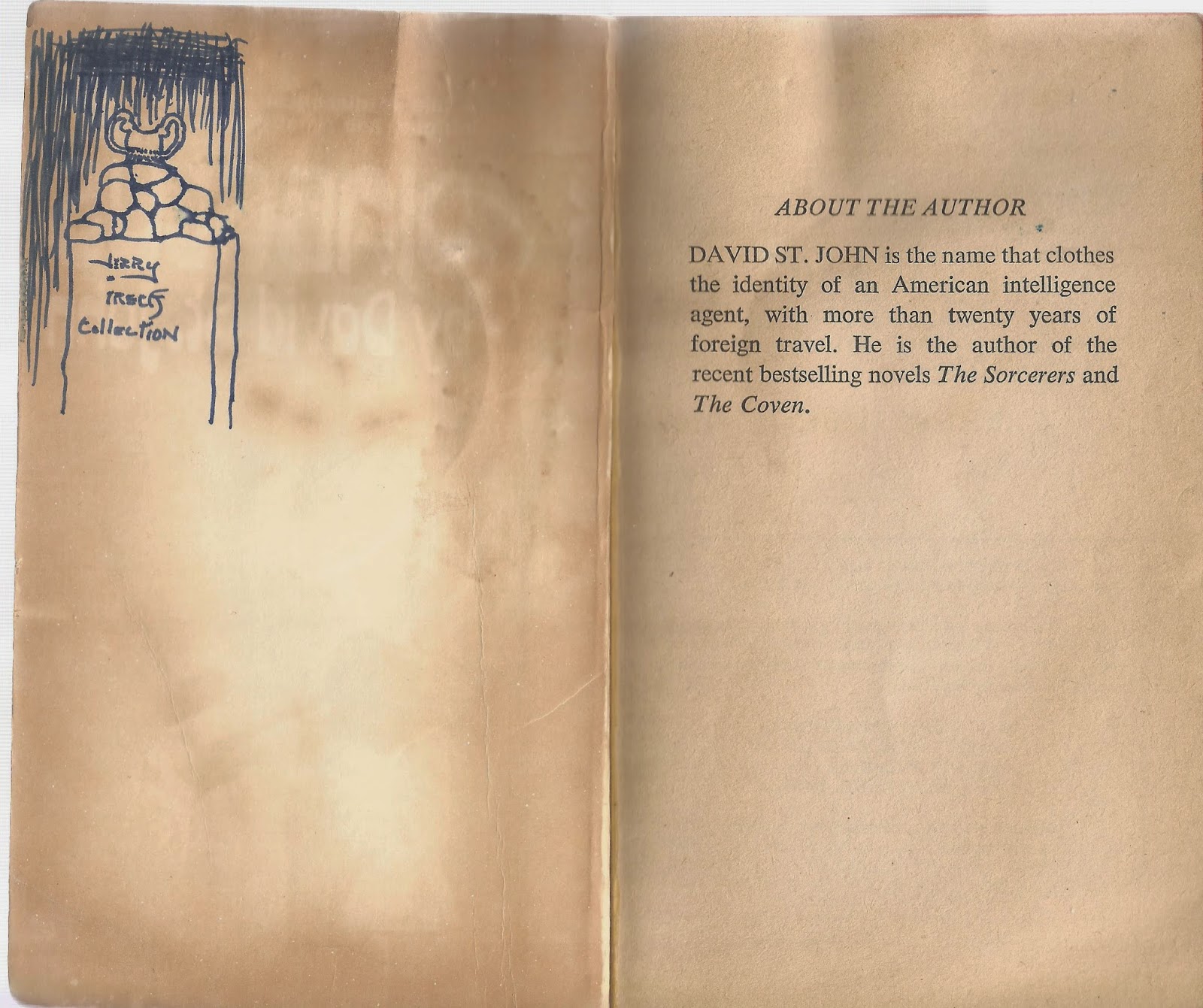 The mysterious little bio of David St. John is also amusing.  A quick look at Wikipedia indicates that St, John was a pseudonym for E. Howard Hunt, a man who served in the U.S. armed services and intelligence services during World War II and the Cold War, and then, while working for the White House, committed various crimes against Richard Nixon's political enemies, resulting in his being imprisoned for over two years.  Besides Nixon, Hunt had close relationships with such figures as Allen Dulles and William F. Buckley.  Sounds like an exciting life!  Did such a life prepare Hunt to write compelling thrillers?  Is Diabolus a worthy addition to the Jerry Something Collection and now the MPorcius Collection?  Let's see!

CIA operative Peter Ward is on vacation on Lapoire, a French island in the Caribbean. He relaxes alone in a cottage by the beach, collecting shells and hunting lobsters.  A nice rest after helping moles escape from Moscow!  But then the fourteen-year-old girl who cleans and cooks for him disappears, and is later found dead by police, her body showing signs she was raped.  We readers already know she was witness to a voodoo ceremony, and Ward figures this out pretty quickly himself.

Ward spends much of the book doing the things guys conventionally do in detective and espionage fiction, and the first 40 pages of the book, thanks to the tropical island setting and some other elements, reminded me of Dr. No.  Ward talks to the police, who seem incompetent and/or corrupt, gathers clues by talking to a bartender and a priest and tailing a guy who tries to murder him by leaving a venomous snake in his bed.  When he starts learning things the police run him off the island, but Ward promises, MacArthur style, to return and seek justice for the servant girl.

In Washington the CIA chief sends Ward to Paris to investigate the French Foreign Minister's wife, Simone de Marchais.  Madame de Marchais  has been acting a little strange lately and we don't want her goofiness to ruin an upcoming diplomatic meeting that is critical to Franco-American relations! In Gay Paree Ward hooks up with a former girlfriend, a retired fashion model; she is in Madame de Marchais's social circle and can help Ward figure out what she is up to.  After some horizontal refreshment (if ya know what I mean), they infiltrate a Black Mass and discover that Madame de Marchais is performing the role of High Priestess!

The Satanists see through Ward's disguise (he is claiming to be a Canadian devil-worshipper and even has a black crow who sits on his shoulder and says "Je suis le Diable") and drug him.  This gives "St. John" a chance to pen a psychedelic "bad trip" scene in which Ward hallucinates snakes, tentacles, and naked women, feels his "blood boil," and learns "the secret of Time."  When Ward comes to his senses he learns the villains have checked him into a high security mental institution!  Ward busts out of this French funny farm and with the help of the fashion model and his CIA buddies unravels the whole plot.

It turns out that a Marxist Frenchman and Chinese communist agents are using voodoo to inspire the blacks of Lapoire to fight for independence; the daughters of islanders who don't go along get sacrificed!  (The ChiComs are hoping to use the island as a submarine base.)  Madame de Marchais grew up on Lapoire, and the conspirators have convinced her that she is a reincarnated 17th-century witch.  The main duties of the office of Satanic High Priestess (Paris branch) are to have sex on an altar in front of the entire coven, and the commies are taking photos of Madame de Marchais performing these duties to use as blackmail against the Foreign Minister and damage US-French relations. 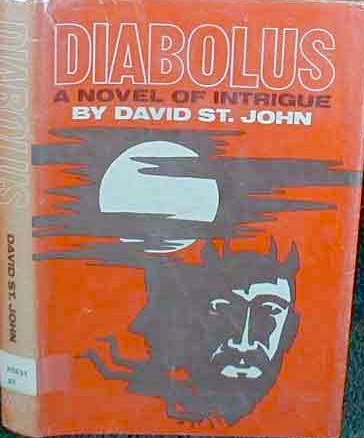 In the last 16 pages of the 160 page book Ward returns to the Caribbean and he and a black cop and a black Catholic priest battle the French traitor (he is acting as voodoo master priest on Lapoire) and his fanatic black acolytes.

While more or less competently written, Diabolus is pretty disappointing.  First of all, just like in real life, the witchcraft stuff in the novel is all a scam; there are no magic spells or demons in the book, the commies are just using voodoo and Satanism to fool ignorant blacks and naive white hippies.  The numerous long descriptions of voodoo ceremonies in Lapoire and Black Masses in Paris thus lack any dramatic power, because we know they are a trick.  (As a kid I always found it disappointing that the monsters and ghosts in "Scooby-Doo" turned out to be jerks in suits, and I felt the same way when it became clear that the Lapoire voodoo guys and Madame de Marchais did not really have any magic abilities.)

Rather than a tale of the supernatural, Diabolus is a Cold War thriller; the real subject of the novel is  not the Devil but the social and international instability of the late 1960s and early 1970s.  In the passage quoted at the head of this blog post, and again when Madame de Marchais asks him (while she still believes she is a witch and he is still masquerading as a Satanist) why he has turned to the Devil, Ward suggests that the horrible "state of the world today" is what has driven people to turn against Christian and bourgeois values and take up witchcraft.

Ward himself is portrayed by "St. John" as a victim of the late twentieth century problems of violence and turning away from the natural world in favor of technological/urban life.  There is a brief scene in which Ward visits his sister's country estate, where he keeps his hunting dog and horse.  In these few pages we learn that Ward's wife was murdered, and Ward finds that his hunting dog has recently died, and his horse is fat because he has not been around to ride it.

Despite the occult rituals described in the novel, the real menaces faced by Ward and all of Western society are a collapse of social cohesion (the Parisian student riots are mentioned, and poor relations between the US and France are a major plot element of the novel), drugs (minor characters are addicted to cocaine, and the villains and heroes of the novel repeatedly drug each other) and communism.  When Ward lists reasons why kids turn to witchcraft, I thought perhaps "St. John" was using "the occult" as a stand in for Marxism and drug use, new belief systems and practices that alienated young people would turn to, despite (or because) their elders find such things absurd and dangerous.

A thriller about communists that highlights social problems in the West like drugs and alienation could work, but I'm afraid St. John doesn't do a very good job of it.  A major problem is that there is no compelling villain in Diabolus; Madame de Marchais, instead of being a powerful sorceress or a cunning femme fatale, is a victim, a naif manipulated by the commies.  The commies are not interesting, either; they almost never appear in the book, instead doing their work behind the scenes.  The French traitor isn't even revealed until the last third or quarter of the novel,and Ward never actually has a conversation with him (Ward just shoots him down in the middle of a melee in the jungle in the end of the book).  Few of the black cultists and none of the Chinese communists even have names.  Neither the French traitor nor the Chinese communists have any dialogue; everything we learn about them is from the conversations the good guys have with each other. 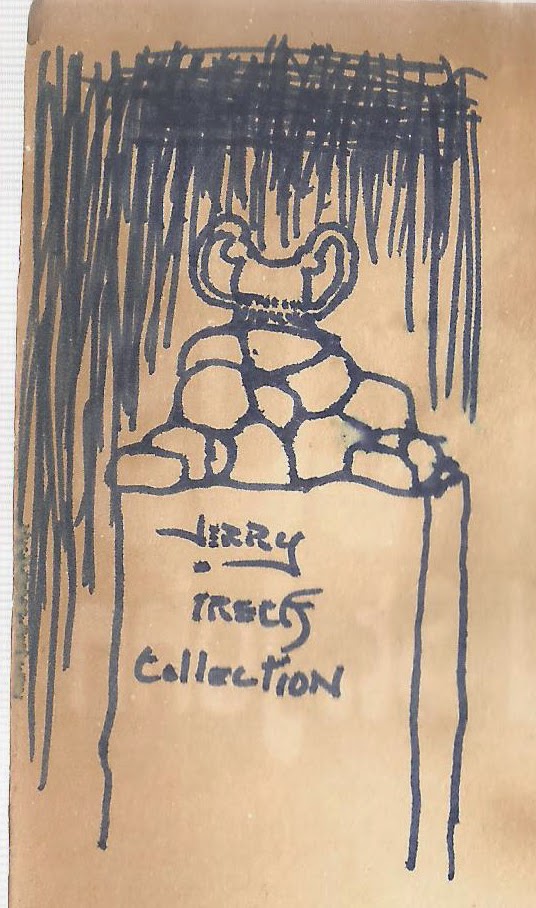 There is also little action or suspense, especially in France.  One CIA agent gets murdered, but it happens off screen; Ward doesn't witness the murder, he just hears about it.  When Ward (who mostly does detective stuff, looking for clues and all that) does have dangerous confrontations in Paris they are not with sinister Red agents or bizarre voodoo priests, but boring generic thugs hired by the commies.

While I'm complaining, I may as well express my disappointment with the novel's love story.  Ward has sex with the fashion model, and she risks her life helping Ward; she seems clever and brave.  So I figured Ward and the fashion model would rekindle their relationship and maybe get married at the end of the novel.  More fool me!  In the end Madame de Marchais, who comes across as kind of a dope and who had no opportunity to develop a human or physical relationship with Ward, leaves the French Foreign Minister to marry Ward.

Looking back on the novel the scenes I found most interesting in Diabolus were the jet-setting touristy scenes about Ward's vacation on the beach and his shopping and driving around and eating in Paris.

I'm going to have to give Diabolus a marginally negative review; it is not irritatingly bad, but the whole thing is kind of limp.  I hope Jerry Whatever enjoyed it more than I did, after putting in so much work decorating it!  I will not be seeking out St. John's other witchcraft books, even if they have Jeff Jones covers.
Posted by MPorcius at 10:06 PM