The Rebel Worlds by Poul Anderson

"A hundred thousand planets, gentlemen, more or less...each with its millions or billions of inhabitants, its complexities and mysteries...its own complicated, ever-changing, unique set of relationships to the Imperium. We can't control that, can we? We can't even hope to comprehend it. At most we can try to maintain the Pax. At most, gentlemen."

Here it is, the fourteenth title from the Joachim Boaz wing of the MPorcius Library to be discussed here at the blog.  As you know, in summer 2018, Joachim, one of the leading lights of the internet vintage SF community, made a generous donation of books to my collection, and I have slowly been working my way through them.  Below find a list of my first thirteen reads from this donation, with handy links to my blog posts about each. 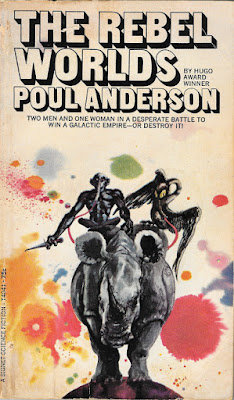 Slave Planet by Laurence M. Janifer
Three Novels by Damon Knight
Dark Dominion by David Duncan
New Writings in SF6 edited by John Carnell
Tama of the Light Country by Ray Cummings
Tama, Princess of Mercury by Ray Cummings
A Brand New World by Ray Cummings
Ultimatum in 2050 A.D. by Jack Sharkey
The Power of X by Arthur Sellings
The Enemy of My Enemy by Avram Davidson
The Bright Phoenix by Harold Mead
The Stone God Awakens by Philip Jose Farmer
Garbage World by Charles Platt

Today's topic of discussion is Poul Anderson's 1969 The Rebel Worlds, a Signet paperback with what looks like a monkey and that bird from Captain Harlock riding a rhino on the front and an ad for a novel about a plot to murder the pope by New York fixture Pete Hamill on the back.  (Growing up in Northern New Jersey in the '70s and '80s, where most of channels on our TV were broadcast from New York, and then living in New York in the '90s and aughts, Pete Hamill's name was one I heard bandied about all the time, but I never expended any of the precious minutes of my all-too-brief life actually reading anything he wrote.)  The Rebel Worlds stars Dominc Flandry; there are a multitude of Flandry stories and novels, but so far I have only read one Flandry short story, 1951's "Honorable Enemies."  I liked "Honorable Enemies," so hopefully I'll like this 135-page novel.  The Flandry stories are set in the same universe as the van Rijn and Falkayn stories, of which I have read quite a few (the planet Satan, the main object of contention in Anderson's 1968 novel about van Rijn and Falkayn, Satan's World, plays a minor role in this novel), but while those stories are set in the period of the human race's exploration and growth across our arm of the Milky Way, the Flandry tales are set in a later era of big government, decadence and the threat of decline. 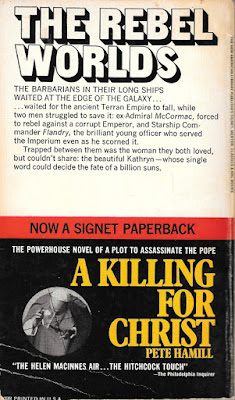 The Terran Empire of 100,000 planets is in trouble: its borders are threatened by fleets of barbarians and by the Merseian empire, its Emperor and his court are corrupt and the imperial bureaucracy is unable to keep tabs on every one of those 100K worlds.  After a brief and mysterious prologue in the voice of aliens with a sort of collective consciousness thing going, in Chapter I we meet Admiral Hugh McCormac, commander of the naval forces in the Alpha Crucis sector, one of the more impressive men charged with keeping the peace in the Terran Empire.  We find that this dude is in pickle--interned in a prison cell on a satellite orbiting planet Llynathawr, seat of the governor of the sector!  It appears that the governor, Aaron Snelund, the son of a whore who was made governor of Alpha Crucis after (allegedly) serving as the Emperor's catamite, is an absolutely corrupt pervert and has arrested McCormac so he could seize and rape the Admiral's beautiful wife, Lady Kathryn!

In Chapter II we are on Terra where ladies' man and 25-year old naval intelligence officer Dominic Flandry travels to Intelligence HQ via air car taxi and grav tube; the head of Intelligence has heard from Snelund that he has arrested McCormac, and the Intelligence chief wants Flandry to investigate what the hell is going on in Alpha Crucis sector--after all, everybody knows McCormac is an honorable man and Snelund is a nauseous rotter.  Flandry is given command of an escort destroyer and heads off to Alpha Crucis on this fact-finding mission.

In the Alpha Crucis sector Flandry and his multi-species crew (the second-in-command of the escort destroyer is a six-limbed sabre-toothed tiger man named Rovian) recognize the extent of Snelund's crimes, which include mass-crucifixion of the green-skinned natives of one planet when they refuse to serve as slavers--Snelund is apparently selling to barbarians living outside the Empire's borders innocent people who have every right to Imperial protection.  It looks like Snelund seized Admiral McCormac and his wife Kathryn in order to conceal these sorts of atrocities.  Flandry and crew also learn that McCormac's men have liberated him from prison and the popular Admiral has declared himself Emperor and is massing a rebel fleet and receiving pledges of allegiance from a number of planets--civil war is in the offing!

Flandry has an interview with the feminine Snelund on Llynathawr, and then Rovian leads a raid that frees Lady McCormac--before Snelund knows what is up, Flandry's ship is in hyperspace with Lady McCormac aboard.  From the Lady, Flandry learns more about Snelund's crimes and plans--the clever creep is trying to amass enough money to return to Terra and become the eminence grise behind the dim-witted Emperor, and actually hopes for a local war in Alpha Crucis sector that will provide an opportunity to nuke planets and thus destroy evidence of his abuses and atrocities.

Flandry steers his ship towards the McCormacs' home system (star Virgil, its planets named after characters from The Aeneid), hoping to open negotiations with the rebel admiral, whom he expects will be there with the rebel fleet.  But, before he can talk to anybody, Flandry's ship is wrecked in a naval battle with mercenary barbarians hired by Admiral McCormac.  The surviving half of Flandry's crew crashlands in a disabled space boat on planet Dido, which Kathryn McCormac knows pretty well--she is a scientist who conducted research there.  With Rovian dead, Lady McCormac, who is smart and resourceful and kind, becomes Flandry's confidant and support; she guides the survivors as they march hundreds of kilometers across the planet.  Flandry, already attracted to her on the ship, falls deeply in love with the pretender to the throne's wife during this adventure; Kathryn herself has feelings for Flandry, but she is loyal to her husband and to his cause--overthrowing not only the decadent and perverted Snelund but the perhaps equally reprehensible Emperor and putting in place a more just Terran administration.

One of the many critical roles Lady McCormac plays on the long march is negotiating with the Stone Age natives of Dido, those aliens depicted on the cover, whose oral history is quoted in the prologue.  The Dido natives are the most remarkable part of Anderson's novel, and it is fully appropriate that they are depicted on the cover instead of the more conventional choice of a space warship or a bunch of human space marines.  A tribe of Didonians is made up of a bunch of creatures of three types--one much like a rhino, one much like a monkey, and one much like a bird.  When these creatures act as individuals they conduct themselves much like animals, following their instincts, but they can connect their brains via tentacles, and when individuals from three different species are connected they have high intelligence and can speak and use tools and so forth.  Different combinations of the creatures have unique personalities and skill sets and are thus more appropriate for different conditions and challenges that the tribe might face; a single rhino might sometimes be part of the collective entity called "Cave Explorer" but when combined with a different monkey and bird be part of the entity called "Master of Songs," or yet another known as "Raft Farer."  I was impressed by Anderson's concoction of aliens for his adventure story that are actually novel and alien and not just obvious analogs of Earth ethnic or political groups as we see so often in SF.  The native Didonians play an important role in facilitating the march across Dido and in the way Flandry resolves the plot.

Flandry, in the hoary tradition of classic SF, figures out a way to trick and manipulate everybody else in the novel so that the evil Snelund is deposed and Lady McCormac achieves her revenge on him and the civil war is ended with a minimum of death and destruction, with Hugh and Kathryn McCormac and their followers permitted to escape the Terran Empire without being punished for trying to launch a revolution.  When Flandry negotiates with McCormac, Anderson has him express the attitude towards revolution of conservatives who have a tragic view of history and human nature: sure the Empire sucks, but violent revolution will only make things worse by killing lots of people and setting a precedent in favor of violent change that other ambitious people, people much less decent and less capable than the McCormacs, will follow, leading to total chaos and mass misery.

The Rebel Worlds is not difficult or challenging (though some readers may find the implied homosexual relationship between Snelund and the Emperor and Snelund's offscreen rape of Lady Kathryn McCormac to be what the kids call "problematic") but it works like a charm, each individual component at least adequate and many better than adequate (I've already praised the Didonians, and all the standard SF stuff we love--the rays guns and star ships and spacesuits and space naval battle--are also good) and all of them working smoothly together; The Rebel Worlds is always entertaining or interesting, never boring or irritating.  One might see The Rebel Worlds as a more sophisticated version of classic space operas like Edmond Hamilton's Interstellar Patrol stories, in which various starfaring species ally with humans to battle evil aliens (Kathryn McCormac's abuse at the hands of Snelund has an analog in the scenes of torture and horror Hamilton included in his Patrol tales) or Jack Williamson's Legion stories, which have a strong element of human vs human political intrigue as well as space battles and monstrous aliens.  Anderson classes up his tale here with references to Mozart, Virgil, and The Tale of Genji, and soberly explores how empires and revolutions actually work--not very well, we must sadly admit.

I'm looking forward to reading more Flandry stories in the future.
Posted by MPorcius at 12:19 AM