Here's the fourth book from the new Joachim Boaz wing of the MPorcius library that I'll be reading, New Writings in SF 6, edited by John Carnell.  This is a copy of the American 1971 Bantam printing; this anthology of all new stories first appeared in Britain in 1965 as a hardcover from Denis Dobson and was presented in paperback by Corgi in 1966 and again in 1971.

Today we'll talk about the first three stories in the book, and then tackle the remaining four in our next blog post.  If you want to read what Joachim had to say about New Writings in SF 6 before or after (or instead of 😢) reading my comments, check out his November 2017 post on the book.  If you are desperate to read the stories before getting spoiled by Joachim or me, or after hearing what we have to say, you need not wait--the 1966 Corgi edition of New Writings in SF 6 is actually available at the internet archive.

"The Inner Wheel" by Keith Roberts

I've never read any fiction by Roberts, though I read his article in Brian Ash's Visual Encyclopedia of Science Fiction four years ago and poked (gentle?) fun at it on this blog.  "The Inner Wheel" is by far the longest story in this anthology, and Carnell uses up the lion's share of his Foreword to this volume discussing it.  I guess this is an important and widely admired story--it has been published numerous times as the title story of a Roberts collection (sometimes advertised as a novel) which has appeared with various interesting covers.  [UPDATE 8/19/18: isfdb labels The Inner Wheel a collection, but in the comments below Paul Fraser agrees with the people at Playboy Press that the designation of "novel" is appropriate.] 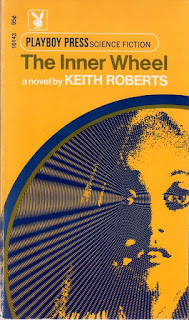 "The Inner Wheel" comes across as a self-consciously literary work, with passages full of italics meant to represent a collective consciousness (or "gestalt mind," as Roberts puts it), lots of poetical repetition, a surreal dream sequence in which rust spreads from a decaying train to the surrounding town and people, and plenty of Dickensian names.  Jimmy Strong, an artist, is our main character.  His father James Strong was a scrap dealer who struck it rich by purchasing old World War II vehicles like Bren carriers and half-tracks and then renting them out to film productions.  After his father's funeral, flush with his inheritance, Jimmy goes to the town of Warwell-on-Starr, which people tell him again and again is "nice."

In the town odd things occur that suggest Jimmy's mind is being read and his unspoken desires responded to; when he feels in need of company some World War II vets appear who tell him stories about their service in the Eighth Army, or a dog, or a sexually available woman.  He also has strange dreams, some of which vaguely hint that a  "Wheel" is "driving this town."  Jimmy is determined to figure out the town's strange secret; in some ways "The Inner Wheel" is structured like a detective story or a Western in which the hero arrives at a corrupt small town and confronts its evil establishment, and Roberts includes what I take to be clues that we should think of the story in this way. 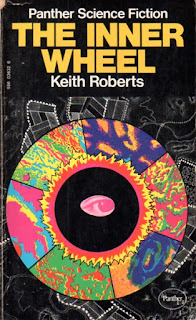 Jimmy meets another attractive woman, Anne Nielson, and he engages in a psychological and psionic struggle over her mind and allegiance with the mysterious psykers who rule Warwell and used their powers to attract Jimmy and Anne to the place in hopes of integrating them into their gestalt.  Jimmy (whom late in the story the omniscient narrator sometimes identifies as "Strong" instead of "Jimmy," reflecting one of "The Inner Wheel"'s themes, that of the maturation process, the growing into adulthood of Jimmy the individual and of the entire human race) discovers the weakness of the gestalt mind, that pain felt by one of the psykers is felt by all, and this discovery facilitates his and Anne's escape.  This escape is likely to only be temporary, but we can hope that, just as Jimmy has grown to be a more responsible, less selfish person, so will the psykers of the gestalt, in course of time, grow into their powers and use them more benignly.

This story isn't bad, but I felt it too long and in spots tedious with too much description, while the characters of Jimmy and Anne are sort of flat and boring.  The story is vague and dreamlike, and I would have preferred something sharp and bold.  "The Inner Wheel" certainly didn't hold my attention like the two Second Story Books Clearance Cart finds I was reading at the time, James Taylor and Martin Davidson's Bomber Crew and Lyndall Gordon's T. S. Eliot: An Imperfect Life, so I perhaps didn't give "The Inner Wheel" the attention it deserves as I was reading it 5 or 10 pages at a time over a series of days.

Spencer, who worked in advertising and as a college lecturer in English, has like 16 short stories on isfdb; most appeared in New Worlds during the period John Carnell was editing the magazine (before the editorship was taken up by Michael Moorcock and the magazine became the flagship of the New Wave.)

"Horizontal Man" is one of those stories about how in the future everybody will be immersed in virtual reality games and abandon the real world (remember Kuttner and Moore's 1955 story "Two-Handed Engine"?)  Timon (named perhaps for the skeptical philosopher and/or the Athenian misanthrope and hermit?), an artificial umbilical cord providing all the sustenance he needs, sits in a room before a control panel; he has apparently spent hundreds or thousands of years in that couch!  Via the control panel he can call up any of thousands of fantasies to be pumped into his brain via a cable, including affairs with over 900 different women, but he has experienced every fantasy hundreds and hundreds of times and is bored of them all.  Spencer describes a few of the fantasies--surfing, playing four-dimensional chess, and a date at a night club with a sexy chick.  The author compares the fantasies to recorded music--after a few hundred listens a recording of a song is too predictable and becomes tedious, likewise grow boring the 900 women and the multitudinous variations of a game of chess, once Timon is intimately familiar with their every idiosyncrasy.

This is one of those stories that is more of an idea than a plot-driven narrative.  I thought maybe Timon was going to launch a rebellion or commit suicide, but when Timon is on the brink of boredom-induced insanity a robot just comes along and replaces the memory bank so Timon will have new fantasies to occupy him.  Merely acceptable, on the very brink of too boring (ironic, eh?)

It looks like "Horizontal Man" only ever appeared here in New Writings in SF 6.

"The Day Before Never" by Robert Presslie

Here's another story which never appeared beyond the various printings of New Writings in SF 6.  Robert Presslie has 40 stories listed at isfdb, and most seem to have seen print in British SF magazines like Carnell's New Worlds and Authentic Science Fiction, which was edited in its last two years by our pal E. C. Tubb.  Blogger Andrew Darlington has an extensive blog post about Presslie if you are curious about this guy and his career.

"The Day Before Never" is set in a sort of post-apocalyptic future Earth which has suffered abominably at the hands of hostile space aliens known as "the Barbarians."  These malefactors bombarded the planet with their "glazer" weapon, which "melts" things, but also preserves them, so that people and buildings struck by this ray become an ooze and actually run together, I guess like if you heated two different crayons that were next to each other and then cooled them when they were half melted, creating a blob one third blue, one third yellow, and one third green.

Our narrator is driving across Eastern Europe in a Ferrari (these post-apocalyptic stories generally include an element of wish fulfillment, providing the characters a chance to create a new and better society or, as with this Ferrari, just the opportunity to enjoy luxuries that were out of their price range before the catastrophe) past all the spectacular and grotesque half-melted people and buildings that are littering the landscape.  In a passage made to order for feminist analysis he looks at the bared breasts of the headless corpse of a teenage girl which is half absorbed into a wall.

Our hero isn't just some car thief--he's a secret agent on a mission for the anti-Barbarian resistance!  After thousands of miles of driving, he meets his contact in Riga, a woman.  The alien Barbarians are able to mimic human beings, so to prove his humanity our hero has to have sex with this woman--the aliens cannot convincingly ape human sexual passion.  (Oh, brother.)  Our narrator and this woman are key participants in a complicated resistance operation which seeks to kill all the aliens by simultaneously detonating a number of explosives set in precisely determined locations all over the world.  This scheme is unconvincing and so is the twist ending to Presslie's story.

Presslie tries to use his tedious and crazy tale as a means of talking about human nature (to what extent will people submit to tyranny to survive and to what extent will they risk their lives to oppose tyranny, and to what extent do both the collaborator and the resister compromise their values in their response to tyranny) and attempts to put across a metaphor in which a society's resistance to invasion is like the human body's resistance to infection, but the plot and style of "The Day Before Never" are not good and render any such ambitions a failure.  I have to give the story a thumbs down.  The noteworthy thing about "The Day Before Never" is the sensational/exploitative elements: the weird sex, the violence against women, and the body horror stuff; unfortunately, none of those components of the tale are entertaining or disgusting enough for me to call this a successful horror or shock story. The back cover of my copy of New Writings in SF 6 has the incongruous heading "SERIOUS BUSINESS" and claims that the stories in the volume represent "fresh new thinking."  The ideas in these three pieces (homo superior in conflict with homo sapiens, hi-tech entertainment leading to decadence, alien invasion, and journeys across a post-apocalyptic landscape) do not feel fresh or new, though I guess they are "serious."  Maybe in our next episode, when we read the rest of the stories in New Writings in SF 6, we really will find some "fresh" ideas?

Bound within this copy of New Writings in SF 6 is the exact same ad for the Science Fiction Book Club we saw in my 1971 copy of The Yngling, the one which includes a "special coin carrier" in which you send the club a dime to pay for a copy of Anthony Boucher's A Treasury of Great Science Fiction.  I own that two-volume anthology, something which I have bragged about on twitter more than once! 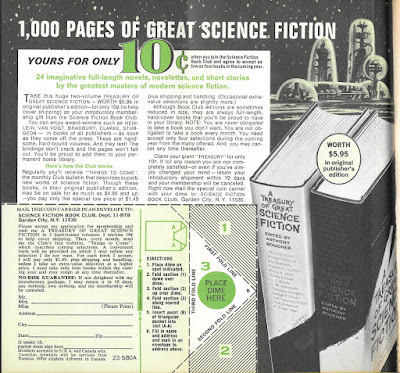 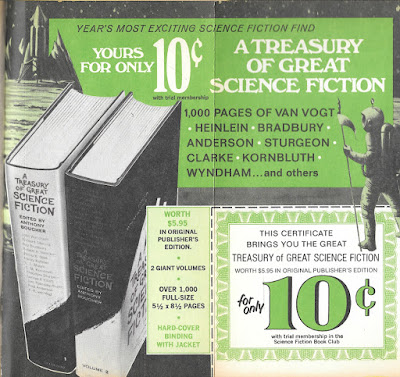