The Yngling by John Dalmas

"You're a scoundrel, barbarian....But allowances must be made for barbarians, at least for those who are giants and great swordsmen who can look into the minds of others and speak across half a world and heal dirty wounds in three days."

In April I purchased a 1971 Pyramid printing of The Yngling by John Dalmas at a West Virginia flea market because I loved the Jeff Jones cover--the lithe limbs of the combatants and the moody colors spoke to me.  I even got into a conversation with the seller about Jones and Frank Frazetta.

The Yngling, a look at isfdb revealed, was first unleashed on the public as a serial, spread over two issues of Analog in 1969.  I have to admit I groaned when I saw the Kelly Freas covers for the novel's Analog and 1992 Baen appearances--is this novel some kind of a joke?  Based on Jones' painting I had signed up for a tragic tale of eldritch magic and brooding swordsmen driven by a black fate, not the playful romp promised by Freas' covers!  Well, let's see what The Yngling is really all about.

It is several centuries in the future, and a plague ("the Great Death of 2105") has reduced humankind to a medieval culture and technology.  (I hate when that happens!  And if the fiction I talk about on this blog is any guide, this kind of thing happens all the time!)  Nils, a young man, is a member of a tribe of "neovikings" in Sweden, a trained warrior who has yet to see real combat. When he kills a man with his bare hands in a brawl he is exiled from Sweden and takes up a life of wandering.  Down in Denmark, where Nils finds they have a feudal aristocracy, our hero get arrested for poaching, but in recognition of his martial prowess (war is brewing), instead of being summarily executed Nils is mustered into the local lord's army.

The Yngling is a more or less traditional sword and sorcery story, but, perhaps to fit in at the hard-SF-focused Analog, and/or to appeal to editor John W. Campbell, who was famously obsessed with psychic phenomena, psionic powers stand in for the sorcery elements you'd find in a Conan story.  Nils turns out to not only be the strongest man and best swordsman in the land, but to have superior psychic powers; he is the first specimen of homo superior.  His powers first manifest themselves as prophetic dreams and a unique resistance to the mental attack of a marauding monster, and draw the attention of the secret network of "psis" who, like in a classic SF story by Van Vogt or Asimov, constitute a clandestine intellectual elite who pull strings from behind the scenes, manipulating European society so it evolves in what they consider the right direction.

The local lord's telepathic advisor trains Nils in how to use his mind powers, and then sends him on a mission: to kill the evil wizard--I mean the imperialistic psychic dictator--whose army and psi agents are expanding his power from his home base in the Middle East across Europe by the sword and by subterfuge.

Two of the 26 chapters of The Yngling are encyclopedia entries written long after the adventure story we are reading; one describes the neovikings and the other is a brief biography of the psionic dictator, Kazi the Undying, who was born in 2064 and is still around making trouble in Nils' own 29th century.  A genius scientist with no conscience, back in the 21st century Kazi invented a method to move his consciousness (Dalmas uses the word "ego") from one body to another, and then in the 22nd century he developed a means to put himself in a state of suspended animation.  For the last few centuries Kazi has been breeding people to provide perfect bodies for his ego to inhabit, as well as breeding an army of people he calls "orcs," a name he lifted from J. R. R. Tolkien.  (Meta!)

(Dalmas' mentioning of Tolkien's name led me to wonder if other elements of his novel were influenced by Lord of the Rings.  Nils, like Gandalf, is a guy with special abilities who travels around the West, trying to drum up resistance to a threat from the South and East, in the process confronting an important ruler's evil counsellor vaguely similar to Grima Wormtongue.  There is also the novel's structure; instead of wrapping things up fast after the climactic scenes that resolve the main plot, both The Yngling and Lord of the Rings have long denouements.)

Nils makes his way into Kazi's court, where he witnesses the genius's extravagant cruelties, which include throwing people into the arena.  (If you are going to be an SF fan you have to accept that people are regularly going to get thrown into the arena, just as a matter of course.)  Instead of executing Nils out of hand, Kazi keeps the Swedish hero around, fascinated by his unique psychic powers and hoping to make use of his exemplary genes in his breeding programs.

Nils escapes, and helps unite the people of the snowy North and the steppes of Eastern Europe against the army of Kazi; the Scandinavians have a King Arthur-style prophecy about a "young one" ("The Yngling") from the past who will return in time of need and who must be obeyed, and Nils fits the bill.  Dalmas' 20-page description of the war between the Europeans and Kazi's orcs and Middle Eastern mercenaries is boring, little more than repetitive orders of battle ("The Danes and Frisians together had already started out with seventeen hundred knights....The next day Kuusta Suomalainen arrived with four hundred volunteers") and casualty figures.  The fighting is described in a distant, antiseptic way, totally devoid of drama; it's like a Wikipedia article about some war you never heard of and don't care about.

After the Europeans have defeated the invading army the book has some 40 pages to go (my copy of The Yngling is 224 pages); this anticlimactic section chronicles Nils' rescue of his girlfriend from Turkish stragglers.  Feminists will be happy to hear that said girlfriend, herself a member of the psychic friends network, participates in her own rescue, hypnotizing a guard and decapitating him while he sleeps.  In the last paragraph of the novel she tells Nils of her premonition that humans who left the Earth on starships before the Great Death will return and wage war on the neovikings. Bummer!

As I think my little summary makes clear, The Yngling is composed of all kinds of elements--post-apocalyptic world, the barbarian who is superior to the civilized man, psychic homo superior, secret elite societies, the arena, a prophecy--we have seen before.  A bigger problem is that the story lacks character, spirit, and style; it isn't full of broad jokes like Freas made me fear, but neither is it moody and grim like Jones lead me to hope.  It is pedestrian and bland; the villain, with his big ideas and abominable crimes, is the only thing in the book that pulses with life, but he has little screen time.  The Yngling isn't bad, but it is merely acceptable.  I don't regret the time I spent reading about Nils and Kazi, but neither do I have much interest in reading any of The Yngling's three sequels.

My copy of The Yngling has bound within it a green advertisement for the Science Fiction Book Club.  In 1971 new members would receive A Treasury of Great Science Fiction, edited by Anthony Boucher, for only a dime.  Readers with eidetic memories may recall that I myself purchased the two volumes at a library book sale in April of 2015 for a dollar a piece.  (Inflation!)  From the pages of A Treasury of Great Science Fiction I have read over half a dozen short stories, including two by Henry Kuttner and C. L. Moore, as well as John Wyndham's Re-Birth (alternate title: The Chrysalids.)  A bargain even at the painful $6.00 publisher's price! 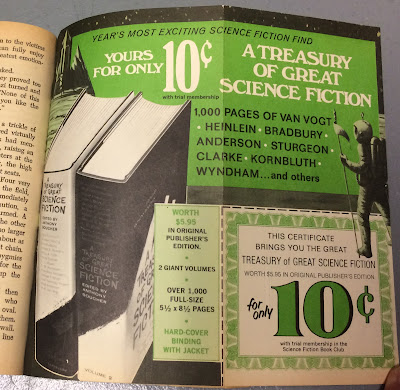 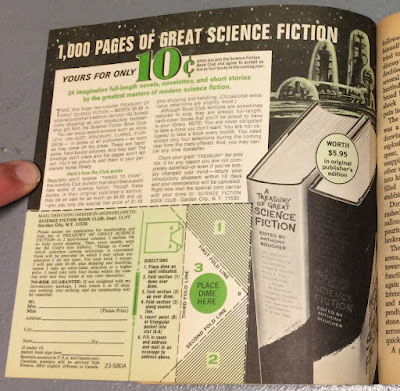