The Shores of Kansas by Robert Chilson

He studied the skyline around his house, looking hard at everything: Were things where and how he had left them?  Or had he introduced some small, slight change, 130 million years ago, a change that had made a different world? 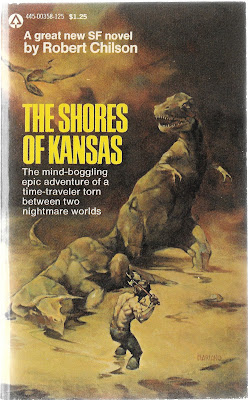 I purchased Robert Chilson's 1976 novel Shores of Kansas because of its creepy waterbound dinosaur and axe man cover, the work of Mark Mariano.  (When I see a painting in which the feet are hidden I always wonder if it is because feet are so hard to draw--it's not every dauber who can grace the world with depictions of feet as convincing and charming as those of Edward Burne-Jones or William-Adolphe Bouguereau.)  Then I read Chilson's short story "People Reviews" and was impressed by how original and clever it was, which gave me high hopes for this novel.

It is the late 20th century.  It has been discovered that a tiny minority of people (about sixty in the whole world, we are told) have the ability to travel back in time!  Grant Ryal is the only one of these people who can travel back to pre-human times, and he has become rich and famous by bringing back film and specimens from the Mesozoic Era.  Instead of moving to New York and enjoying a life of lavish leisure (that is how I would play this scenario), Missouri country boy Grant has sunk all his wealth into starting the Chronographic Institute, an entity devoted to educating the public about life in the Age of the Dinosaurs.

Years ago I read Algis Budrys' famous Rogue Moon, and was disappointed that very little of the book focused on exploring the alien death labyrinth on Luna--most of the text was a lot of psychological relationship drama revolving around a guy trying to prove he was a real man or whatever.  Somewhat similarly, after that first thrilling battle scene, Robert Heinlein's Starship Troopers is mostly philosophical discussion (though I found Heinlein's philosophical talk far more interesting than Budrys' soap opera.)  Like those celebrated SF classics, The Shores of Kansas spends more time on relatively mundane dialogue and human relationship scenes than the life and death struggles on distant landscapes which attract most readers to these books in the first place.  Of the book's 13 chapters, only three and a half, that is, about 60 of its 220 pages, are spent in the Mesozoic.  Fortunately for us adventure-fiction-loving types, as with Starship Troopers, the adventure sequences are very good.

The bulk The Shores of Kansas is concerned with Grant's relationships with the management and employees at the Institute.  Chilson really harps on the fact that Grant is an honest country boy who sees things differently from the self-serving and manipulative executives and scientists whom he has had to hire to operate the Institute; they are obsessed with PR and office politics, while all Grant wants to do is educate the public about the past.  Much of Shores of Kansas reads like a mainstream novel about a self-made tycoon or a talented artist trying to maintain control of the enterprise he built with his own sweat, blood and genius, hounded by people riding his coattails.  There are lots of scenes about how, while Grant was in the prehistoric past collecting specimens and shooting film, Business Manager Martin, Institute Director Dr. Shackelford, and Director Dr. Adrian have been ignoring his orders, allocating more resources to PR than research, and doing elitist stuff like reserving parking spaces for the executive staff (Grant orders the names painted over but then has to do it himself) and moving the copy machine out of the conference room because it looked "vulgar" in there (Grant has it moved back.)  And lots of scenes about how the Institute needs money, and so pure research has to take a backseat to schemes to raise revenue.

There are also scenes with Grant's family--fiercely independent Missouri hillbillies--that give us an idea of where he came from, and lots of discussion of his relationships with women.  Now that he is famous women are always throwing themselves at him ("Before he became famous, he had never been popular; now even the wives of his best friends propositioned him...."); Grant is not comfortable with the "legend of the ax-wielding superstud" which has grown up around him.  He also resents an up and coming female time traveller, Marian Gilmore, whom Shackelford and Adrian are grooming with the hope that she will become the second person capable of traveling back to the Mesozoic and, as Grant's partner, double the Institute's production. 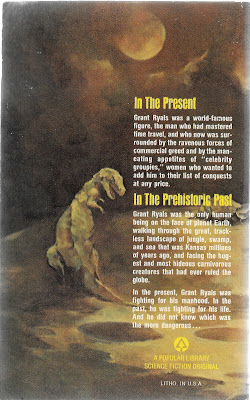 The main theme of the book is that Grant is an outsider; the only human being ever to have seen the Mesozoic, a hillbilly among college graduates, a rural MidWesterner forced to attend parties in New York and Washington and hobnob with the idle rich and the politically powerful.  In one chapter he finds himself the only white person among a community of blacks when he rematerializes in an African-American neighborhood after one of his trips back in time.  (The blacks prove more eager to help and more competent than any of the whites in the novel.)  This theme is most starkly reflected in Grant's fears that his expeditions are changing history (like in Ray Bradbury's immortal classic of dino-lit, "The Sound of Thunder"), that the 20th century he returns to is not the one he left. Upon returning he carefully scrutinizes the stars, road signs, the hills on the horizon, searching for little differences that might indicate he has returned to an altered future, a similar but alien world.  This is probably my favorite element of the book, Grant's feeling that he perhaps is in a world where he doesn't belong, not merely due accidents of birth, but because of his own choices.  This is a feeling I can identify with; I have paid but little attention to current pop culture for over a decade, and when I have to spend time in doctor's offices or grocery stores, or with my family or inlaws, and see 21st century TV shows or hear 21st century music and talk about sports or politics, I feel like I am an alien in a strange and unpleasant world.

(Early in the novel Chilson gives us a clue that indicates that Grant's world is not our own: he suggests that Theodore Roosevelt was assassinated.  In real life, Teddy survived an assassination attempt and died years later in his sleep.  This brief passage added a sense of unease to the whole novel, as, in the same way Grant scanned the landscape for clues he was in the wrong 20th century, I kept expecting to discover a second clue indicating what was different between my real world and Grant's.  A cool move by Chilson.)

I was sort of expecting a sad or defiant ending, in which Grant died or elected to remain in the Mesozoic because he hated the 20th century.  Instead, in the last 35 pages of the book we learn all about Grant's secret sorrow (a failed relationship with a woman, Nona Schiereck) and he has a psychological breakthrough after getting seriously wounded.  He makes his peace with the 20th century, and starts an intimate relationship with Marian Gilmore, taking her back with him to share with her the pure natural life of the Mesozoic; we are lead to believe that they will live happily ever after, shuttling between both time periods.

I liked Shores of Kansas; it is probably about as good as we can expect a book about a dude fighting dinosaurs with an axe to be.  All the Mesozoic stuff (though I guess nowadays all the science would be considered wrong) is entertaining and the 20th century human drama isn't bad.  However, as they say, your mileage may vary: I perhaps need to include some trigger warnings for anyone considering reading this novel.  The novel's depiction of women (I guess based on crude Freudianism) is not exactly complimentary--they all want to have sex with Grant because he is famous, and are fascinated by the axe he carries with him because it is a phallic symbol.  There is also Grant's exasperated complaint about the way the news media covers women--our hero reads a newspaper article about Marian Gilmore and finds:


...a lengthy parenthesis here about how this would advance the attitudes of women towards themselves, etc., etc., the obligatory refrain over any woman who did anything.

If women's sexual desires are portrayed as shallow and simple, so are Grant's: it feels like he fell in love with Nona Schiereck and then Marian Gilmore simply because they have red hair.  (If I was Chilson's editor I would have suggested focusing a little less on the Institute's finances and a little more on Grant's love life.)  Also noteworthy is how Grant's standoffish attitude towards women leads to rumors he is gay--in a New York lavatory a homosexual wearing makeup and perfume makes aggressive advances, and Grant uses force to dissuade this ardent fan.

All in all, an enjoyable addition to the dino SF canon.  Seven out of ten pilfered sauropod eggs.  If I didn't already own way way too many books I haven't read yet, I would be interested in reading more of Chilson's work.

The page after the last page of text in my copy of Popular Library's The Shores of Kansas was torn out by a previous owner--jagged little remnants of it peek out at me from the gutter.  Though I would certainly like to see what sort of advertising was on this page, I think this vandalism is a sign of a life well-lived.  Maybe some SF fan ordered more books, using the page as a handy coupon.  Perhaps he or she tore it out to use as a shopping list on his or her next expedition to the local bookstore.  Or maybe the page was called into service as a makeshift notepad, and bore an address or phone number that opened the door to a new career or relationship for the book's owner.  Let's look on the bright side for once!
Posted by MPorcius at 8:58 PM