Tama of the Light Country by Ray Cummings

"This girl--Rowena Palisse, is she not?  By your gods, a woman worthy of mastering Mercury.  They will say, 'Croat's mate chosen from all the Universe could be no better suited to him.'  I had no idea!"

Here it is, the fifth of my reads from the Joachim Boaz wing of the MPorcius Library, the Ace 1965 printing of Tama of the Light Country, a novel by Ray Cummings that was serialized over three December issues of the weekly magazine Argosy in 1930.  I enjoyed "Aerita of the Light Country," a 1941 story set in the same universe as Cummings's Tama books that included not only space travel and gory ray gun fights but also feminism and class conflict, and have been looking forward to reading Cummings's earlier treatments of the theme of flying Mercurian girls.  This edition of Tama of the Light Country has a charming cover by Jerome Podwil, and a fun interior illustration by Jack Gaughan, as well as four pages of ads in the back that I will append to the bottom of this blog post in the interest of making widely available these fascinating primary sources of SF history.

Our narrator for the first 33 pages of Tama of the Light Country is Jack Dean, broadcast journalist!  A friend in the federal police force, Jimmy Turk, leaks to Jack that there is a big scoop up in Maine, so Jack hops in his private aircraft and flies up there from the New York studio from which he broadcasts the news of the day to Mr. and Mrs. America and all the ships at sea.  The scoop: five mysterious murders at a girls' summer camp, and the disappearance of ten girls presumably kidnapped by the assassins.  By page 17 of the 124-page book Jack has figured out what those of us who have seen the cover of the book have long known--the girls were kidnapped by honest-to-goodness space aliens!

Scientists figure out that the attack must have come from Mercury, and the world prepares for the next attack in a few months, when Mercury will again be at "inferior conjunction" (defined by Cummings as its closest approach to Earth.)  Fortunately, the Palisse family and the Bolton Society for Astronomical Research have been developing a means of space travel for years and are just about to launch their new cubical ship on its maiden voyage.  Our heroes Jack and Jimmy are aboard the Cube with "slender" and "regal" Rowena Palisse and a bunch of eggheads as it orbits the Earth for the first time and recovers a mysterious object.  This object turns out to be a small rocket bearing a message from Guy Palisse, Rowena's brother--Guy disappeared ten years ago while on the maiden voyage of space ship he invented!  The next 50 pages of Tama of the Light Country consist of the text of this message from Guy, who has been on Mercury all this time.

I was a little disappointed to find that some of the same plot elements from "Aerita of the Light Country" were prominent here in Tama of the Light Country.  I guess Cummings figured that, ten years later, people wouldn't notice or care, but for me it's only been ten days!

Anyway, the females of the civilized people of the twilight zone of Mercury (known as the "Light Country") are born with wings and can fly, but, in order to assuage a male inferiority complex, upon marriage these Mercurian girls have their wings clipped.  Nine years into Guy's stay on Mercury the girls began refusing marriage in order to keep their wings--the leader of this movement was Tama.  Frustrated by this recalcitrance, and urged on by the commander of the Light Country military, an unscrupulous dude called Roc, the government passed a new law requiring that all girls have their wings clipped at the age of sixteen.  In response, Tama and hundreds of girls, accompanied by a small number of male supporters, Earthman Guy among them, fled to the barren countryside.

Both Tama of the Light Country and "Aerita of the Light Country" feature a title character who leads an anti-wing-clipping protest movement, and both stories feature as a villain a treacherous criminal scientist who leads an army of savages from the Cold Country; in the 1941 story this role was played by Rahgg, and here in Tama of the Light Country the evil scientist is Croat, Roc's father.  (That's right, the same establishment which sent Croat into exile for his crimes put their army under the command of Croat's kid.)  Croat has built a space ship of his own and some ray guns (in defiance of Mercury's strict gun control; Roc's own government troops are armed with knives and darts they project with something like a sling or sling shot.)

Roc and Croat's forces besieged the cave system where Tama's girls were hiding out, and we get the kind of fights and sneaking around we expect in an account of a siege.  It is always day in the Light Country, of course, but luckily a powerful storm rolled in that facilitated all the sneaking around behind enemy lines that are needed to move the plot forward.  (Another of the similarities between this 1930 Mercurian tale and the 1941 one I read last week is Cummings's long descriptions of the dramatic Mercurian weather.)  Tama and Guy eavesdropped on Croat and Roc, and learned of Croat's plan to fly to Earth to kidnap Guy's sister Rowena and some other wingless Earthgirls to be his and his minions' wives.  (The women of the Cold Country, it seems, are ugly.)  Guy, who had managed to smuggle his little messenger rocket out of the capital city, wrote this 50-page warning and launched it into Earth orbit in hopes Rowena and the Bolton Society for Astronomical Research would retrieve and read it.  They have, but, unfortunately, only after Croat's raid.

The Bolton people quickly load their Cube up with supplies and weapons and Rowena, Jack, Jimmy, and the Bolton scientists take off for Mercury to help Guy and attack Croat's ship before he can launch his second raid.  But Croat has outsmarted them!  Croat was left on Earth after the raid, and his ship has been hiding behind the moon!  Croat stowed away on the Cube before liftoff, and, near the orbit of the moon, he grabs Rowena as a hostage (and future bride!) and radios his ship!  The Mercurian vessel approaches and, in space suits, Croat and Rowena go out the Cube's airlock.
Croat's plans are scuppered when Jack puts on a space suit and jumps out after them and out-wrestles Croat (Earthmen are stronger than Mercurians.)  As for Croat's ship, it was carrying Guy and Tama captive after they stowed aboard on Mercury, and in the confusion they escape and kill the criminals and savages aboard it and wreck the ship; they then fly in its boat to join the Cube.

Tama of the Light Country is an acceptable adventure story but it has some "issues" that we might characterize as problems.  For one thing, there are too many characters, especially for a novel only 124 pages long, and only one of them is really interesting.  Tama, even though she is the title character, has a quite small part.  The Earthman hero role is divided between Guy and Jack, and neither one of them is a particularly interesting person.  I don't even know why Jimmy is in there.  If I was co-writing this novel I would have gotten rid of Jimmy, combined Guy and Jack, combined Croat and Roc, and made the human interest part of the story revolve around the hero's having to choose between Rowena, the smart Earthwoman who shares his love of science and his cultural background, and Tama, the exotic and bold beauty from another world.

The sole interesting person in the novel, of course, is Croat the evil scientist.  He's the one who makes big plans and takes big risks and his adventure on Earth--avoiding capture, familiarizing himself with our society, stealing an aircraft so he can travel from Maine to New Jersey to sneak aboard the Bolton Cube--is the most compelling part of the novel.  Cummings even makes a big deal about his cremation when his dead body burns up in the Earth's atmosphere.  This is a phenomena I regularly observe in genre fiction, that the bad guy is more fun than the hero.  If I was co-writing this novel I would have expanded Croat's part and had him try to seduce Rowena with a lot of talk about how she could be his partner in ruling a technocratic utopia based on science before he resorted to treating her like a Sabine.

We'll be reading the second Tama book for our next blog post; maybe Tama will take center stage in that one!

The four pages at the end of Tama of the Light Country provide valuable insight into the extensive line of Ace books available in 1965 about hitting people with swords and shooting them with energy guns.  The perhaps-not-quite-legal Ace edition of Lord of the Rings gets a full page ad which includes gushing praise for the trilogy from Anthony Boucher.  Andre Norton also gets a full page of her own.

There are also two pages listing "Classics of Great Science-Fiction" and "recent releases" from Ace.  I own and/or have read a few of these.  I own the very edition of Edmond Hamilton's Crashing Suns listed, and read about half the stories included therein.  I own the listed editions of Maza of the Moon and A Brand New World but have not read them yet.  I read a 1959 hardcover edition of Journey to the Centre of the Earth when I was a kid and just last week my brother was joking about how disappointed I was that there wasn't more dinosaur material.  (As a kid I thought all fiction should be like The Empire Strikes Back and Gamera vs Guiron, nonstop monsters and violence.)  I am a fan of Henry Kuttner and C. L. Moore, but when I read The Well of the Worlds, The Dark World, and Earth's Last Citadel I wasn't crazy about them.  I own a Mayflower Dell edition of Behold the Stars and thought it one of Ken Bulmer's better books, with an interesting take on space travel and space warfare.  The Jack Vance Ace Double listed, Monsters in Orbit and The World Between, includes some very entertaining stories, including the brilliant "The Moon Moth" and "Abercrombie Station." 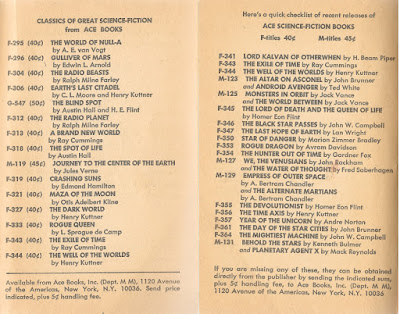 If you have any opinions about the Ace 1965 line don't hesitate to share them in the comments!
Posted by MPorcius at 10:02 PM