"Crashing Suns," "The Star-Stealers" and "Within the Nebula" by Edmond Hamilton

A year ago we served in a mind-blowing star-smashing intergalactic space war involving snake people, gas people, and a multicultural space navy from our own Milky Way when we read the 1964 printing of Edmond Hamilton's 1929 novel Outside the Universe. Outside the Universe sold so well, super-editor Donald A. Wollheim tells us, that Ace decided to put out more of Hamilton's 1920s and 1930s tales of the Interstellar Patrol, and in 1965 presented to the space-opera-loving public Ace F-319, Crashing Suns. Crashing Suns includes five stories by Ohio-native Hamilton plus a short intro by Wollheim (in which he brags about the "evident success" of Outside the Universe I mentioned above) and a fun interior illustration by Jack Gaughan.  Over the last week or so, between driving hundreds of miles across America's vast Middle West and visiting my wife's friends and family (lots of staring vacantly into space while they discussed sports and local gossip, but also a chance to watch a spaghetti Western with my mother-in-law), I read three of these stories, each of which first appeared in the famed genre magazine Weird Tales.

This story, which isfdb informs us is the first component of Hamilton's Interstellar Patrol series (Outside the Universe is the fourth), is over 40 pages long, and was published across two issues of Weird Tales. 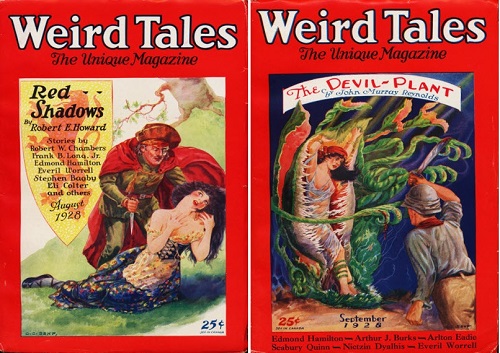 It is one hundred thousand years in the future, and mankind has colonized the entire solar system. Our narrator, Jan Tor, captain of the "long, fishlike" Interplanetary Patrol Cruiser 79388, is summoned to Earth, to the Hall of Planets, the seat of the system's government.  The Chairman of the Supreme Council has bad news: in one year's time a star is going to collide with Sol, and the explosion will exterminate all of humanity! Luckily, one of Jan Tor's old friends, genius scientist Serto Sen, has just invented a new kind of space drive which permits travel at the speed of light.  Jan Tor is given command of the human race's first light speed vessel, a little ten-man job, and sent on a mission to investigate this mysteriously genocidal ball o' gas.

The plot of "Crashing Suns" is broadly similar to that of Outside the Universe.  Jan Tor and company get captured by spherical pink aliens and learn that these creeps' sun is worn out, and that they hope to rejuvenate it by crashing it into Sol. Hamilton gives us some horror scenes while Jan Tor and friends are in captivity, then they escape to Earth, where a fleet of 1000 light speed ships has been built.  Jan Tor is given command of this human armada, and he leads it in a tremendous naval battle against the pink spheres' navy, but it is another invention of Serto Sen's, a ray projector which redirects the alien sun, that saves human civilization.  It is the scientist, not the fighting man, who is the real hero of the story, and the last paragraphs of the tale look forward to the colonization of the galaxy by the human race, an heroic destiny made possible by Serto Sen's light speed drive.

This story takes place some two hundred thousand years in the future. The Earth is now a member of the Federation of Stars which includes all the intelligent species of the galaxy, and our narrator is Ran Rarak, captain of a “long cigarlike” cruiser capable of travel one thousand times the speed of Serto Sen's light speed ship.   Ran Rarak’s ship is called away from its duty as a component of the Interstellar Patrol’s fleet to Neptune, where Ran Rarak gets terrible news: from out of the black depths of intergalactic space a burned out star is rushing towards Sol! This black star is over a million times the size of our Sun, and if it enters our solar system human civilization will be devastated by its tremendous gravitational pull! Ran Rarak is given command of a fleet of fifty ships manned by scientists and engineers and sent off to try to divert this black star of doom from its genocidal course!

The plot of “The Star-Stealers” follows that of “Crashing Suns” so closely as to feel like a revision of that story. Ran Rarak and his friends are captured by the inhabitants of the dead star, tentacle monsters who live in pyramidal cities. There we are treated to a scene of horror, and learn that the tentacle people’s dying star will soon be so cold that survival on its surface will be impossible.  The hope of these fiends is that they can direct their dead sun close enough to Sol that our sun will be pulled into orbit around the black star and carried off. The tentacle peeps even plan to use their high technology to throw Earth and the other planets into Sol as additional fuel!

Fortunately, weeks after they were captured, Ran Rarak and his comrades (including Dal Nara, his female second-in-command) escape their prison, and at the same time the Federation Navy shows up to destroy the tentacle peeps' navy and clear the way for Ran Rarak to deactivate the ray that is directing the black star’s course, saving our system. 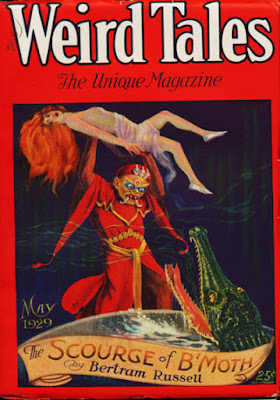 Our narrator for this caper isn’t a naval officer, but a politician, Ker Kal, Sol’s representative to the Federation’s council at Canopus. Is this story going to be about fraudulent universities, corrupt foundations, hacked e-mails and conflicts of interest? Hell, no! This story is about the dangers posed by genocidal nebulas!

In this story a nebula is a blob of burning gas too hot for a spaceship to enter. The cyclops who is the Chief of the Federation council explains to the assembled representatives that the huge nebula at the center of the Milky Way Galaxy has begun to spin and will soon explode; the burning gas ejected by such an explosion will exterminate all life in the galaxy! Luckily, scientists have just invented a material that can withstand the infernal heat of a nebula and built a spaceship out of it!

The new nebula-resistant ship can only carry three people, and our man Ker Kal is one of the representatives selected for the dangerous mission of figuring out what the heck is up with that spinning nebula and if there is anything we can do about it. He is accompanied by a plant man from Capella and a tentacle person from Arcturus; these three politicians fly to the peaceful inner eye of the fiery nebula storm and discover a titanic planet, sheathed in artificial metal plates.

Inside this planet our heroes are captured by hideous amoeba men! They endure scenes of horror, and learn the secret of the nebula’s instability: the nebula was contracting and threatening the survival of the amoeba people’s world, so they developed technology to spin the nebula and make it explode outwardly. Our heroes escape their prison and fight their way to the ray that is making the nebula spin and deactivate it. As our heroes blast away in their ship, the nebula collapses on the metal-skinned planet, exterminating the amoeba people whose manipulations were about to annihilate all other life in the Milky Way.  Ah, the ironies of practical astrophysics!

I like all three of these stories, though there is no denying that they are trifling escapism with flat characters; we learn far more about astronomy and technology than people's feelings or personalities. For example, I don't think Hamilton produces an in-story reason or a literary reason why it is representatives of the council instead of the customary naval officers, scientists and engineers who crew the nebula investigation ship; it's not like there is a scene of one of them using his baby-kissing powers or ability to lie to his constituents to resolve some plot obstacle.

Hamilton comes up with some fun technology: conventional space ships don't use rockets, but instead "gravity-screens" that act like the cavorite sheets in H. G. Wells' First Men in the Moon, while Serto Sen's new ship uses "etheric vibration-generators."  Solar power collectors and transmitters are used to turn barren Neptune into a green forested world.  Long range communication is via the "telestereo," which produces a "lifesize and moving and stereoscopically perfect image" of the person on the other end of the line.

There are also striking images, like the pyramid city on the dark star, where light comes not from the sky but from radioactive minerals in the star’s surface, the amoeba people who communicate by twisting their bodies rapidly into different shapes, and the massed traffic of commercial, military and pleasure ships that surrounds each Federation planet. The dreadful hand-to-hand fights with sickening aliens and the horror elements also work.

Of course there are all kinds of science lacunae (travelling at 1000x light speed has no unusual effects) and certified boners, like how the humans insouciantly walk on the surface of the dark star, even though Hamilton keeps telling us it is “millions of times larger than our own fiery sun” and has astoundingly powerful gravity.  If you are going to read lots of SF you just have to learn to shrug this sort of thing off.

The real problem with these tales is that all three of them are essentially the same, following almost exactly the same formula. People who read these stories as they appeared in Weird Tales back in the late ‘20s would have read each several months after reading its predecessor, and so probably were not quite as distracted by their similarities as was I, who read them all in the space of a few days.  With this in mind, I think I will put off reading the other two stories of the Interstellar Patrol in my copy of Crashing Suns, “The Comet Drivers” and "The Cosmic Cloud,” both of which appeared in Weird Tales in 1930, for a while.
Posted by MPorcius at 9:45 PM