Doomsman by Harlan Ellison and Thief of Thoth by Lin Carter 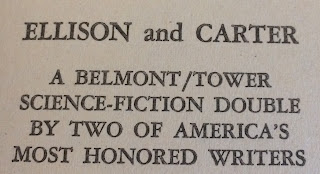 Lin Carter has been on my mind recently; he came up in a twitter conversation during my recent visit to Chicago, where everywhere I went I was confronted with mysterious flags with a "W" on them, and then, despite my assertion that I didn't think Carter was a particularly good writer, I bought a copy of Carter's Invisible Death because of the cool Don Maitz cover.  A few days later, Harlan Ellison was brought to mind by Barry Malzberg's comments about him in 1976's The Best of Barry N. Malzberg.  I took all this as a sign that it was time to read my copy of BT50244, a slim volume printed in 1972 that includes Ellison's 1967 "Doomsman" and Carter's 1968 "The Thief of Thoth."  This curious publication, a Belmont/Tower Science-Fiction Double, was previously in the collection of a Shan, as indicated by the bold print on the green page edges. The odd little book is bereft of page numbers and heralds Ellison and Carter as two of America's most honored writers.

"Doomsman," which is like 68 pages long, first appeared in an earlier Belmont double whose cover illo makes it look like a thrilling tale of SF violence.  Violence and dames! [UPDATE, November 5, 2016: In the comments, ukjarry sheds light on the history of "Doomsman," pointing out an earlier publication and a source of inspiration for Ellison!]

In the year 2179 the Americas are, in theory, united under the rule of a single ruthless authoritarian government.  In reality, all over the New World there are upstarts, rebel groups and petty barons who threaten the government's authority on the local and regional level.  The central government lacks the resources to field a military establishment commensurate with the task of suppressing all these troublemakers, so instead they maintain a cadre of assassins trained at a secret academy hidden in the Rocky Mountains.  One of the bizarro world Harry Potters attending this school is Juanito Montoya, a feral boy from the Argentine wilderness, dragged to the Rockies to bend to use of the government the skills he learned while living as the Mowgli of the Pampas!

Mind probes at the assassins' school suggest that Juanito is the son of one of those very upstart lords the school for murder was created to deal with!  Juanito, who cannot clearly recall his early childhood, is determined to escape his service to the state his father rebelled against and figure out the truth about his heritage.  Suspecting a clue awaits him in the white north, Juanito wangles an assignment to Alaska, where the government forces have their hands full fighting the mongrel descendants of the local Eskimos and a Soviet-Chinese "horror battalion" which invaded the 49th state during World War III!  Then it's off to Chicago, where he encounters a hideous dwarf and liberates from the midget rapist's torture dungeon a woman who can lead him to his dad.

Maybe "liberates" isn't the word...Juanito seizes her, confines her, threatens her and tortures her until she leads him to his father's secret city on the bottom of the Pacific.  Juanito's father will soon lead the petty barons in a revolution against the government and bring a new order of peace and justice, and Juanito hopes to join this new order.  But, because of what the government has done to Juanito's body (implanted into his skull a booby trap that will kill his father) and his soul (demonstrated by his treatment of that female captive, who turns out to be his sister), he is incompatible with the new order--men like him must be destroyed if the new order is to flourish!

Ellison's writing isn't subtle or elegant, it is loud and fast, feverish, with metaphors like "the fear mounted in him like a crazy red monkey" and all kinds of extravagant, over-the-top action.  The reader witnesses a heaping helping of horrific torture and sickening violence, all elaborately described.  There's also plenty of high tech science fiction devices, traditional ones like energy guns, forcefields, and vibroknives, and a few that are somewhat more original.

Is "Doomsman" a commentary on the use by the United States of unsavoury methods in its prosecution of the Cold War?  (Near the end of the story Ellison warns us that sometimes means cannot be justified by ends.)  An ultraviolent exploitation story quickly banged out by Ellison for some money?  A parody of violent adventure fiction?  (It brought to mind Norman Spinrad's Men in the Jungle.)  Whatever the case, it's a brisk engaging read, though it is so yucky, what with the eye-gougings and dismemberings, that I am reluctant to call it "fun."  Moderate recommendation.

Like the Ellison story, Carter's "The Thief of Thoth" was first printed in an earlier Belmont double, and it also has an exciting cover; this one shows an astronaut absconding with some king's crown, jumping into his rocket as a horde of creepos nips at his heels (it brings to mind the opening sequence of the first Indiana Jones movie.)  "The Thief of Thoth" is somewhat longer than "Doomsman," occupying maybe ten more pages and being printed in a smaller font.

The main character of "The Thief of Thoth" is Ser Hautley Quicksilver, a "Licensed Legal Criminal and Confidential Agent" of the far future.  The idea of the government formally giving someone a license to defy its authority and despoil its citizens is a curious one, and if the story was written later I might have thought it a satirical reference to Richard Nixon (Watergate), Teddy Kennedy (Chappaquiddick) or the Clintons (check your local paper for the latest outrage), but seeing as the story predates all those lamentable events, I am going to guess Ser Hautley's license to murder and steal is just a silly joke or something akin to James Bond's license to kill, a talismanic embodiment of the ordinary man's wish for total freedom from responsibility.

"The Thief of Thoth" reads like a pastiche, homage or imitation of Jack Vance.  Like several Vance characters (Magnus Ridolph and Miro Hetzel spring to mind), Quicksilver is kind of like a private eye, and he has gotten rich accepting commissions to undertake risky jobs, though in Ser Hautley's case these seem to mostly be burglary and assassination jobs (I suspect Ser Hautley's personality is based on Vance's Cugel the Clever, an amoral type with an inflated ego.)  Our hero lives on a tiny planetoid protected by a cloud of asteroids; only Ser Hautley can navigate the swarm.  Over the course of a single day Ser Hautley is approached by three potential clients, all of whom want him to steal an artifact of the extinct race of reptile people of planet Thoth.  The artifact, a jewel-encrusted crown, is protected by a cult of human colonists and their subterranean maze of death traps.

Like numerous Vance books, "The Thief of Thoth" is set in a galaxy of many settled planets in which interstellar travel and communication are trivial, where people wear elaborate clothes and dye their skin unusual colors, read lots of newspapers and magazines, and eat weird complicated food.  After the three interviews, Ser Hautley flies over 1000 light years in less than two hours, to the Thieves' Planet where he dons a high tech disguise and seeks an audience with the one man, a master burglar, who has tangled with the cult of Thoth and lived to tell the tale.  (Reminding me of Barry Malzberg's oeuvre, a firm on the Thieves' Planet offers dream therapy in which you can murder and rape people, while another establishment can construct androids for you to "murder" that look exactly like your parents.)  A clue turns up that directs our hero to Earth, where he wears a different disguise.

The tone of "The Thief of Thoth" is comical (e. g., the author includes jocular references to two other prominent SF editor/critic/historians, naming a planet "Wollheim," and an alcoholic beverage "Moskowitz"), and Carter ratchets up the level of silly jokes during the Earth scenes, describing Earth as a primitive backwater where nothing interesting has ever happened and so on.  "The Thief of Thoth" also has characteristics of a shaggy dog story: Ser Hautley never gets the info he wants from the burglar, so his trips to Thieves' Planet and Earth were essentially a waste of time. But Ser Hautley still makes it to Thoth, and resolves the plot through the use of devices which confer invisibility.  (Carter stuffs the story with high tech spy devices until it is close to bursting.)  It turns out everybody wants the crown because it contains microdata plans for revolutionary weapons systems that will give whoever has them the ability to easily master the universe; the Thoth cultists, however, have figured out a way to keep the data from prying eyes, so galactic stability is secure for now.

This story is silly and trifling.  It is not offensively bad, but I'd be hard-pressed to recommend it.  Carter seems like a guy utterly devoted to SF who had a lot of fun writing "The Thief of Thoth," and I admire his dedication and enthusiasm, but I can't say that I found his sense of fun infectious.

If you are a big fan of Ellison and/or Carter it would make sense for you to get a copy of this Belmont/Tower Double, as I don't think these stories are widely available.  Since the stories are sort of ordinary, however, general readers should feel no need to go out of their way to acquire a copy....unless you love old advertisements!

At the end of BT50244 there are six pages of ads for books, but none are SF books!  There's a consumer's guide to marijuana, a home buyer's guide, a book on childbirth recommended by an anthropologist, a cookbook, a history of the Sahara desert, a western and a gothic romance.  I guess Belmont/Tower had their hand in every market!