"That man touched me, and that's all I'm left with: God is love, and you must do unto others as you would have them do unto you." 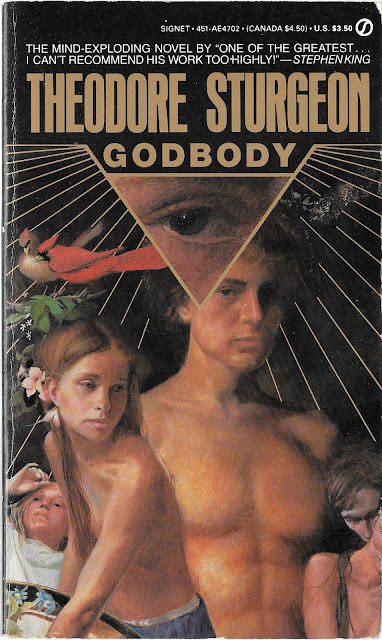 You'll remember Theodore Sturgeon. He warned us of the dangers of construction equipment animated by non-carbon-based life forms.  He blamed all of our society's problems on the incest taboo. He called Robert Heinlein's novel about a girl who loved babies and her 11-year old libertarian philosopher of a brother ("Anything that is moral for a group to do is moral for one person to do") "a slam-bang of adventure."  Like my mother, he thinks a secret conspiracy is preventing the distribution of a cure for cancer.  In 1985 Sturgeon died, and 1986 saw publication of his last novel, Godbody.

In 1986 I was fifteen years old and constantly thinking about sex.  In that pre-internet age I had no access to pornography and girls found me repellant, so everything I knew about sex I learned from encyclopedias and SF novels.  A hardcover copy of Godbody borrowed from the public library was one component of my self-directed course of sex education.  I remember being excited that the thing started off with a sex scene (slam-bang, indeed) but I also remember being bored by the rest of the book. This week I read a recently acquired 1987 paperback edition of the novel, one covered with ecstatic blurbs from Stephen King and others, curious to see how an MPorcius three decades older would feel about the novel.

Godbody is a story in nine chapters, the first eight first-person narratives, each in the voice of a different character, the ninth chapter a third-person omniscient narrative.  In the first chapter a minister spots a naked man as he is driving through the country. The naked man is perfectly beautiful, and touches the minister on the shoulder before departing.  The touch of the strange man, who calls himself "Godbody," excites something in the minister, who drives home and has the best sex of his life with his wife.  In the past, minister and wife had sex in the dark, silently, only when he felt the need for release, but this time their lovemaking is an outpouring of desire, performed in the sunlight, and both loudly cry out during their orgasms.  Their sex is an expression of love, in fact, a transcendent religious experience. 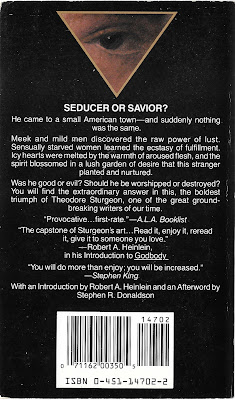 That first chapter sets the tone and tells the reader the point of the novel: sex is something to be open and proud about, an expression of love and joy to be unashamedly indulged in, the key to a happy life and a happy society.  The second chapter relates the same events from the point of view of the wife.  In the third chapter a sadistic womanizer tries to rape a female nudist hermit artist who lives on the edge of town; Godbody rescues her, and in the fourth chapter we see how Godbody and the artist met earlier and had sex.  In the next four sections we see, through the eyes of four additional characters, how a greedy banker and the prudish gossip who manages the local rag control the little town, largely through the manipulation of the sadist and a corrupt cop.  Godbody reforms the rapist, banker and cop, and the gossip shoots Godbody dead.

In the final, third-person, chapter, the minister gives a sermon about how the modern church and its rituals are a guilt-inducing travesty radically unlike the informal and love-focused meetings of the church in the first few decades after the death of Christ. He resigns his post and is followed by a group of believers in the new gospel of love, sex and nudity inspired by the example and supernatural powers of Godbody.  In the final pages of the book we learn that, like Jesus, Godbody was interred in a cave behind a boulder, and has come back to life and vacated his tomb.  The last scene sees a risen Godbody curing the blindness of a young girl. 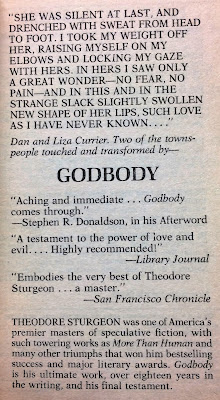 Obviously a book which includes page after page of explicit sex scenes that cater to voyeuristic and sadomasochistic fetishes is not for everybody, and some will be skeptical of the central role in life that Sturgeon attributes to sex, how he suggests that human evil is the result of sexual dysfunction and sexual repression and that sexual liberation and sexual exuberance are the key to a better society.  (I think in my academic days we would have complained that such a theory was too "reductive.")  The stuff about how a judgmental gossip runs the town via blackmail and her column about local people's real or fictional sexual peccadillos feels a little tired, like "All About Eve" or "Peyton Place" or something.  (As a kid I no doubt found this theme to be the lamest sort of soap opera tedium.)  And of course the potted history of early Christianity and the reenactment of Christ's resurrection is a little goofy and potentially offensive to some.

Still, I think this novel is pretty good, better than I had expected; Stephen King and Robert Heinlein are not exaggerating as much as I thought they must be when I first read their extravagant blurbs.  Sturgeon is a good writer, and the story moves along smoothly; all the sentences and images are good, and each character has a distinctive voice and personality, and is interesting in his or her own way.  Some of the blurbs suggest Godbody is the ultimate Sturgeon work, his masterpiece, and I think there is something to that: Sturgeon has made these same points again and again in earlier works, but many of those stories and novels put me off with their elitism, preachiness, bitterness, and tendentiousness.  Godbody is more tender and more pleasant, and makes its points with plots and subplots about the growth and change of people with psychological and relationship problems; it doesn't feel like a bunch of hippy lectures or angry young man diatribes, but like a skillfully composed modern novel.

I bought Godbody in September expecting to find it so silly I would laugh at it, but I was wrong: thumbs up!  If you are writing your dissertation on sex and/or religion in SF, this is a must have. 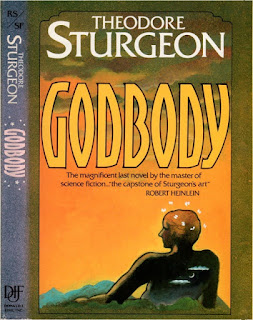 As an introduction, Godbody includes an essay of a dozen pages by Robert Heinlein, "Agape and Eros: The Art of Theodore Sturgeon."  People interested in Heinlein and/or Sturgeon and Golden Age SF should really check out the essay, which is also available in the third volume of The Complete Stories of Theodore Sturgeon and the second volume of The Non-Fiction of Robert Heinlein.  In this vale of tears it is a pleasure to read a guy's quite sincere description of how great his friend was and how much he liked him, and, perhaps more usefully, Heinlein also passes along all kinds of anecdotes about Sturgeon in the 1940s, what he looked like, how he acted, the parties and meetings they attended together with other SF writers, etc.  A fun little look into classic SF history.

The three-page Afterword by Stephen Donaldson, while less engaging, is also worth reading, especially if you are interested in Donaldson; besides praising Sturgeon to the skies, Donaldson talks about his own early life, the first three SF books he ever read, and his own beliefs.
Posted by MPorcius at 5:19 PM