"I want Tama, that is all.  Your Earth does not interest me.  I never liked my father's plan to populate Mercury with your Earthwomen.  But the virgins of the Light Country are rebellious.  They fly off in revolt if one crosses them." 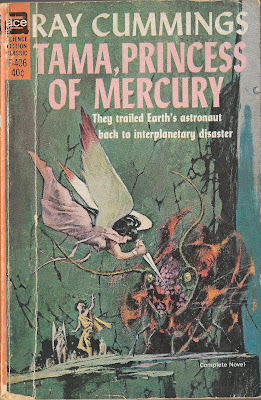 Less than a year after publishing Tama of the Light Country in late 1930, Argosy presented to its readers the sequel to Ray Cummings's tale of Mercurian winged girls and interplanetary kidnappers, Tama, Princess of Mercury.  There was no talk of Tama having royal blood in that earlier novel, and I actually thought that book afforded Tama less screen time than three or four other characters, so let's check out the 1966 Ace book printing of Tama, Princess of Mercury, and see if Tama is going to get some kind of promotion.  My copy of Ace F-406 was one of the five Ray Cummings books donated to the MPorcius Library recently by Joachim Boaz, and has an interior illo by Jack Gaughan and a cool cover by Jerome Podwil.  (I'm looking forward to seeing Tama fight that bizarre monster!)

Tama, Princess of Mercury picks up the Tama saga some months after the events of Tama of the Light Country.  Journalist Jack Dean and scientific assistant Rowena Palisse ("a very tall girl, with the regal aspect of a Nordic queen") have been married, and Tama of Mercury, leader of the rebellious winged girls of Mercury, and inventor Guy Palisse are engaged--they will be married on Mercury once the inferior conjunction arrives and Bolton Industries' Flying Cube whisks them thither.  Our cast of characters is hanging out in a cabin in the woods, looking forward to boarding the Cube in a week, when a Mercurian spacecraft ("a huge silver ball, thirty feet or so in diameter") appears and carries off Rowena and Tama!

Jack, Guy, and some minor characters rush to Bolton Industries in New Jersey (yay!), board the Cube and take off after the raiders.

In a two chapter flashback we learn that Roc, son of Croat, is in command of the silver ball, and he figured out where our heroes were relaxing by kidnapping Jimmy Turk and using a truth drug on him.  Jimmy is a federal cop and Jack's best friend--like most federal workers Jimmy spends much of his time leaking scoops to the media, in Jimmy's case, our hero and narrator, Jack. 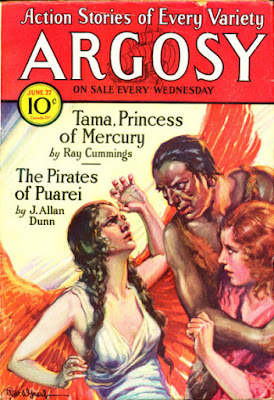 The Cube catches up to the Mercurian space boat, but because Tama, Rowena, and Jimmy are aboard the sphere, the Earthlings can't just blast it out of the ether.  So Jack spacewalks over to negotiate, and finds himself in the middle of a tense situation!  You see, Roc is not the man his father was.  Croat built up an army of Cold Country savages to conquer his native Light Country, from which he had been exiled for his crimes.  Jack killed Croat in the last book, and Roc has taken up his dad's plans of conquest--his major modification to the plan involves making Tama, winged beauty and leading political activist of the Light Country, his queen--he has been in love with Tama for years.  However, the Cold Country peeps don't respect Roc, and Roc expects that the eight savages he has aboard the sphere are going to mutiny and kill him as soon as they get back home (the savages don't know how to operate the boat in outer space, so need Roc's technical expertise until they hit the atmosphere of Mercury.)  Roc allies with the Earthlings and Tama against the dangerous barbarians.  Adding additional complexity to this ticklish situation, the chieftain of the savage people of the Cold Country, Dorrek, is on the boat and has fallen in love with Rowena and this is driving Dorrek's Mercurian girlfriend, Muta, who is ugly like all Cold Country women, violent with a jealous rage.  (Readers of "Aerita of the Light Country" may remember that there was a similar love triangle on a space ship in that 1941 Mercurian story--Cummings was an early devotee of the cult of "reuse and recycle!")

When the two spacecraft get to Mercury they find that the Cold Country barbarians, in the absence of Roc and Dorrek's leadership, have launched their invasion of the Light Country early.  A fight breaks out inside the sphere and Tama, Roc and Jimmy escape into a provincial city devastated by the murderous barbarians--Cummings really goes to town describing gruesome wounds and dead bodies and ruined buildings, and a fight between Tama and friends and one of the giant insects that accompanies the savages' army is quite gory.  Roc is knocked unconscious and Jimmy suffers a broken leg, but Guy and some minor characters from the Cube arrive just in time to help Tama overcome the huge beast.

Newlyweds Jack and Rowena are still on the sphere with Dorrek and Muta, which Dorrek directs into the eternal night of the Cold Country to prepare for the next phase of the barbarian invasion.  Rather than wait for the barbarians to march on them, the people of the Light Country, their force augmented by the Earthlings and their Flying Cube, attack Dorrek's camp.  Cummings does a decent job with the battle, which features interesting ray artillery and defensive countermeasures on both sides, the flying girls on the Light Country side and the giant earthbound bugs on the Cold Country side, and lots of sneaking around behind enemy lines on the parts of our heroes.  Jimmy even manages to fight despite his broken leg (we are told the low Mercurian gravity facilitiates this feat of heroism), and we witness the final fates of the duplicitous Roc and Muta.  Lots of Mercurians get killed; Cummings, like so many creators of fiction, seems to be appealing to people's fascination with blood and death at the same time he makes an anti-war statement.

In the end the Cold Country army is wiped out and Guy and Tama get married.  Narrator Jack Dean suggests that a new era of interplanetary travel is about to begin, but we who have read "Aerita of the Light Country" know that this did not happen.

Not a bad planetary adventure story, though not as good as Burroughs or Brackett or Hamilton--but better than Lin Carter.  There are too many bland characters; to my mind, this kind of material works better with a single remarkable character, like John Carter or Eric John Stark.  It is strange that Tama, the title character, is just one of three or five equally important characters, but I guess the titles of these Tama books are a marketing ploy, meant to remind readers of the first Barsoom book, A Princess of Mars, and such succeeding volumes as Thuvia, Maid of Mars.