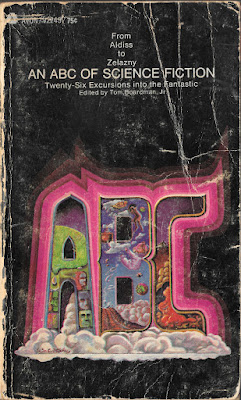 When I haphazardly reorganized my SF anthologies a few days ago I put aside five paperbacks containing stories by authors who interest me but which I didn't recall having read, so our next batch of posts will each tackle a selection of stories from one of those five books.  First up, a 1968 Avon paperback printing of the 1966 anthology An ABC of Science Fiction, edited by Tom Boardman, Jr.

An ABC of Science Fiction was constructed based on a goofy premise: it includes 26 stories, each by a different author, each writer the sole representative of those with his last initial.  To make this idea work somebody had to contribute something under the pseudonym "B. T. H. Xerxes" to fill in the "X" slot; "Xerxes" came up with half a page of limp limericks, and isfdb suggests it was likely Boardman himself who penned the ribald verses, or perhaps Brian Aldiss, who was already doing duty in the "A" stall.  Today we'll look at the stories by the delegates from the honorable letters A, B, C and D, Aldiss, Fredric Brown, Arthur C. Clarke, and Avram Davidson.

Aldiss's offering first appeared in an issue of Science Fantasy alongside stories by E. C. Tubb and J. G. Ballard, and has been beloved by editors ever since, appearing in ten different periodicals, anthologies and collections since then. 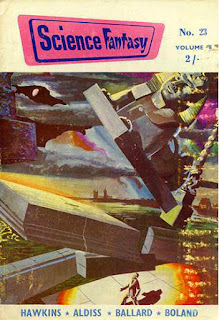 "Let's Be Frank" is a fresh take on the collective consciousness concept we see so often.  In Tudor England, Sir Frank Gladwebb's wife gives birth to an odd child, a boy who remains in a coma until he is nineteen.  At that age he awakens, looks into his father's eyes, and Sir Frank finds that his consciousness has expanded into his son's body--Sir Frank has control of both bodies as effortlessly as you or I have control of both our hands!  When Sir Frank's son Frank has a child of his own, Sir Frank finds that his consciousness expands to inhabit the body of his grandson and he now has control of three bodies.  As the decades and then centuries pass, the number of "Franks" increases, gender and ethnic differences proving to be no barrier!  Will the single consciousness of Frank spread to include every person on Earth, and then colonize the universe?

This is an idea story, and because the idea is new and compelling and Aldiss has a good writing style, I quite liked "Let's Be Frank." 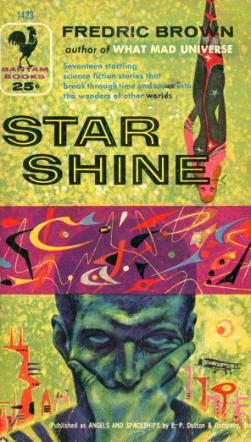 Fredric Brown has been on my mind recently after seeing an announcement that his autobiographical novel The Office is being reprinted by the good people at Makeshift Press.  You'll remember I enjoyed his novel Rogue in Space and his story "Puppet Show."

It looks like "Pattern" first appeared in a hardcover collection entitled Angels and Spaceships.  When Angels and Spaceships was released in paperback it was retitled Star Shine and adorned with a beautiful Richard Powers cover featuring not only Powers's famous abstractions but a brilliant and expressive realistic male face and hand, as well as a slinky stylized female silhouette and a biplane.  Gorgeous!

"Pattern" is a story that takes up one page, a piece of gimmicky filler.  Lots of people like this kind of thing, but I generally find these types of stories an irritating waste of time.  Anyway, in this one, mile-tall aliens land on Earth and a woman thinks they are harmless as they totally ignore us.  Then, while she is spraying insecticide on her garden, the aliens themselves start spraying something in the air high above--is the Earth the aliens' new garden and we humans mere pests minutes away from extinction? 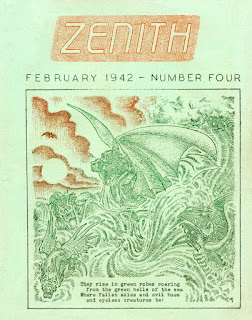 isfdb is telling me that "The Awakening" appeared first in the fanzine Zenith in 1942, but then was published in a "somewhat different form...significantly revised," in Future Science Fiction Stories ten years later.  Zenith was the labor of love of British artist and SF fan Harry Turner; read all about Turner here and read all six issues of Zenith here.  I like Turner's art deco-style renderings of nudes, space craft, and Egyptian and Near Eastern bric-a-brac for Zenith and for other people's fanzines; his later work seems to consist largely of optical illusions and "impossible objects" that are reminding me of M.C. Escher.  (I find that kind of thing to be a sterile and lifeless drag, mere mathematical trickery.)

It is the future!  Mankind has conquered the solar system and built a Utopia!  But Utopia is a bore and many people are committing suicide!  Marlan declines to go the Kervorkian route, and instead does what Galos Gann did in Edmond Hamilton's 1936 story "At the World's Dusk," and Professor Jameson did in Neil R. Jones's 1931 story "The Jameson Satellite": put himself in suspended animation to be awakened in millions of years!  When Marlan wakes up we get our twist ending--man is gone and insect people have taken over the solar system!

This story is just OK, its surprise underwhelming.  I guess you could call it juvenilia. 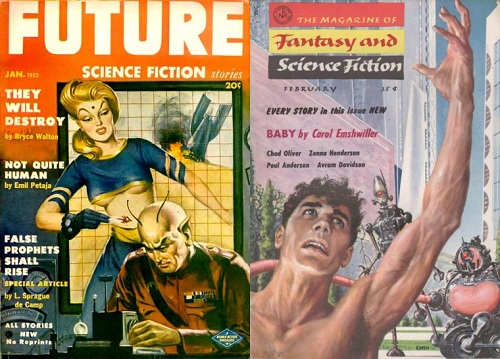 Davidson is something of a stylist, and he includes lots of cute names and jocular wordplay and reworked cliches in the 20th-century beginning of "I Do Not Hear You, Sir," which first appeared in F&SF.  The story begins like a crime story--Milo Anderson is a crook who is in debt to more powerful crooks ("the Syndicate") and needs money fast.  He recently swindled a collector of 18th-century objets d'art out of numerous pieces, and is scrambling to find something to sell among the stolen goods when he stumbles upon what appears to be a working circa 1770 telephone complete with a little telephone directory.  The directory is titled, "The Compendium of the Names, Residences, & Cyphers of the Honorable & Worthy Patrons of the Magnetickal Intelligence Engine;" the gag in the second half of "I Do Not Hear You, Sir" is Davidson's comedic reproduction of late 18th-century speech and writing and caricatures of War of Independence-era worthies like George Washington, Benjamin Franklin and Benedict Arnold, all of whom Milo calls on the phone, looking for help.  Nobody is interested in helping Milo, save Arnold, who transmits through time and space a little box to Milo--it contains pills with which to commit suicide.

"I Do Not Hear You, Sir," strikes me as quite similar to other Davidson short stories I have read; I guess this is a good example of what people who like Davidson like about him, the in-your-face wordsmithery and erudition and assumption of various distinctive voices.  Some people will find jokes which consist of the American Cincinnatus complaining about his false teeth and the author of Poor Richard's Almanac telemarketing Fanny Hill amusing, but while the style shows a lot of ambition, education and verve on the part of Davidson, the tale has no emotional content and the plot is contrived and nonsensical, so I didn't find it compelling or entertaining.  (I find it easier to admire this sort of thing than to actually enjoy it.)  Thumbs down, I'm afraid.

We'll advance further in the alphabet in our next episode.  Aldiss is our star player so far, we'll see if anybody can unseat him.
Posted by MPorcius at 1:51 PM