Rogue in Space by Fredric Brown

Maybe gambling would be the answer, if he could find an honest game so he could enjoy it.  But finding an honest gambling game in Mars City--or in most other places in the system--was almost as hard as finding an honest woman.  Maybe there wasn't any such thing.  There was no honesty anywhere, not only not in gambling or women, but not in politics, business or anything else. 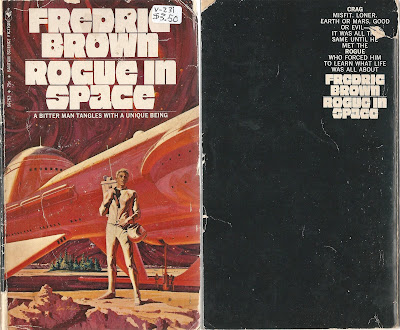 Stalking the aisles of a Des Moines antique mall I spotted this 1971 printing of Fredric Brown's Rogue in Space, a fix-up novel first published in book form in 1957. Even though the last thing I read by Brown, a short story about a man-eating armadillo, was just OK, Brown was championed by big league scribblers Ayn Rand, Mickey Spillane and Robert Heinlein, so I felt like he deserved my attention, and that three and a half dollars wasn't too much to pay (though it was close!)

Rogue in Space is set in a dystopian future in which mankind has colonized the solar system.  How dystopian is it?  For starters, Albuquerque is the capital of the solar system!  Besides that, while democratic forms are preserved as a charade, the solar system is corruptly administered by the leading political party, a bunch of commies called "the Guilds," and the second place party, a bunch of fascists known as "the Gilded."  Not only is this society's politics tyrannical, arbitrary and corrupt, its culture is perverse and decadent.  The music is loud, simple and stupid; TV screens are several feet across and broadcast a wide variety of pornography; and homosexuality, voyeurism, prostitution, and necrophilia are rampant and accepted, even embraced, by the elite.  (Obviously Brown in the 1950s and a reader in the 21st century may have different ideas of what constitutes a perversity.)

What characters do we follow in this twisted world Brown has created for us?  Well, our main characters are a rock and a career criminal.  Yes, I said "a rock!"

Brown starts the novel off well with descriptions of his two main characters, who are compelling because they are so unusual.  On the first page of text we are told that life has appeared in the universe in only two places, on Earth and in a far corner of the galaxy, where a planetoid a mile wide achieved consciousness.  This rock is driven by its curiosity to explore the galaxy, and after billions of years of travel it approaches our solar system. 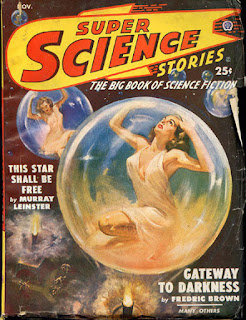 Brown based Rogue in Space on two of his short stories. The rock, which I was so excited to meet in the two-page introductory chapter, did not appear in the first story, "Gateway to Darkness" (printed in Super Science Stories in 1949), and so doesn't appear in this 163-page novel again until page 83.  Luckily we have our second main character to keep us company, a man called Crag.  Crag is a master thief and murderer who kills people with his robotic left hand.  Crag hates women, Crag hates homosexuals, Crag hates everybody, and over the course of the book we see him insult women, vandalize a gay couple's pornography collection, physically assault a male prostitute, and kill police in cold blood.  Crag is what the kids call "a hater."  Does he love anything?  Well, he loves to get drunk on the most exotic and expensive kinds of booze, and we see him do that as well.

Brown wrote crime stories as well as SF, and the first half of Rogue in Space is a crime caper in which Crag does stuff like pick locks, sneak into buildings, escape a prison, and get double-crossed.  The pace is fast, there are lots of cool SF trappings like space suits, space ships, and ray guns, and Crag, being an absolute jerk, is an interesting character, so I enjoyed this first portion of the novel, even if I was eager to get back to the sentient rock.

In that first half Crag falls into the orbit of the foremost politician of the Gilded, a man known as Olliver.  Olliver serves as a judge in Albuquerque, and has contrived to be the judge in a criminal case in which Crag is the defendant.  Olliver and his gorgeous wife Judeth help Crag escape prison and the "psycher," one of those devices we find in SF crime stories which erases your criminal personality and turns you into a law-abiding citizen.  Olliver and Judeth hire Crag to disguise himself and sneak into a genius's fortified laboratory on Mars to steal a disintegrator.  This device is so powerful it can disintegrate entire planets!  Olliver and Judeth have been telling Crag they want the disintegrator to finance the founding of a new political party, one which is sincerely devoted to democracy.  But when the three of them are on an asteroid, there to test the disintegrator, Olliver reveals that he doesn't really want to restore good government--he plans to use the disintegrator to become dictator of the solar system! Judeth and Crag won't stand for this, and kill Olliver.  Crag and Judeth admit they have a thing for each other, but have no opportunity to consummate their relationship because they are stranded on the asteroid, their ship having drifted away during the excitement.  First Judeth, and then Crag, run out of oxygen and die! 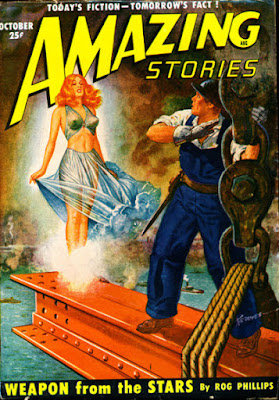 Us law-abiding types are always relieved when murderers and thieves like Crag die at the end of stories.  Justice has been served by the cosmos!  But wait!  My hero the sentient rock appears and brings Crag back to life as the second half of the novel (that corresponding to the second Crag story, "Gateway to Glory" from Amazing in 1950) begins!  Rock, what are you doing?  Maybe, as a rock who has never before encountered life, my hero doesn't know the difference between good and evil yet, and doesn't realize he should be using his godlike powers (he can manipulate any amount of matter at the atomic level) to provide restitution to Crag's victims, not bring Crag back to life?  Or maybe the rock knows that one should, as the kids say, "not hate the player, but hate the game."

Apparently believing Crag is good on the inside, and has devoted his life to stealing, killing and drinking because of his environment (society made him do it!), the rock wants to be Crag's friend!  But instead of being thrilled by this First Contact, Crag tells the rock to leave him alone and flies back to Mars (the rock has summoned the ship back) to spend the money Olliver paid him on booze!  But Crag doesn't enjoy being rich; Brown does a good job of portraying a man who finds a life without risks or goals to be lacking.  While Crag is moping around bars and hotels, the rock alters the orbits of every asteroid in the asteroid belt so that they coalesce into a new planet! The government tries to investigate the new world, but is prevented by force fields and other phenomena.  The rock has made the planet for Crag, even manipulating the brain of the scientist who names the new heavenly body so that he will christen it "Cragon!"

Crag has made friends with a fellow criminal.  When this joker gets cornered by the fuzz during a jewel heist, Crag rescues him and, along with the jewel thief's cronies, they fly to Cragon, which they find to be a paradise!  No cops, no TV, no booze, no people, just the chance to start a new world, a place to build adobe huts, hunt and fish, sit and watch the fire and the stars.  To misanthrope Crag, disillusioned with the life of luxury that money can buy and disgusted by the pervasive sexual perversity of Earth and Mars, this may sound like a paradise (he realizes he doesn't need booze out here, that he used to get drunk to escape the pressures of human society) but the jewel thief and his hangers on don't want to live a primitive existence.  They take the ship and leave Crag alone, but Crag is not alone for long--the rock is able to recreate Judeth! Crag and Judeth live happily ever after on Cragon, watched over by the rock.

Rogue In Space is pretty good.  Isn't part of the attraction of science fiction crazy characters, crazy settings and crazy capers?  Well, Brown delivers with main characters who are an intelligent rock and a murderous bigot who, we are supposed to believe, is a good person warped by an evil society, their bizarre relationship, and a depiction of (what Brown thinks is) a sick civilization.

Should we think of Rogue in Space as a satire of post-war life and society, or a warning that American society was headed in the wrong direction ?  Did Brown think 1950s pop culture was insipid and potentially a powerful negative influence?  That criminals, as rebels against society, are no worse, and perhaps better, than the rich and powerful, who are selfish and corrupt?  That the post-war boom was making life, which had been so challenging during the Depression and war years, dull, and making people soft, susceptible to decadence?  These kinds of questions add an additional level of interest to the novel, which already is a satisfying crime/adventure story about a man redeemed by friendship.  (Speaking of redemption, should we think of Rogue in Space as a Christian story, with the rock as God or his Son?)

I'd definitely recommend Rogue in Space--Ayn Rand, Mickey Spillane and Robert Heinlein did not steer me wrong!
Posted by MPorcius at 10:08 AM