The Visual Encyclopedia of Science Fiction edited by Brian Ash 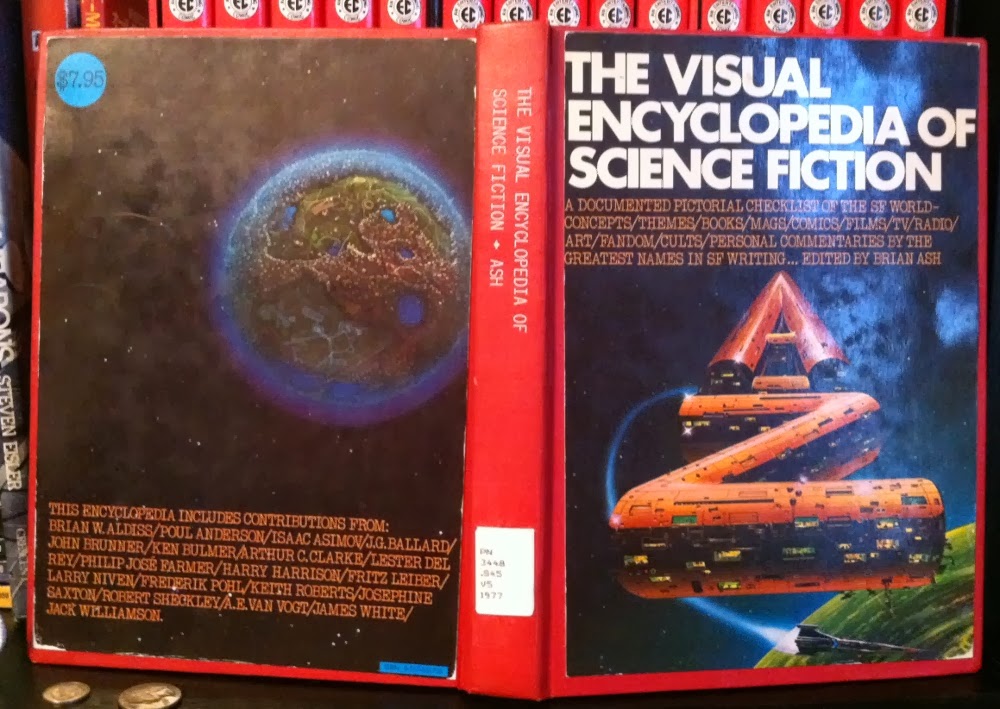 Tarbandu at the PorPorBooks blog recently has featured the cover of Brian Ash's Visual Encyclopedia of Science Fiction on his site, and blogged about the similar Encyclopedia of Science Fiction edited by Robert Holdstock. Drake University has a copy of the Ash volume (sadly, the spine is quite broken and the pages threaten to achieve their liberty at any moment) and I spent some time looking through it. 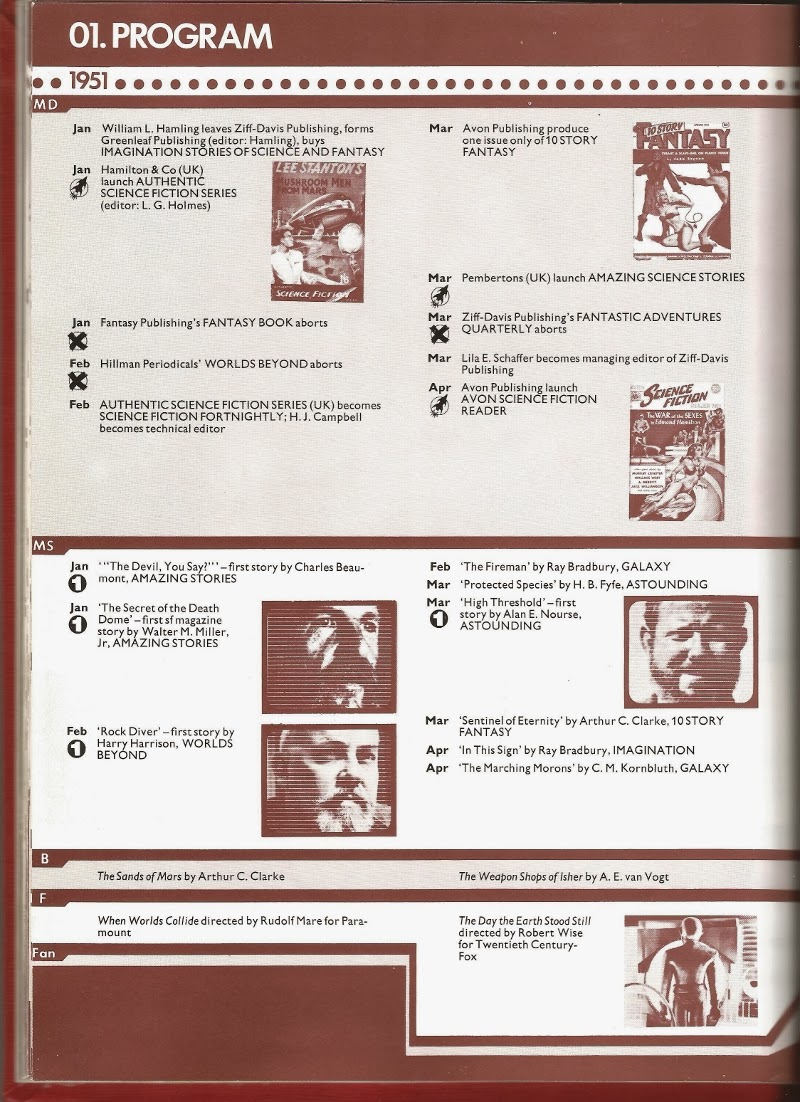 After like 60 pages of timeline (called "Program"), listing major events in SF in from 1805 to 1976, the book is organized by themes (or as the book calls them, "Thematics") such as "Robots and Androids," "Mutants and Symbiotes," and "Warfare and Weaponry." This is the heart of the book, in which numerous stories and books are described. Then we get essays on topics like "Science Fiction as Literature," and "The Value of Science Fiction" in the "Deep Probes" section, and finally discussion of "Fandom and Media." Many of the sections of the book are written or introduced by recognizable SF authors and editors, including such important figures as Asimov, Anderson, and Pohl. This being a British book, British authors are well represented, including not only big names like Brian Aldiss and J. G. Ballard, but some I feel like I don't hear much about, such as Ken Bulmer and Edmund Cooper. 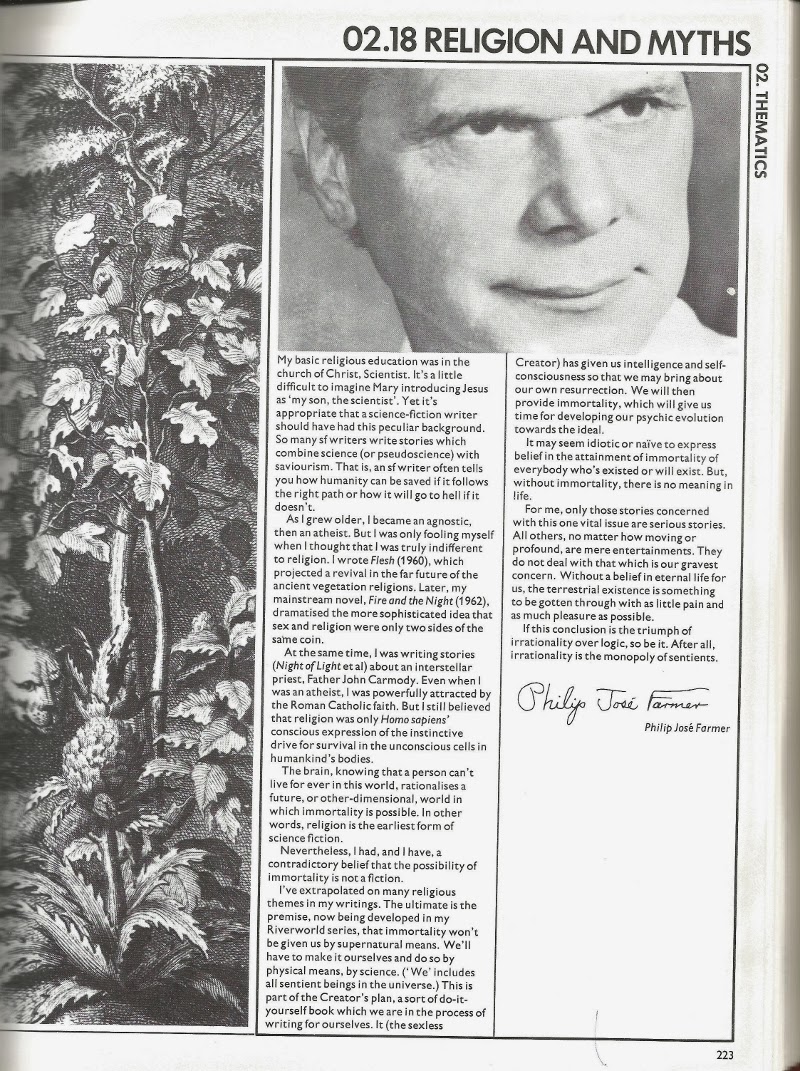 All 19 of the "Thematics" are introduced by "name" SF writers.  A. E. Van Vogt's contribution is characteristically bizarre; my man Van barely addresses the issue he was asked to talk about, espouses some of his weird theories, and actually calls out the people who produced the book he is writing for, saying "I observe that my current work is not appreciated by British critics of the genre; but it sells well...." Zing! Philip Jose Farmer writes about his religious beliefs, asserting that if we are not immortal, life has no meaning. Ouch! Ken Bulmer's contribution is all over the place; he decries technology as evil, complains that in SF "artefact" is usually spelled "artifact," and takes time out from his pessimism party to praise SF artists for their "honourable labour." The photo of Bulmer reminded me that I need to shave and get a haircut.

(I'll list all the Thematics and their introducers below the fold, as newspaper people say.  All you fashionistas will find Ken Bulmer's photo down there, too.  Get your clippers ready. ) 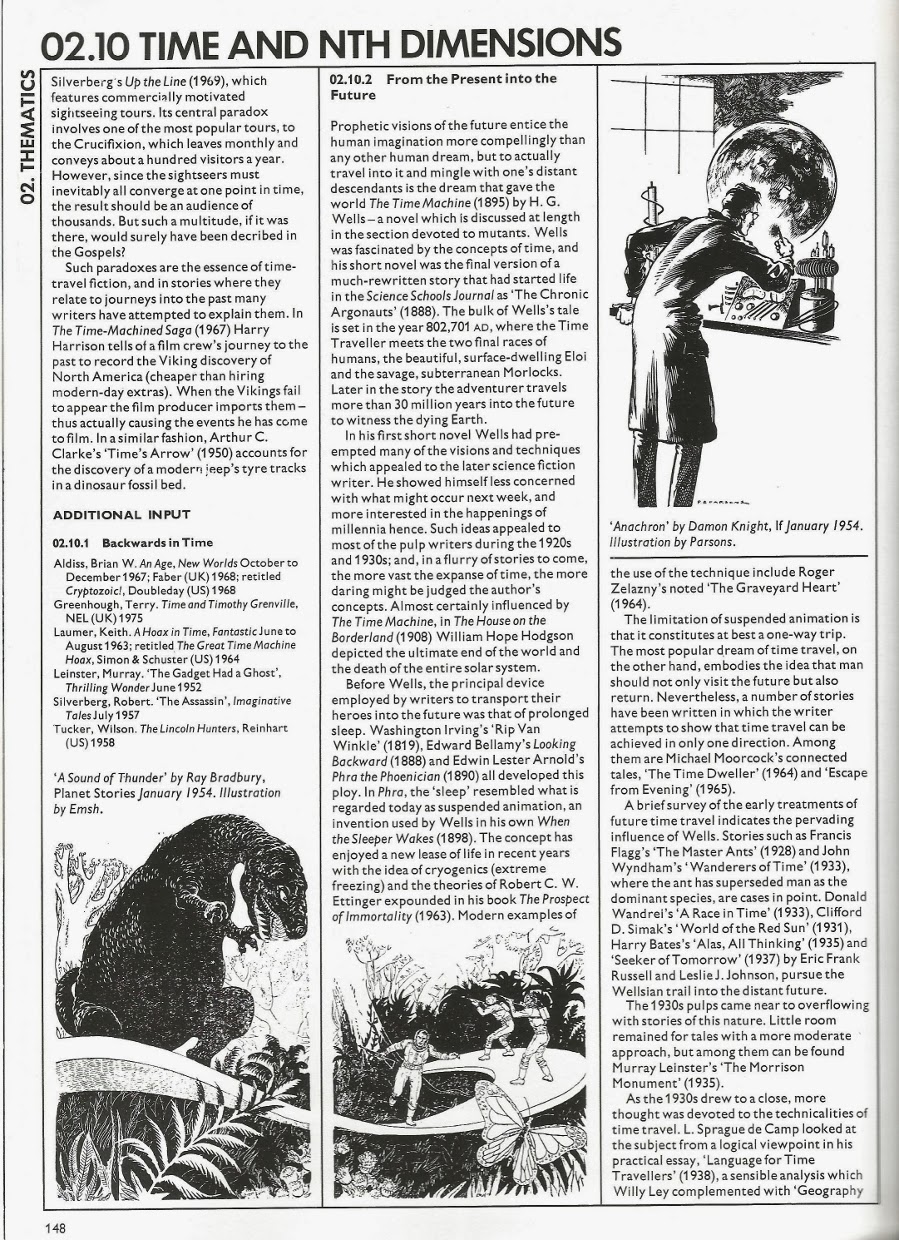 I don't really like the design of The Visual Encyclopedia of Science Fiction.  The font is tiny and ugly and the pages feel crowded and cramped (every single page has a horizontal heading at the top of the page and most have a vertical heading on the outside margin.) There are many illustrations, mostly book covers and magazine illustrations, which of course is great, but I thought many of them mediocre.  I also don't understand why some particularly weak illustrations, like a panel from a Barbarella comic, are allowed to take up an entire page.  On the plus side, any illustration you haven't seen before has some kind of information value, and this book is full of illos I have never before encountered. There are many photos of author's faces, and, adding to the cramped feel of the book, many of them are cropped very close, the writer's chin and forehead beyond the borders of the image.

As with the illustrations, the text, even when I don't think the style is good, is full of interesting information about books, stories, and authors I have never heard of.  And the 19 Thematics intros provide some kind of insight into the character of writers with whom we may be familiar primarily through their fiction.  The Visual Encyclopedia of Science Fiction is definitely worth a look for classic SF fans, even if I don't grok some of its artistic and design decisions and I think some of the Thematics intros are wacky. 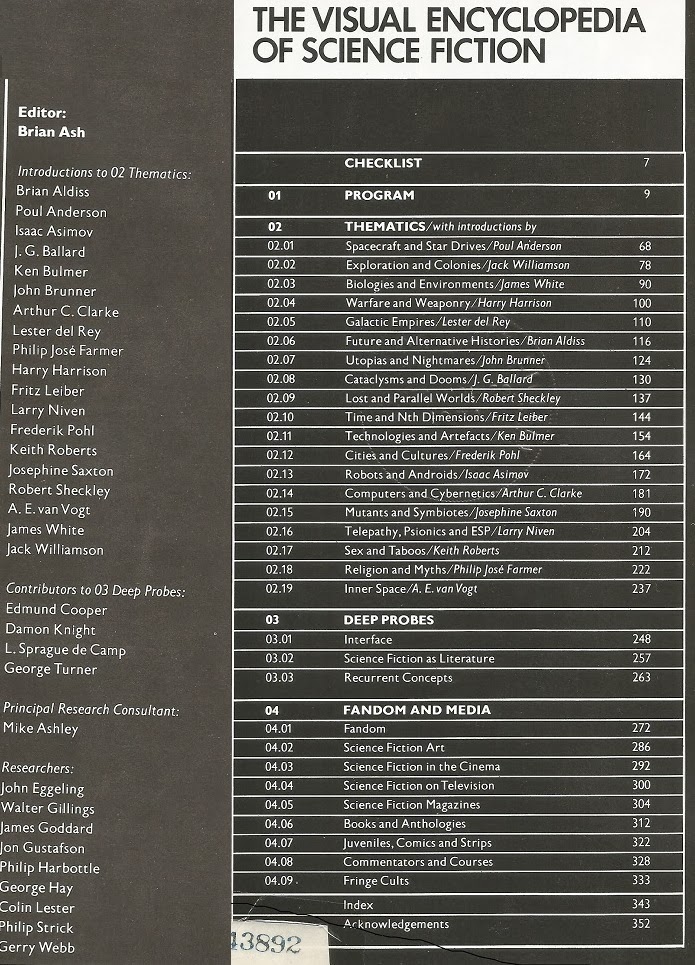 Poul Anderson passionately advocates for space exploration, comparing it to love and even sex (watching a rocket launch is like an orgasm, he claims.)  Anderson also warns that our civilization is doomed if we don't exploit extra-terrestrial resources.

Jack Williamson's essay is a charming love letter to SF - he always seems like such a nice guy.  He tells us again the two things we all already know about Williamson, that his family moved in a covered wagon when he was a kid and that he coined the term "terraforming."

James White expresses enthusiasm about meeting alien beings.  Dismissing all our fears that aliens might devour, enslave, or just disintegrate us, he argues that meeting aliens is vital if mankind is to "mature as a species," and that alien contact might solve such Earthly problems as political strife and racism.

Harry Harrison hopes that SF, which he believes is at the forefront of intellectual fiction, has the vital function of convincing people to abandon "national rivalries and technological warfare."  He tells us that action-adventure SF should be tolerated, so it can attract new readers to SF who will hopefully graduate to the more cerebral SF. 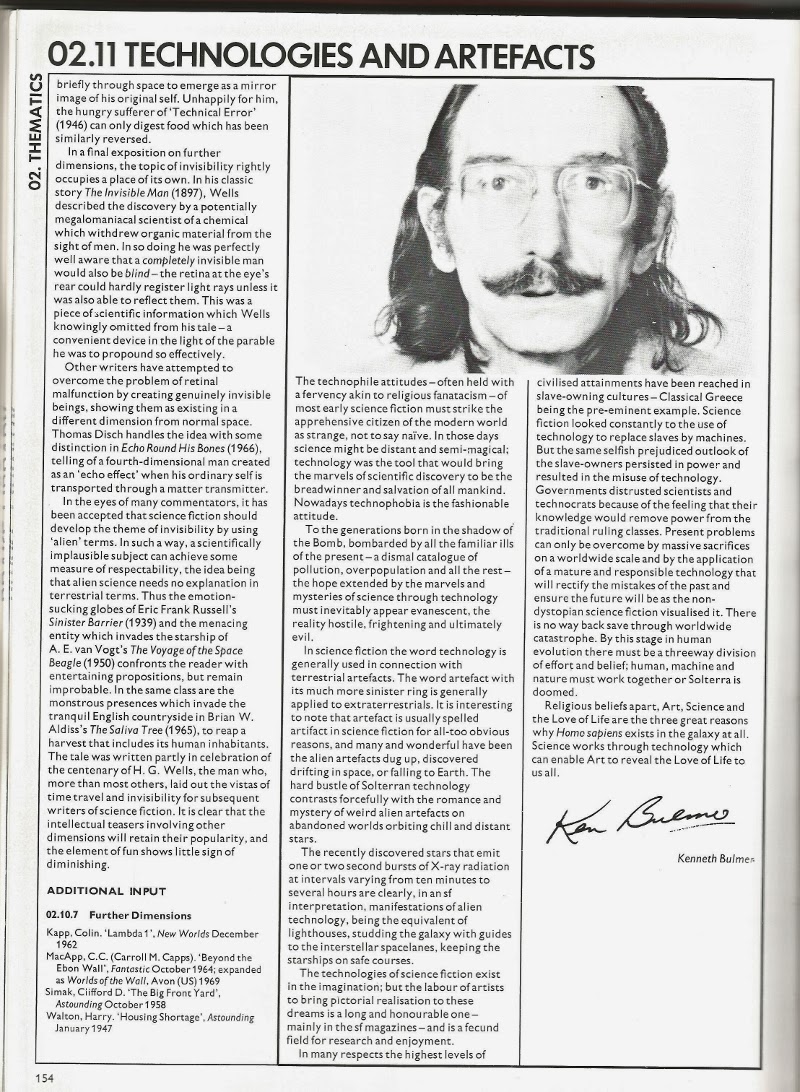 Lester del Rey explains why a multi-solar system government is probably impossible, or, if possible, won't be democratic.

Robert Sheckley's intro is just a sort of in-joke for SF fans.

Brian Aldiss plugs his own alternate reality book, Malacia Tapestry, and argues that because their "keynote is irony rather than wonder," that alternative world stories are more sophisticated than interplanetary tales.  He also calls Norman Spinrad's famous Iron Dream a "laborious and academic joke" - is that a compliment?

John Brunner asserts that the utopia and the dystopia are distinctly Western forms.  On a personal note he informs us that he prefers the French term "prognostics" to the English "futurology."

J. G. Ballard tells us that he believes SF to be a small offshoot of the millenia-old "cataclysmic tale" and that studies of the dream lives of insane people indicate that "ideas of world destruction are latent in the unconscious mind."  Then he, reassuringly, asserts that the cataclysmic tale is, in fact, a celebration of the possibilities of life.

Frederick Pohl praises SF for its ability to provide an outside perspective on our society; in particular he promotes Aldiss's The Dark Light-Years as providing insight on religion.  Seeing as he wrote the intro to the "Cities and Cultures" section, I had been hoping Pohl would defend city life, as he did in the anthology Future City, edited by Elwood.  (Our love of city life is one of the few things on which Fred Pohl and I see eye to eye.)  The city needed defending after Clifford Simak's convincing pastoralist and futurist attack on the city in that same anthology.

Isaac Asimov brags that he invented the word "robotics" and revolutionized the robot story at age 22, though he gives some credit to John Campbell when he tells how he came up with the famous Three Laws.

Arthur C. Clarke talks about computers and AIs.  He suggests that when AIs appear they will be as superior to us as we are to animals, and the way they treat us will constitute "poetic justice."  Yikes.

Josephine Saxton is the sole woman represented, and I have to say I have never heard of her.  Her entry appears to be, in part, a joke, and refers to numerous intellectuals of whom I have also never heard, like Velikovsky, Kammerer, Gurdjieff, Ouspensky, and Rom Landau.  She indicts Charles Darwin (him, I've heard of) for being crazy and opposed to birth control.  The last line of Saxton's piece is, "Did your mother only breast-feed one of your heads?"

Larry Niven claims that stories about psychic powers are like alternative histories; they have been done to death because they are too easy to write.  Larry, what about Malacia Tapestry?

Keith Roberts, for some reason, has no author photo attached to his intro to the "Sex and Taboos" section.  I hope this is some meta-joke about him being afraid of having his soul stolen by the camera. Roberts seems like a guy who likes to rock the boat; he claims Fred Pohl bowlderized him, and that the "New Wave" (which Roberts refuses to capitalize) was nothing but a PR stunt of Judith Merril's, and never amounted to much.  (He calls Merril, "Judy.")  When he claims SF writers have always had hangups about women he refers to Bradbury's "The Silent Towns" as evidence.  Roberts tells us he has tried to show women realistically in his work, and that women are so wonderful there is no need to do anything but show them realistically.  I guess this is a guy who likes to rock the boat but can also suck up when required.

Almost all the Thematics intros are either interesting and useful, or so silly as to be entertaining, which I guess sums up the Visual Encyclopedia of Science Fiction as a whole.
Posted by MPorcius at 3:47 PM